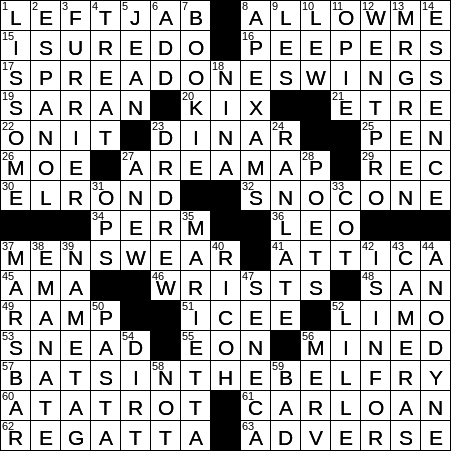 We have a mini-theme and some grid art today. Several of the black squares represent WINGS or BATS:

That would be boxing, and a one-two punch, or should it be punches?

The historic region of Attica is home to the city of Athens. Attica comprises a peninsula in the southwest of the country that juts out into the Aegean Sea. As a result, the region is sometimes referred to as the Attic peninsula.

In the myth of Theseus and the Minotaur, Theseus sailed to the island of Crete in order to convince the Minotaur to stop devouring young boys and girls who were sent into the Minotaur’s lair, the Labyrinth. Soon after Theseus landed on Crete, he fell in love with Ariadne, the daughter of Minos, the King of Crete. Ariadne gave Theseus a ball of string that he unraveled as he ventured deep into the Labyrinth. He found the Minotaur and slew him, and then followed the unraveled string back to the entrance of the Labyrinth, and into the arms of Ariadne.

57 Mental eccentricity … as suggested visually by some of this grid’s black squares : BATS IN THE BELFRY

62 Meet at the river, perhaps : REGATTA

8 Things you can get credit for : AP EXAMS

Aunt Bee is a character in “The Andy Griffith Show”. The character’s full name is Beatrice Taylor but everyone in Mayberry calls her “Aunt Bee”. In the storyline, she is the aunt of protagonist Sheriff Andy Taylor, and is great-aunt to Andy’s son Opie. Aunt Bee was played by actress Frances Bavier.

Poets’ Corner is an area in Westminster Abbey in London that earned its name from the high number of poets buried and commemorated there, as well as playwrights and authors. The first poet interred there was Geoffrey Chaucer. Also in Poets’ Corner are the remains of Edmund Spenser, Robert Browning, Charles Dickens, John Dryden, George Frideric Handel, Thomas Hardy, Samuel Johnson, Rudyard Kipling, Laurence Olivier and Alfred, Lord Tennyson. Wow!

Having lived on both sides of the Atlantic, I find the Mars Bar to be the most perplexing of candies! The original Mars Bar is a British confection (and delicious) first manufactured in 1932. The US version of the original Mars Bar is called a Milky Way. But there is a candy bar called a Milky Way that is also produced in the UK, and it is completely different to its US cousin, being more like an American “3 Musketeers”. And then there is an American confection called a Mars Bar, something different again. No wonder I try not to eat candy bars …

Something described as “anodyne” is analgesic, capable of removing pain. “Anodyne” comes from the Greek “an-” meaning “without” and “odyne” meaning “pain”.