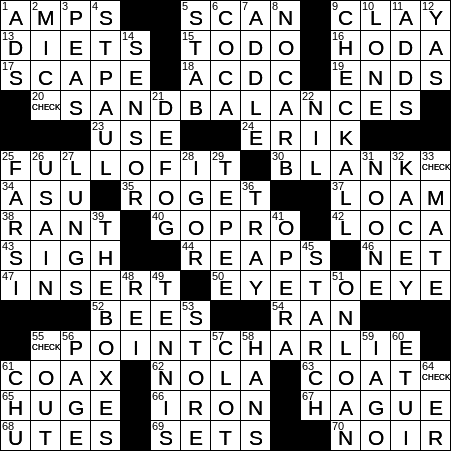 Constructed by: Hoang-Kim Vu
Edited by: Will Shortz

We have a rebus puzzle today, with the word “CHECK” filling four of the BOXES:

Hoda Kotb is an Egyptian-American television journalist who is perhaps best known as co-host of the NBC morning show “Today”. She is also the author of the bestselling autobiography “Hoda: How I Survived War Zones, Bad Hair, Cancer, and Kathie Lee”.

Checkpoint Charlie was the most famous crossing point in the Berlin Wall, between the East and West. Originally designated as “checkpoint C”, it was quickly termed “Checkpoint Charlie” from the C-designation in the NATO phonetic alphabet.

There are eight tokens included in the game of Monopoly as of 2013. These are the wheelbarrow, battleship, race car, thimble, boot, Scottie dog, top hat and cat. The latest to be introduced was the cat in 2013, replacing the iron. The battleship and the cannon (aka “howitzer”, now retired) had been added to the Monopoly game as part of a recycling exercise. The pieces were intended for the game “Conflict” released in 1940, but when Parker Bros. pulled “Conflict” off the market due to poor sales, they added their excess battleships and cannons to Monopoly.

The International Court of Justice (ICJ) is commonly referred to as the World Court, and is based in the Hague in the Netherlands. Housed in a building known as the Peace Palace, the ICJ is the main judicial branch of the United Nations. One of the court’s functions is to settle disputes between UN member states. The US no longer accepts the jurisdiction of the ICJ, after the court’s 1986 decision that the USA’s covert war against Nicaragua was in violation of international law. The UN Security Council is charged with enforcing the ICJ rulings, and so the US used its veto power in the Nicaragua v. United States case.

3 Food that may be puréed for babies : PEAS

4 Capital on the Mississippi : ST PAUL

8 Like many popular 13-Across : NO-CARB
(13A Subjects of many nonfiction best sellers : DIETS)

“Farsi” is one of the local names for the Persian language.

28 Assistant in a horror film : IGOR

31 Who has been nominated for more acting Oscars than Meryl Streep : NO ONE

Kacey Musgraves is a country singer from Golden, Texas.

41 Work of Bellini or Gounod : OPERA

Charles Gounod was a French composer from Paris. Gounod’s most frequently performed work is his setting of the Latin text “Ave Maria”. When Gounod passed away in 1893, two famous French composers attended his funeral service. Camille Saint-Saëns played the organ and Gabriel Fauré conducted the orchestra.

In William Shakespeare’s play “Othello”, Iago utters the words “The Moor already changes with my poison.” Iago is celebrating the fact that Othello’s mind has already become infected with iago’s devious suggestions.

Steven Chu is a former Secretary of Energy in the Obama Cabinet. Chu is a physicist by trade, and a winner of the Nobel Prize in Physics in 1997.