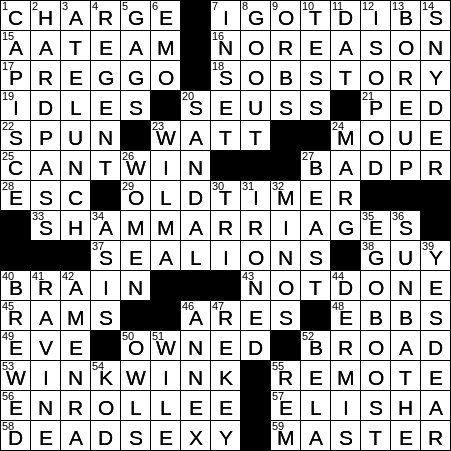 The verb “to mug” means to make an exaggerated facial expression. The term comes from mugs used to drink beer (called Toby mugs) that are made in the shape of heads with grotesque expressions. “Mug” can also be a noun meaning “face”.

Not dis, but dat!

Wilma is the wife of cartoon character Fred Flintstone. On the TV show, Wilma was voiced by Jean Vander Pyl. Vander Pyl was also provided the voice for Rosie the Robot on “The Jetsons”.

32 Mythological judge of the dead in the underworld : MINOS

34 Clearance caveat : AS IS

“Caveat emptor” is a Latin expression meaning “Let the buyer beware”. It is used when someone buys something, emphasizing that after the deal is closed, there’s no going back.

42 Supreme god of the universe, in ancient Egypt : AMEN-RA

Much of an owl’s diet consists of small mammals. As a result, humans have used owls for centuries to control rodent populations, usually by placing a nest box for owls on a property. Despite the fact that owls and humans live together in relative harmony, owls have been known to attack humans from time to time. Celebrated English bird photographer Eric Hosking lost an eye when attacked by a tawny owl that he was trying to photograph. Hosking wrote an 1970 autobiography with the wry title “An Eye for a Bird”.