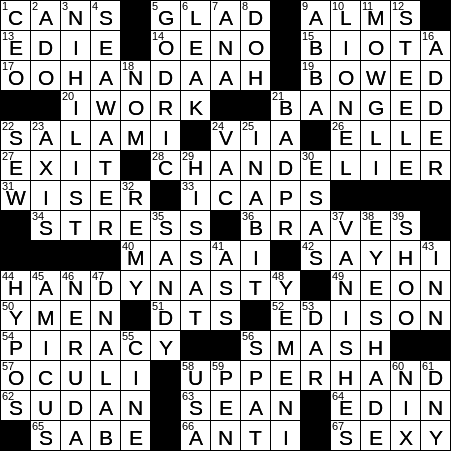 Constructed by: Michael Blake and Jeff Chen
Edited by: Will Shortz

Themed answers are preceded by the word HAND, which resides in the row above in the grid:

The Elle Style Awards have been presented annually since 2002, by “Elle” magazine.

The noun “handicap”, an advantage or disadvantage in a competition, comes from the phrase “hand-in-cap”, which was the name of an Old English trading game. In the game, two players agree to trade two possessions. The players and a referee all put some forfeit money into a cap, forming a kitty that can be won. The referee determines the value of the items and declares any difference in worth, an amount that has to added by the owner of the lower-valued item so that the trade is “equal”. The players then put their hands into their pockets and draw out a token coin(s) at the same time, signalling that they agree with the valuation given. If agreement is reached, the referee collects the forfeit as a “fee” and the items are exchanged. If neither player agrees with the valuation they withdraw empty hands from their pockets, then the referee collects the fee and no exchange is made. If only one player agrees to the exchange, then that player collects the forfeit, and again no exchange is made.

SunTrust Park is the baseball stadium that has been home to the Atlanta Braves since 2017. The Braves had been playing in Turner Field since 1997, which was a stadium built for the 1996 Summer Olympic Games.

The Masai (also “Maasai”) are a semi-nomadic people found in Kenya and Tanzania. They are semi-nomadic in that over the years they have been migrating from the Lower Nile Valley in northwest Kenya, and are moving into Tanzania.

44 Preceder of the Three Kingdoms, in Chinese history : HAN DYNASTY

During the Three Kingdoms Period in Chinese history, there were three kingdoms vying for control of China. The three competing kingdoms were Wei, Shu and Wu.

George Westinghouse was an American engineer and businessman, and a rival to Thomas Edison in developing the first robust electrical grid for the country. Edison’s approach was to distribute electrical power using DC current, but Westinghouse opted to partner with Nikola Tesla and worked with AC current. AC technology won the day!

63 Parker who was the first president of Facebook : SEAN

1 Title also held by many a co. president : CEO

3 One whose guiding philosophy is “What does it matter?” : NIHILIST

Michael Steele served as Chairman of the Republican National Committee from 2009 to 2011 and was the first African American to fill the post.

21 Cause for damage control : BAD PR

Remy Martin is my favorite brand of cognac (remember that when it’s my birthday!). In China, the name Remy Martin is not used, but rather the more colorful moniker “man-headed horse” which describes the centaur logo on the bottle.

45 Kind of brief in court : AMICUS

48 Dweller on the Arabian Peninsula : YEMENI

Yemen is located on the Arabian Peninsula, and lies just south of Saudi Arabia and west of Oman. Yemen is the only state on the peninsula that is a republic (its official name is the Republic of Yemen). Everyone over the age of 18 gets to vote, but only Muslims can hold elected office. Yemen has seen many rebellions over the centuries, and has been suffering through a Shia uprising since February 2015.

Chuck Schumer is the senior US Senator from New York, and a Democrat. Schumer was elected Senate minority leader in 2016 following the retirement of Harry Reid. Schumer is a second cousin, once removed of comedian and actress Amy Schumer.

Kirsten Gillibrand is a US Senator from New York, and a member of the Democratic Party. Gillibrand was serving as a member of the US House of Representatives when she was appointed to the Senate by Governor David Paterson in 2009 after Senator Hillary Rodham Clinton left office to serve as Secretary of State.