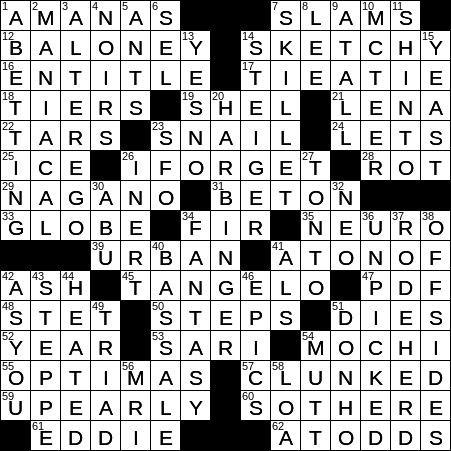 Themed answers require us to take OFF the letters at the SIDES, the start and finish, in order to make sense of the clue:

A ketch is a sailboat with two masts. The most forward mast is the mainmast, and is the taller of the two. The smaller mast is further aft, and is known as the mizzen mast.

English actress Lena Headey is best known for playing Cersei Lannister on the fantasy series “Game of Thrones”. Although a British citizen, Headey was actually born Bermuda, where her father was stationed as a police officer.

That would be tennis, I think.

48 Instruction to a typesetter : STET

A light-year (lt. yr.) is a measure of distance, not time. It is the distance that light travels in a vacuum in one year, which is almost six trillion miles. The accepted abbreviation for a light-year is “ly”. A light-second is a much shorter distance: about 186,000 miles.

53 Dress that may leave the midriff exposed : SARI

“The Hustler” is a 1961 movie about the dark side of game of pool that is an adaptation of a novel of the same name by Walter Tevis. Paul Newman stars as small-time hustler Fast Eddie Felson, and Jackie Gleason as legendary player Minnesota Fats. Famously, Newman reprised the role of Fast Eddie in the 1986 film “The Color of Money”, for which he won his a Best Actor Oscar.

1 What an accomplice may be doing : ABETTING

In French, an “oeuf” (egg) is the main ingredient in “une omelette” (an omelet), which may be seasoned with “sel” (salt).

Rod Steiger played some powerful roles on the screen, perhaps most memorably the Chief of Police in the 1967 drama “In the Heat of the Night” for which he won a Best Actor Oscar. Steiger was married five times, including a 10-year marriage to fellow actor Claire Bloom. Together Bloom and Steiger had a daughter, the British opera singer Anna Steiger.

To ride herd on is to supervise someone, usually a group of people.

The Unser family seems to have auto racing in their blood. Al Unser, Sr. won the Indy 500 on four occasions. Al’s brother Jerry was the first of the Unsers to compete at Indianapolis. Al’s other brother Bobby, won the Indy three times. Al’s son, Al Junior, won the Indy twice. Al Junior’s son is also a racing driver who competes at the Indy Speedway.

51 Crooner with a ukulele : DON HO

The singer and entertainer Don Ho apparently had a pretty liberal arrangement with his wife. When Ho was touring with his two backing singers, Patti Swallie and Elizabeth Guevara, all three of them shared a room together. He had two children with each of his roommates, giving a total of ten kids including the six he had with his wife. The arrangement was quite open, it seems, with all ten kids visiting each other regularly. To each his own …