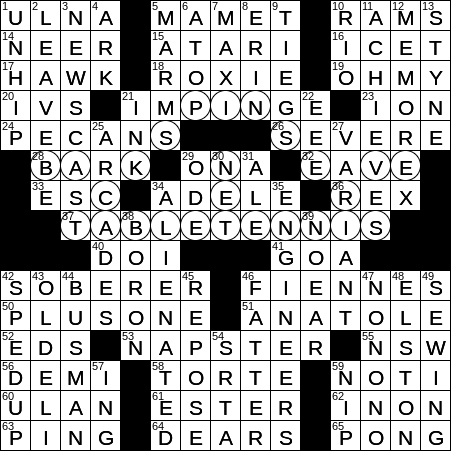 Themed answers each related to the sport of TABLE TENNIS. The circled letters in the grid spell out, and represent, a TABLE (TENNIS), NET, and BACKSPIN SERVE:

“Glengarry Glen Ross” is a 1992 film adapted by David Mamet from his own award-winning stage play of the same name. This is a film with a very strong cast, including Al Pacino, Jack Lemmon, Alec Baldwin, Ed Harris, Alan Arkin and Kevin Spacey. The title comes from two real estate developments being pushed by the sales office, namely Glengarry Highlands and Glen Ross Farms.

One might see an intravenous drips (IV) in an intensive care unit (ICU) or an operating room (OR).

46 Ralph who played Voldemort in the Harry Potter films : FIENNES

English actor Ralph Fiennes comes from a very aristocratic family, as one might guess from his full name, Ralph Nathaniel Twisleton-Wykeham-Fiennes. He is in fact an eighth cousin of Charles, Prince of Wales, heir to the British throne. Fiennes has played some nasty characters in his time, including the commandant of the concentration camp in “Schindler’s List” and the dreaded Lord Voldemort in the “Harry Potter” movies.

“Anatole France” was the pen name for French poet and novelist François-Anatole Thibault. France won the Nobel Prize for Literature in 1921.

Cheryl Tiegs was only 17-years-old when she appeared as a model on the cover of “Glamour” magazine. After that Tiegs became famous for sequential appearances in the “Sports Illustrated Swimsuit Issue” throughout the seventies.

Memorex is a brand of data storage products owned by Imation. Memorex started out in 1961 in Silicon Valley as a company making computer tapes, eventually adding storage disks and other media to its portfolio of products. A famous advertising campaign featured singer Ella Fitzgerald singing a note that shattered a glass. A recording of that note was then played, which also shattered the glass. The tag line to the ad became very famous: Is it live, or is it Memorex?”

13 Jule who wrote the music for “Funny Girl” : STYNE

Skee-Ball is that arcade game where you roll balls up a ramp trying to “bounce” it into rings for varying numbers of points. The game was first introduced in Philadelphia, in 1909.

38 Element before carbon on the periodic table : BORON