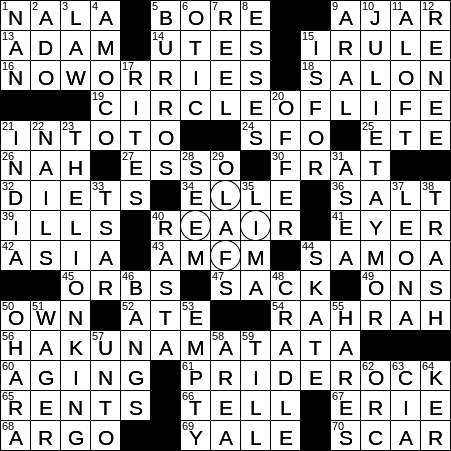 Themed answers all relate to the musical film “THE LION KING”. Also, four circled letters in the center of the grid spell out “LIFE”, and represent the song from the musical “CIRCLE OF LIFE”:

16 56-Across, roughly translated : NO WORRIES

(56A Song from 23-Down : HAKUNA MATATA)
“Hakuna matata” is a Swahili phrase, with a literal translation of “there are no worries”, or more colloquially perhaps, “no problem”. The phrase is used as the title for a hit song from the musical “The Lion King”.

The Bastille is a former fortress in Paris that was used as a prison by the kings of France. On 14 July 1789, an angry mob stormed the Bastille during the French Revolution. The mob was actually after the stores of gunpowder in the fortress, but while inside the building freed seven prisoners and killed the Bastille’s governor. The storming of the Bastille became a symbol of the French Revolution and has been celebrated in France on every July 14th since 1790. That celebration is referred to as “la fête nationale” (the national day) in France, but in English-speaking countries it is usually known as “Bastille Day”.

42 Only continent larger than Africa : ASIA

To spill the beans is to divulge a secret. The expression first appeared in American English, in the early 1900s. The phrase arose as an alternative to “spoil the beans” or “upset the applecart”.

1 One of the Bobbseys, in children’s literature : NAN

Martial law is military rule imposed usually as a temporary measure when civilian rules appears to be failing. The imposition of martial law often involves curfews, suspension of civil rights and the use of military justice.

Our word “burro”, meaning donkey, comes from the Spanish word for the same animal, namely “burrico”.

10 Director of 23-Down on Broadway : JULIE TAYMOR

Julie Taymor is a director of movies, and of opera and theater productions. Taymor’s best-known work is the stage musical “The Lion King”. She also directed William Shakespeare’s “Titus Andronicus” on the stage, and brought the play to the big screen as the 1999 feature film “Titus”.

The vast Asian country of India takes its name from the Indus River. The name “Indus” in turn comes from the Sanskrit “Sindhu” that can be translated as “a body of trembling water”. India is the second-most populous country in the world (after China), and the most populous democracy.

“Bangs” is another word that caught me out when I arrived in the US. “Bangs” back in Ireland are called “a fringe”. Apparently the US term is derived somehow from the hair on a horse’s head.

63 Org. behind the Bay of Pigs invasion : CIA