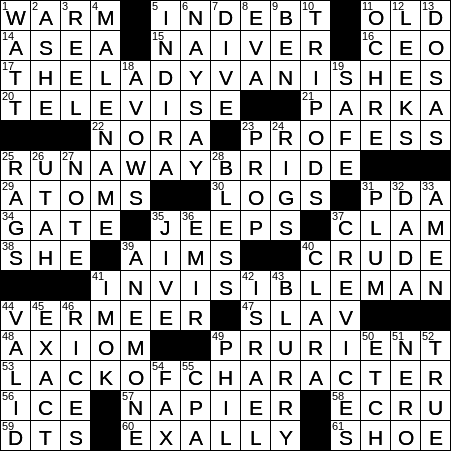 Themed answers are movies in which a CHARACTER disappears:

“The Lady Vanishes” is a classic 1938 Alfred Hitchcock movie that is based on a 1936 novel “The Wheel Spins” by Ethel Lina White. Stars of the film is Margaret Lockwood, who plays an English tourist on a trans-European train journey who finds herself looking for a lady who she believes has vanished from the train. Hitchcock makes his trademark cameo appearance near the end of the movie, as a passenger standing in the railway station.

“Runaway Bride” is a 1999 film starring Julia Roberts in the title role, and Richard Gere as the male romantic lead. I regard this one as a very watchable romantic comedy …

29 They can be dangerous when split : ATOMS

35 Conveyances on and off base : JEEPS

“The Invisible Man” is the classic 1933 big-screen adaptation of H. G. Wells’ sci-fi novel of the same name. The title character, Dr. Jack Griffin, is played by Claude Rains. We don’t get to see much of Rains in the movie, as he spends most of the time wrapped in bandages, and so we really only hear his voice. There’s a bit of a shooting error at the end of the film. The invisible man walks through snow, and we get to see the footprints he leaves. But, those footprints are shoe prints, and not the tracks of naked feet. Invisible shoes …?

44 Dutch master who painted “Girl Reading a Letter at an Open Window” : VERMEER

Johannes (also “Jan”) Vermeer was born in the city of Delft in 1632, and died there some 43 years later. The name “Vermeer” is a contraction of “van der meer”, which translates as “from the sea/lake”. I just love Vermeer’s paintings, and his wonderful use of light. A great example of such a work is his “Girl with a Pearl Earring”. If you haven’t seen it, I thoroughly recommend the 2003 movie “Girl with a Pearl Earring” starring Scarlett Johansson as the girl in the painting, and Colin Firth as Vermeer. The movie is based on a novel of the same name by Tracy Chevalier, so it’s all just a great story as opposed to a documentary. The way the movie is shot really reflects the qualities of a Vermeer work of art.

5 One of the Gandhis : INDIRA

The shallot is a type of onion that is closely related to the garlic, leek and chive. I’m a big fan …

To describe something as plum is to say that it is especially desirable, e.g. a plum job, the plum choice. We’ve been using “plum” in this sense since the late 18th century, and it is probably a reference to the particularly sweet and enjoyably parts of a plum pudding.

An emir is a prince or chieftain, one most notably from the Middle East. In English, “emir” can also be written variously as “emeer, amir, ameer” (watch out for those spellings in crosswords!).

51 Builder of the Domus Aurea : NERO

Following the great fire of 64 AD in Rome, many large homes on the slopes of Palatine Hill in the center of the city were burned to the ground. The emperor Nero cleared the area completely and used the land to construct an extravagant villa called the Domus Aurea (Latin for “Golden House”).