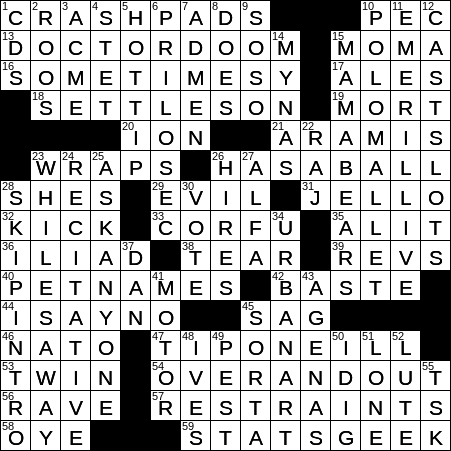 1 Impromptu places to conk out for the night : CRASHPADS

“Crashpad” is a slang term for temporary housing used by airline employees in particular. It is a place where they basically just rest and sleep, eat meals and clean up before returning to work.

Doctor Doom is a supervillain created in the Marvel Comics universe, and is an archenemy of the Fantastic Four.

Piet Mondrian was a painter from the Netherlands who also lived and worked in Paris, London and New York. Mondrian’s works ranged in style from Impressionism to Abstract.

Mort Zuckerman is a media mogul who owns the “New York Daily News” and “US News & World Report”.

20 Either constituent of table salt : ION

21 One of the Three Musketeers : ARAMIS

Alcoholic proof is a measure of the alcoholic strength of a beverage. In the US, alcoholic proof is twice the alcohol by volume (ABV), and ABV is simply the volume of alcohol in a the beverage compared to its total volume, and expressed as a percentage. Therefore a liquor that is 50% ABV, is 100 proof. The concept of “proof” dates back to the days of British sailors being paid partly with rations of rum. A “proof spirit” was the most dilute spirit that would sustain combustion of gunpowder. Simply stated, if the rum that a sailor was given was so dilute that it doused burning gunpowder, then it was unacceptable to the sailor. The person providing the rum had to give “proof” that the rum would catch light, proving it was strong enough to be used as payment. It was found experimentally that rum of 57.15% ABV was the lowest concentration that could sustain a flame, so this was named as 100 degrees proof. But nowadays we round down to 50% ABV.

Corfu is an island in the very northwest of Greece, and is located in the Ionian Sea. Corfu is a very, very popular vacation destination for European tourists, particularly those from the UK, Scandinavia and Germany.

In Greek legend, Paris was the son of the king of Troy. Paris eloped with Helen, Queen of Sparta, and this act was a major trigger for the Trojan War. Also, it was Paris who fatally wounded Achilles by shooting him in the heel with an arrow.

47 Congressman who served the most consecutive years as speaker of the House (1977-87) : TIP O’NEILL

Tip O’Neill was Speaker of the House from 1977 until he retired in 1987. He was the only Speaker to serve five complete consecutive Congresses, and the longest-serving in terms of continuous tenure. However, he was only the third longest-serving Speaker in history, after Sam Rayburn and Henry Clay, who served multiple, non-consecutive terms.

“Sabermetrics” is the name given to the statistical analysis of the sport of baseball. The term comes from the acronym SABR, standing for the Society for American Baseball Research.

1 Stack at a music store : CDS

2 They’re all over Down Under, informally : ROOS

The acme is the highest point. The term comes from the Greek word “akme” that has the same meaning.

A tout (mainly in Britain and Ireland) is someone who checks out racehorses and sells information gained to people placing bets.

“Prilosec” is a brand name for the drug omeprazole. It is a proton-pump inhibitor, meaning that is reduces the production of gastric acid.

27 Letter before Lima and after Foxtrot when spelling 27-Down : ALFA

Using the NATO alphabet, “alfa” is spelled out as “alfa – lima – foxtrot – alfa”.

34 Graffiti and such : URBAN ART

Charles Ives was one of the great classical composers, and probably the first American to be so recognized. Sadly, his work largely went unsung (pun intended!) during his lifetime, and was really only accepted into the performed repertoire after his death in 1954.