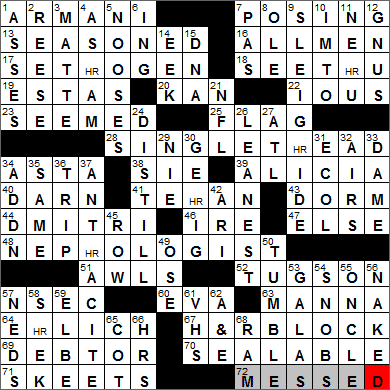 Today’s Wiki-est, Amazonian Googlies
Across
1. Suitable company? : ARMANI
Giorgio Armani is an Italian fashion designer and founder of the company that has used his name since 1975. Although Armani is famous for his menswear, the company makes everything from jewelry to perfume.

16. Those created equal, per Jefferson : ALL MEN
On 11 Jun 1776, the Continental Congress appointed a committee of five people to draft a declaration of independence. Included in the five were John Adams and Thomas Jefferson. Adams persuaded the other committee members to give Jefferson the task of writing the first draft. A resolution of independence was passed by the Congress on 2 Jul 1776. The final draft of the declaration was approved by the Congress two days later, on July 4th. John Adams wrote a letter to his wife that included an assertion that July 2nd (the date of the resolution of independence) would become a great American holiday. Of course Adams was wrong, and it was actually the date the Declaration of Independence was finalized that came to be celebrated annually.

17. Regular in Judd Apatow comedies : SETH ROGEN
Seth Rogen is a Canadian comedian who got a lot of credit for his supporting role in “The 40-Year-Old Virgin”. That led to him being cast as the lead in the 1970 film “Knocked Up”. I am afraid that I haven’t seen either movie …

Judd Apatow is best known for producing the TV series “Freaks and Geeks” and “Undeclared”. Not my cup of tea …

34. Tinseltown terrier : ASTA
Asta is the wonderful little dog in the superb movie “The Thin Man” starring William Powell and Myrna Loy (as Nick and Nora Charles). In the original story by Dashiell Hammett, Asta was a female Schnauzer, but on screen Asta was played by a wire-haired fox terrier called “Skippy”. Skippy was also the dog in “Bringing up Baby” with Cary Grant and Katharine Hepburn, the one who kept stealing the dinosaur bone. Skippy retired in 1939, so Asta was played by other dogs in the remainder of “The Thin Man” films.

39. Keys on a keyboard : ALICIA
Alicia Keys is the stage name of Alicia Cook, an R&B and soul singer from Hell’s Kitchen in New York City.

41. Home of the Azadi Tower : TEHRAN
The Azadi Tower is a magnificent gateway that marks the entrance to the city of Tehran. The tower was completed in 1971 to commemorate the 2,500th anniversary of the Persian Empire and was named the Shahyad Tower, or “King’s Memorial”. This was changed to Azadi Tower after the Iranian Revolution of 1979. “Azadi” translates into English as “freedom”.

43. Rice quarters : DORM
Rice University is a private school in Houston, Texas. William Marsh Rice had made a will endowing the funds for the establishment of the school at the time of his death. When he was found dead one morning in his bed, his lawyer announced that his will had been changed, with the bulk of Rice’s estate actually going to the lawyer making the announcement. Upon investigation, it was discovered that the lawyer had paid Rice’s valet to murder his employer using chloroform and a fake will was written. Eventually the original will was deemed valid, and the funds were disbursed so that the school could be built.

44. Composer Shostakovich : DMITRI
Dmitri Shostakovich was a Russian composer, producing works in the Soviet period. He had a difficult relationship with the Communist Party and twice was officially denounced by the party.

48. Kidney doctor : NEPHROLOGIST
Nephrology is the medical field specializing in the treatment of kidney problems. “Nephros” is the Greek word for “kidney”.

57. Tiny fraction of time: Abbr. : NSEC
“Nanosecond” is more correctly abbreviated to “ns”, and really is a tiny amount of time … one billionth of a second.

60. “Little” name in 1960s pop : EVA
Carole King and her longtime partner Gerry Goffin have been writing hit songs since the early sixties. Carole and Gerry had a babysitter, one Eva Narcissus Boyd, who was always bopping around the house in an unusual dance style. They wrote a song about her dance and they called it “The Loco-Motion”. Then they gave it to the babysitter to record. Ms. Boyd chose as a stage name a character in “Uncle Tom’s Cabin” called Little Eva …

63. Divine dish : MANNA
According to the Book of Exodus, manna was a food eaten by the Israelites as they traveled out of Egypt. Manna “fell” to Earth during the night for six days a week, and was harvested in the morning before it had time to melt.

67. Subject of the Final Jeopardy! question that knocked out Ken Jennings after a record 74 wins … or a hint to this puzzle’s theme : H&R BLOCK
The tax preparation company called H&R Block was founded in 1955 In Kansas City by two brothers, Henry and Richard Bloch. The Bloch brothers changed the spelling of their family name to “Block” for the company moniker, in order to avoid mispronunciation.

Down
2. Teammate of Robinson of the 1940s-’50s Dodgers : REESE
Pee Wee Reese met Jackie Robinson after Robinson was signed to the Brooklyn Dodgers in 1947. As Reese tells the story, when he greeted Robinson it was the first time he had shaken hands with a black man. In those early days life was difficult for Robinson, and Reese made himself very visible as a friend, supporting the breaking down of racial barriers despite very vocal opposition.

4. Religious retreat : ASHRAM
“Ashram” is a Hindu term that traditionally describes a place of spiritual retreat, one that is typically located in a remote location conducive to spiritual instruction and meditation.

6. Gerund’s end : -ING
A gerund is a form of a verb that can be used as a noun. For example, the gerund of the verb “to act” is “acting”, as in the phrase “we really enjoyed the acting”.

11. Prime minister who gave his name to an article of clothing : NEHRU
Jawaharlal Nehru was the very first prime minister of India, serving from 1947-64. Nehru was basically the heir to his mentor, Mahatma Gandhi. Nehru’s only daughter, Indira, also became prime minister (known as Indira Gandhi, though she was no relation to Mahatma).

A Nehru jacket is very like a regular suit jacket, except that the collar buttons at the neck. It was originally created in the 1940s in India, and then marketed as the Nehru jacket in the west in the sixties. The name Nehru was lifted from Jawaharlal Nehru, the prime minister of India from 1947 to 1964.

12. Lion prey : GNUS
A gnu is also known as a wildebeest, an antelope native to Africa. “Wildebeest” is actually the Dutch word for “wild beast”.

15. Test subj. : DNA
I’ve always been fascinated by the fact that the DNA of living things is so very similar across different species. Human DNA is almost exactly the same for every individual (to the degree of 99.9%). However, those small differences are sufficient to distinguish one individual from another, and to determine whether or not individuals are close family relations.

21. Texans are part of it, for short : NFL
The Houston Texans football team has been in the NFL since 2002. Houston had been home to the Oilers football team, but that franchise moved to Nashville in 1997 to become the Tennessee Titans.

29. Never, to Nietzsche : NIE
Friedrich Nietzsche was a German philosopher. Not my cup of tea …

30. Baseball’s Iron Horse : GEHRIG
Lou Gehrig was known as a powerhouse. He was a big hitter and just kept on playing. He broke the record for the most consecutive number of games played, and he stills holds the record for the most career grand slams. His durability earned him the nickname “The Iron Horse”. Sadly, he died in 1941 at 37-years-old suffering from amyotrophic lateral sclerosis (ALS), an illness we now call “Lou Gehrig’s Disease”.

33. Julie Andrews, for one : DAME
The actress and singer Julie Andrews was made a Dame in 2000 by Queen Elizabeth II. The most famous roles played by Andrews were probably the leads in “Mary Poppins” (1964) and “The Sound of Music” (1965). More recently she has had a recurring role in “The Princess Diaries” (2001) and the film’s 2004 sequel.

42. N.L. West team : ARI
The Arizona Diamondbacks joined Major League Baseball’s National League in 1998. By winning the World Series in 2001, the Diamondbacks became the fastest expansion team to do so in Major League history.

54. Ones who may annoy hoi polloi : SNOBS
“Hoi polloi” is a Greek term, literally meaning “the majority, the many”. In English it has come to mean “the masses” and is often used in a derogatory sense.

57. Flanders and Kelly : NEDS
Ned Flanders lives next door to Homer on TV’s “The Simpsons”. Ned is voiced by actor Harry Shearer and has been around since the very first episode aired in 1989.

Ned Kelly was an Irish-Australian outlaw, regarded by many as a symbol of resistance against the British ruling class in Australia in the 19th century. There have been two famous films made of his life story. “The Story of the Kelly Gang” was released in 1906, and is recognized today as the first feature film ever made. We might be more familiar with the film called “Ned Kelly” released in 1970, as it starred Mick Jagger in the title role.

58. William Steig book on which a hit 2001 film was based : SHREK
Before “Shrek” was a successful movie franchise and Broadway musical, it was a children’s picture book called “Shrek!” authored and illustrated by William Steig. The title “Shrek!” came from the German/Yiddish word Schreck, meaning “fear” or “terror”.

59. North Sea feeder : ELBE
The River Elbe rises in the Czech Republic and travels over a thousand kilometers before emptying into the North Sea where it feeds the port of Hamburg.

61. Kind of tape : VHS
The video standard known as VHS is more fully referred to as the Video Home System. VHS was one of many standards touted by various manufacturers in the seventies. The biggest rival to VHS was of course Betamax, but we all knew which of the two standards won the final round in that fight.

62. Big source of reality TV : A&E
The A&E television network used to be a favorite of mine, with the “A&E” standing for “arts and entertainment”. A&E started out airing a lot of the old classic dramas, as well as biographies and arts programs. Now there seems to be more reality TV, with one of the flagship programs being “Dog the Bounty Hunter”. A slight change of direction I’d say …