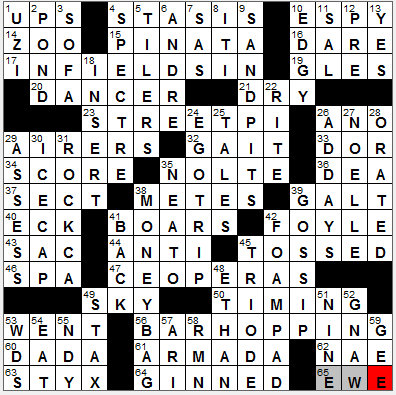 CROSSWORD SETTER: David J. Kahn
THEME: WENT BAR HOPPING … there are a number of “bars” of three squares in the grid. The themed answers “hop” over these bars:

17A. Some ballpark hits : INFIELD SIN–GLES
23. Provider of some outdoor entertainment : STREET PI–ANO
46A. “Star Wars” and “Battlestar Galactica” : SPA–CE OPERAS
53A. Painted the town red, in a way … or successfully completed this puzzle? : WENT — BAR HOPPING
11A. Youthful time : SAL–AD DAYS
31A. Sugar in large crystals : ROCK CA–NDY


Today’s Wiki-est, Amazonian Googlies
Across
10. Award named after a TV network : ESPY
The ESPY Awards are a creation of the ESPN sports television network. One difference with similarly named awards in the entertainment industry is that ESPY winners are chosen solely based on viewer votes.

15. One hanging around a party? : PINATA
Today piñatas are usually made from cardboard, brightly decorated with papier-mâché. Piñatas originated in Mexico, probably among the Aztecs or Mayans. Traditionally a piñata was made out of a clay pot adorned with feathers and ribbons, and filled with small treasures. During religious ceremonies the clay pots would be suspended and broken open so that the contents would spill onto the ground at the feet of a god as an offering.

23. Provider of some outdoor entertainment : STREET PI–ANO
A street piano is, quite simply, a piano that has been placed in the street so that people passing by can play it. The idea started in Sheffield in Yorkshire, England (where I went to school!). Someone left a piano outside his house temporarily while he waited on a friend to help him get it up some steps. He put a note on the piano inviting passers by to play the piano for free, and it was such a hit that he left it there. There are now street pianos in cities all over the world.

32. John Wayne had a distinctive one : GAIT
Apparently John Wayne developed his characteristic walk very deliberately. When he first saw himself on screen he didn’t like his natural gait, so he changed it!

33. Palme ___ (film award) : D’OR
The “Palme d’Or” (or “Golden Palm” in English) is the highest award given at the Cannes Film Festival. It goes to the director of the film selected as the best shown at the festival that year. The palm was selected as an emblem for the award as there is a palm featured on the coat of arms of the Commune of Cannes.

35. Nick name? : NOLTE
Nick Nolte’s first big film was playing opposite Jacqueline Bisset and Robert Shaw in “The Deep”, released in 1976. Prior to that he had worked as a model, and in fact appeared in a magazine advertisement for Clairol in 1972 alongside fellow model, Sigourney Weaver.

36. Traffic cop’s org.? : DEA
The Drug Enforcement Administration was set up in 1973 under the Nixon administration.

39. “Hair” composer MacDermot : GALT
Galt McDermot is a Canadian composer and pianist. His most famous work is the music for the hit show “Hair”.

40. Theologian Johann : ECK
During the Protestant Reformation in the 16th and 17th centuries, as Martin Luther was attacking the policies of the Catholic Church, Johann Eck was one of the leading defenders of Catholicism. The two had public debates, with Luther generally coming out ahead.

42. “Kitty ___” (1940 movie romance) : FOYLE
“Kitty Foyle” is a film from 1940 that stars the delightful Ginger Rogers in the title role. Prior to Rogers being cast, Katherine Hepburn had been offered the part, but she turned it down.

53. Painted the town red, in a way … or successfully completed this puzzle? : WENT — BAR HOPPING
It’s possible that the phrase “paint the town red”, meaning to go on a raucous spree, actually dates back to a particular event. It is well documented that in 1837, the Marquis of Waterford and a group of friends went wild one day in the town of Melton Mowbray in Leicestershire, England. They actually painted a whole load of the town’s buildings red. Which came first though, the incident or the idiom? Well, that is the question …

61. Naval group : ARMADA
The most famous Armada was the Spanish fleet that sailed against England in order to overthrow Queen Elizabeth I in 1588. It failed in its mission, partly due to bad weather encountered en route. Ironically, the English mounted a similar naval attack against Spain the following year, and it failed as well.

63. Boundary of myth : STYX
The River Styx in Greek mythology was the river that formed the boundary between the Earth and the Underworld (or Hades). The souls of the newly dead had to cross the River Styx in a ferryboat piloted by Charon. Traditionally, a coin would be placed in the mouths of the dead “to pay the ferryman”.

1. Shooter named for its inventor : UZI
The first Uzi sub-machine gun was designed in the late 1940s, by Major Uziel Gal, who gave his name to the gun.

4. Ghost of Jacob Marley? : SPECTRE
Jacob Marley is a character appearing in the wonderful novel by Charles Dickens, “A Christmas Carol”. Marley was the deceased business partner of Ebenezer Scrooge, and appears to Scrooge as a ghost.

6. French Literature Nobelist Gide : ANDRE
André Gide was a French author, and a winner of the Nobel Prize for literature in 1947.

The acronym KLM stands for “Koninklijke Luchtvaart Maatschappij”, which translates from Dutch as “Royal Aviation Company”. KLM is the flag carrier for the Netherlands, and is the oldest airline in the world still operating with its original name. It was founded in 1919.

11. Youthful time : SAL–AD DAYS
One’s “salad days” are the days of our youth, days of carefree exuberance and idealism. The expression originated in William Shakespeare’s “Antony and Cleopatra” as Cleopatra refers to her youthful indiscretions saying:

“…My salad days, / When I was green in judgment, cold in blood…”

18. Use a “caret and stick” approach on? : INSERT
The character known as a caret was originally a proofreading mark, used to indicate where a punctuation mark was to be inserted. “Caret” is Latin for “it lacks”.

28. Gave a keynote, say : ORATED
The “keynote” is the lowest note in a musical scale, as one might imagine. The term started to be used to mean a leading idea in the late 1700s, and the expression “keynote address” dates back to 1905.

31. Sugar in large crystals : ROCK CA–NDY
Rock candy is made up of extra large crystals of sugar. It is made by growing sugar crystals in a supersaturated solution of sugar and water, just like we all did in science class at school, remember?

39. TMZ fodder : GOSSIP
TMZ.com is a celebrity gossip web site launched in 2005. “TMZ” stands for “thirty-mile zone”, a reference to the “studio zone” in Los Angeles. The studio zone is circular in shape with a 30-mile radius centered on the intersection of West Beverly Boulevard and North La Cienega Boulevard.

45. Old vacuum tube : TRIODE
A triode is like a diode, in that it had a cathode from which electrons flow to an anode. However, there is a third terminal called a grid, between the cathode and anode. By applying a potential to the grid, the flow of electrons can be regulated.

48. Allen in history : ETHAN
Ethan Allen was one of the founders of the state of Vermont. He was also a hero in the American Revolutionary War, famous for leading (along with Benedict Arnold) the small band of men that captured Fort Ticonderoga. And yes, the Ethan Allan store and furniture line is named for Ethan Allen the patriot.

49. Record label for Otis Redding : STAX
Otis Redding is often referred to as the “King of Soul”, and what a voice he had. Like so many of the greats in the world of popular music it seems, Redding was killed in a plane crash, in 1967 when he was just 26 years old. Just three days earlier he had recorded what was to be his biggest hit, “(Sittin’ On) The Dock of the Bay”.

51. Musical with the song “Be Italian” : NINE
The musical “Nine” is based on the Federico Fellini movie “8½”. I guess we “rounded up” for the stage show …

57. 2001 World Series winner, on scoreboards : ARI
The Arizona Diamondbacks joined Major League Baseball’s National League in 1998. By winning the World Series in 2001 they became the fastest expansion team to do so in Major League history.

58. “Beyond Peace” author’s monogram : RMN
“Beyond Peace” is a book written by President Richard Nixon after he left office. The message from the book was that US needed to be more competitive in a world that was changing after the collapse of the Soviet Union and the Communist bloc.