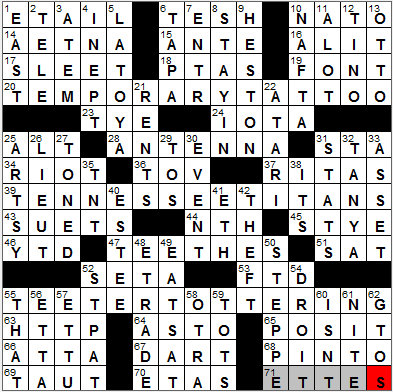 CROSSWORD SETTER: Paul Guttormsson
THEME: All the Ts … the grid is replete with the letter T, and in fact it shows up 51 times. And on top of that, every clue starts with the letter T!
COMPLETION TIME: 12m 13s
ANSWERS I MISSED: 0


Today’s Wiki-est, Amazonian Googlies
Across
1. Transact business on the Internet : ETAIL
“Etail” is the term used these days for online shopping. It is often compared to regular shopping in the “real world”, by juxtaposing it with a “brick and mortar” store.

6. TV/radio host John : TESH
John Tesh is a pianist and composer, as well as a radio and television presenter.

NATO is the North Atlantic Treaty Organization (or OTAN in French, “l’Organisation du Traité de l’Atlantique Nord”). NATO was founded not long after WWII, in 1949, and is headquartered in Brussels, Belgium. The first NATO Secretary General was Lord Ismay, Winston Churchill’s chief military assistant during WWII. Famously he said the goal of NATO was “to keep the Russians out, the Americans in, and the Germans down.”

14. Travelers alternative : AETNA
When Aetna was founded, the name was chosen to evoke images of Mt. Etna, the European volcano.

Travelers is the largest American insurance company, with revenues of over $25 billion in 2010 and assets of over $100 billion. The red umbrella logo first appeared in 1870 in a newspaper ad for Travelers just a few years after it was founded. The umbrella was resurrected in the sixties and adopted as the company’s emblem.

17. Tricky driving condition : SLEET
Sleet is a term used to describe two weather conditions. One is a shower of ice pellets, smaller than hail, and the second is a mixture of rain and snow, with the snow melting as it falls. It’s the second definition that I have always used …

20. Traditional use for henna : TEMPORARY TATTOO
Henna has been used for centuries as a dye, not just for leather and wool, but also for the hair and skin. In modern days, henna is used for temporary tattoos.

23. Tackle-to-mast rope on a ship : TYE
A tye can be either a chain or a rope, and is used to hoist a spar up a mast.

24. Tiny bit : IOTA
Iota is the ninth letter in the Greek alphabet. We use it to portray something very small, as it is the smallest of all Greek letters.

37. The Beatles’ meter maid and others : RITAS
“Lovely Rita” is a Beatles song on the “Sgt. Pepper’s Lonely Hearts Club Band” album. When the album was released in 1967, the term “meter maid” wasn’t used in the UK, although it was a slang term used in the US. The song helped spread the usage of “meter maid” all around the English-speaking world. Apparently the inspiration for the song was McCartney getting a parking ticket one day outside the Abbey Road Studios. He accepted the ticket with good grace, from a warden named Meta Davis. McCartney felt that Meta “looked like a Rita”, so that was the name she was given in the song.

39. Team in the A.F.C. South : TENNESSEE TITANS
The Tennessee Titans are a football team based in Nashville. The team relocated to Nashville from Houston in 1997 and was called the Tennessee Oilers for two seasons, before switching to the “Titans”.

43. Tallow sources : SUETS
Fat, when extracted from the carcass of an animal, is called “suet”. Untreated suet decomposes at room temperature quite easily, so it has to be “rendered” or purified to make it stable. Rendered fat from pigs is what we call “lard”. Rendered beef or mutton fat is known as “tallow”.

53. Teleflora competitor : FTD
Back in 1910, fifteen florists from around America agreed to fulfill each other’s orders using the telegraph system, setting up what they called the Florists’ Telegraph Delivery. The concept grew so large that in 1965 the group started to offer international service, and changed its name to Florists’ Transworld Delivery.

66. The U.N.’s Kofi ___ Annan : ATTA
Kofi Annan is the diplomat from Ghana who served as General Secretary of the UN for ten years until the beginning of 2007. Annan attended the MIT Sloan School of Management from 1971-72, and graduated with a Master of Science degree.

68. Two-color horse : PINTO
A “pinto” is a horse with patchy markings of white mixed with another color. “Pinto” means “painted” in American Spanish.

5. Tito Jackson’s sister : LA TOYA
Tito Jackson was the third oldest of the Jackson children, and was known in Motown as the “quiet Jackson”.

La Toya Jackson was very close to her brother Michael, both in age and temperament. It seems to me that La Toya’s obsession with the plastic surgeon’s knife was second only to that of her younger brother.

6. Toledo tidbit : TAPA
“Tapa” is the Spanish word for “lid”, and there is no clear rationale for why this word came to be used for an appetizer.

7. Theater’s ___’acte : ENTR
The term entr’acte comes to us from French, and is the interval between two acts (“entre” deux “actes”) of a theatrical performance. It often describes some entertainment provided during that interval.

9. “The Ten Commandments” star : HESTON
As well as having a fine career as an actor, Charlton Heston was a noted political activist. In the fifties he was very much a progressive and left-leaning in his political views. He was one of few in Hollywood to speak out against racism and support the Civil Rights Movement. Later in his life Heston became more associated with the conservative right, and was president of the National Rifle Association.

10. Three-country agreement of ’94 : NAFTA
The North American Free Trade Agreement (NAFTA) is between Canada, Mexico and the United States. When it came into force in 1994 it set up the largest free trade zone in the world (in terms of Gross Domestic Product).

12. Two-time All-Star Martinez : TINO
Tino Martinez has retired from Major League Baseball, but played first base for a number of teams including the Mariners, Yankees, Cardinals and Devil Rays. Martinez was born and raised in Tampa, Florida, and worked as a boy in his father’s cigar factory.

13. “The Touch of Your Hand” lyricist Harbach : OTTO
Otto Harbach was a very successful librettist and lyricist. He was responsible for the words of many celebrated songs including “Smoke Gets in Your Eyes” and “Indian Love Call”.

22. Tempest game maker : ATARI
At one point Atari was the fastest growing company in US history, but it never really recovered from the video game crash of 1983.

26. Title for Sulu on “Star Trek”: Abbr. : LIEUT
Mr. Sulu was of course played by George Takei in the original “Star Trek” series. Takei has played lots of roles over the years, and is still very active in television. Did you know that he appeared in the 1963 film, “Pt-109”? Not only did Takei play the helmsman on the Starship Enterprise, he played the helmsman steering the Japanese destroyer that ran down John F. Kennedy’s motor torpedo boat.

32. Tucker with the #1 country hit “Here’s Some Love” : TANYA
Country singer Tanya Tucker’s first hit was “Delta Dawn” in 1972, which she recorded at only 13 years of age.

35. “The Closer” airer : TNT
“The Closer” is a crime drama aired on TNT, with Kyra Sedgwick in the lead role. Sedgwick is married to actor Kevin Bacon.

38. T.G.I.F. part : IT’S
“Thank God It’s Friday” is a relatively new expression, originating in Akron, Ohio. It was a catchphrase used by disk jockey Jerry Healy of WAKR in the early seventies.

40. “Terminal Bliss” actress Chandler : ESTEE
Estee Chandler is an American actress. She made appearances on “Star Trek: The Next Generation” and “Who’s the Boss?”. I believe she also used to date comedian Adam Carolla.

42. Thug’s crime, often : THEFT
There used to be a band of of murderers and robbers in India, famous for their use of the weapon called a garrote. These felons were known locally as “thuggees” (from the Hindi word for “thief”). This gave us our contemporary word “thug”, meaning a brute.

48. TD Waterhouse online competitor : E*TRADE
E*Trade is mainly an online discount brokerage. It was founded in 1982 in Palo Alto, California, and I used to drive by its headquarters almost every day. The company is now run out of New York City. E*Trade produces those famous Super Bowl ads with the talking babies staring into a web-cam.

50. Treeless tract : STEPPE
A steppe is a grassland, devoid of trees apart from those growing near rivers and lakes. In this country we would likely call such a geographic feature a prairie.

52. Time-honored Irish cleric, for short : ST PAT
There is a fair amount known about St. Patrick, some of which comes from two letters written in his own hand. He lived in the fifth century, but was not born in Ireland. He was first brought to Ireland at about 16 years of age from his native Britain, by Irish raiders who made him a slave for six years. He managed to escape and return home where he studied and entered the Church. He returned to Ireland as a bishop and a missionary and there lived out the rest of his life. There seems to be good evidence that he died on March 17th, although the year is less clear. The stories about shamrock and snakes, I am afraid they are the stuff of legend.

56. “Tell Mama” singer James : ETTA
Etta James is best known for her beautiful rendition of the song “At Last”. Sadly, as she discloses in her autobiography, James has lived a life that has been ravaged by drug addiction, leading to numerous legal and health problems.

57. Traitor’s rebuke : ET TU
It was Shakespeare who used the words “Et tu, Brute?” (And you, Brutus?), in his play “Julius Caesar” although the phrase was around long before he penned his drama. It’s not known what Julius Caesar actually said just before he was assassinated on the steps of the Senate in Rome.

59. Tykes : TOTS
“Tyke” has been used playfully to describe a young child since at least 1902, but for centuries before that a tyke was a cur or mongrel, or perhaps a lazy or lower-class man.

61. TV’s Nick at ___ : NITE
Nick at Nite is the name given to the late night programming aired on the Nickelodeon channel space. Nick at Nite started broadcasting in 1985 and was conceived as television’s first “oldies” television network.