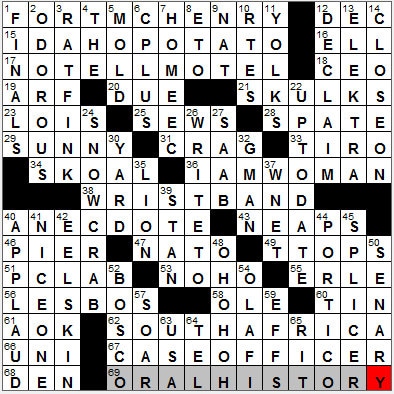 
Today’s Wiki-est, Amazonian Googlies
Across
1. Historic U.S. place in the shape of a five-pointed star : FORT MCHENRY
Fort McHenry sits on a peninsula in the opening to Baltimore Harbor in Maryland. The fort saw action in the War of 1812 as US forces were successful there in defending an attack by the British Navy. Francis Scott Key was watching the bombardment of Fort McHenry when he was inspired to write the words to “The Star Spangled Banner”.

12. Present time?: Abbr. : DEC
December, and Christmas in particular, is the time for presents.

15. Russet Burbank, e.g. : IDAHO POTATO
Potatoes were planted in Idaho as early as 1838. Thank goodness! What we do without potatoes …?

23. Newbery Medal-winning author Lowry : LOIS
Lois Lowry is a writer of children’s fiction. Lowry doesn’t stick to “safe” material in her books, and has dealt with difficult subjects such as racism, murder and the Holocaust. Two of her books won the Newbery Medal: “Number the Stars” (1990) and “The Giver” (1993).

33. Cicero’s servant and secretary : TIRO
Marcus Tullius Tiro was a slave in the Cicero household in Rome. In Cicero’s writings he refers to Tiro quite often, as he performed the services of a personal assistant. Perhaps as a reward for the quality of his work, Cicero freed Tiro, but the former slave chose to continue working with his master. It is thought that Tiro gathered together and published Cicero’s work after he died. Tiro himself apparently died a free man in 4 BCE, at the ripe old age of 99 years.

34. Red Man rival : SKOAL
Skoal is the most popular brand of dipping tobacco in the country. Red Man also produces a dipping tobacco, but mainly sells the chewing variety.

36. First #1 Billboard hit by an Australian artist (1972) : I AM WOMAN
The successful singer Helen Reddy was born in Melbourne, Australia. In 1966, Reddy won a talent contest, and earned herself a trip to New York City for an audition. The 25-year-old single mother decided to stay in the US, and a few years later was able to launch a successful singing career. Her hit song “I Am Woman”, released in 1972, was the first recording by an Australian artist to reach #1 in the US charts.

47. Strike authorizer : NATO
NATO is the North Atlantic Treaty Organization (or OTAN in French, “l’Organisation du Traité de l’Atlantique Nord”). NATO was founded not long after WWII, in 1949, and is headquartered in Brussels, Belgium. The first NATO Secretary General was Lord Ismay, Winston Churchill’s chief military assistant during WWII. Famously he said the goal of NATO was “to keep the Russians out, the Americans in, and the Germans down.”

49. Camaro options : T-TOPS
A T-top is a car roof that has removable panels on either side of a rigid bar that runs down the center of the car above the driver.

51. Campus home for mice : PC LAB
The first computer mouse was invented at the Stanford Research Institute in 1963, by one Douglas Englebert. Sadly for him, his patent ran out before mice became standard equipment on computers, so he never made any money out of his amazing invention.

53. Area near Manhattan’s Union Square : NOHO
NoHo is short for North of Houston (street), and is the equivalent area to SoHo, South of Houston. Both NoHo and SoHo are neighborhoods in New York City.

55. First name in mysteries : ERLE
I must have read all of the Perry Mason books when I was in college. I think they kept me sane when I was facing the pressure of finals. Author Erle Stanley Gardner was himself a lawyer, although he didn’t get into the profession the easy way. He went to law school, but got himself suspended after a month. So, he became a self-taught attorney and opened his own law office in Merced, California. Understandably, he gave up the law once his novels became successful.

56. Eponymous Greek island : LESBOS
Lesbos is an island in the northeastern Aegean Sea just off the coast of Turkey. It is the third largest of all the Greek islands.

62. Natal setting : SOUTH AFRICA
Natal was a province of South Africa up to 1994. The name “Natal” means Christmas in Portuguese, a name given to the region by the explorer Vasco da Gama as he sailed by on Christmas Day in 1497.

Down
3. Canary : RATFINK
Ratfink is a slang term used in North America for a really obnoxious person, especially someone who has “squealed, spilled the beans”.

4. With 5-Down, what iconoclasts break : THE
5. See 4-Down : MOLD
Iconoclasm is the deliberate destruction of society’s icons, either religious or cultural. The term applies more to a rebellious action from within a society, as opposed to an act by external forces invading another culture. As such, the term “iconoclast” has come to have a broader meaning, describing anyone who stands up against established convention.

9. Red rival, briefly : NAT
The Washington Nationals baseball team started out life as the Montreal Expos in 1969. The Expos moved to Washington in 2005, becoming the Nats. There are only two Major Leagues teams that have never played in a World Series. One is the Mariners, and the other the Nats.

10. GPS choices: Abbr. : RTES
GPS stands for Global Positioning System. The modern GPS system that we use today was built by the military who received the massive funding needed because of fears during the Cold War of the use of Intercontinental Ballistic Missiles. We civilians, all round the world, owe a lot to President Ronald Reagan because he directed the military to make GPS available to the public for the common good. He was moved to do so after the Soviet Union shot down KAL flight 007 carrying 269 people, when it accidentally strayed into Soviet airspace.

12. Give a passionate recital : DECLAIM
To declaim is to speak forcefully and passionately, often in a formal setting.

13. The Doors’ record label : ELEKTRA
The Doors formed in 1965 in Los Angeles. The band chose their name from a book by Aldous Huxley called “The Doors of Perception”.

24. Frequent catch on TV’s “Deadliest Catch” : SNOW CRAB
“Deadliest Catch” is yet another reality show, although this one is perhaps worth a look. It is produced for the Discovery Channel and deals with the exciting life on board fishing boats in the Bering Sea.

27. “Move your mind” sloganeer : SAAB
SAAB stands for Svenska Aeroplan AB, which translates into English as Swedish Aeroplane Limited. So yes SAAB was, and still is, mainly an aircraft manufacturer. If you take small hops in Europe you might find yourself on a SAAB passenger plane. The SAAB automobile division was acquired by General Motors in the year 2000.

32. Old pulp fiction hero : G-MAN
The nickname “G-men” is short for “Government Men”, and refers to agents of the Federal Bureau of Investigation.

37. N.Y.C.’s PBS station : WNET
WNET is a television station located in Newark, New Jersey. It is PBS’s station that covers New York City, as well as the rest of the tri-state area.

39. Persian for “place of” : STAN
The suffix “-stan” in many place names is Persian for “place of”. One example is “Pakistan”, the Place of the Pure. “Pakistan” is a relatively recent name, first coined in 1933. It comes from the acronym PAKSTAN, standing for Punjab – Afghan Province – Kashmir – Sind – BaluchisTAN, all regions in the north of India. The “I” was added to Pakistan to make it easier to pronounce, and to fit the translation “Land of the Pure”.

44. Classical Greek temple feature : PORTICO
“Portico” is an Italian word, and describes a porch or roofed walkway leading to the entrance of a building.

54. King surnamed Tryggvason : OLAF I
It is believed that the Norwegian King Olaf I led the conversion of the Vikings to Christianity and built the first church in the country (in 995 CE). Olaf was actually married to an Irishwoman, albeit a woman from a Viking family. Queen Gyda was the sister of the King of Dublin, Olaf Cuaran.

65. Slowing, in mus. : RIT
Rit. (or sometimes ritard.) is the abbreviation for ritardando, the musical direction to slow down the tempo.