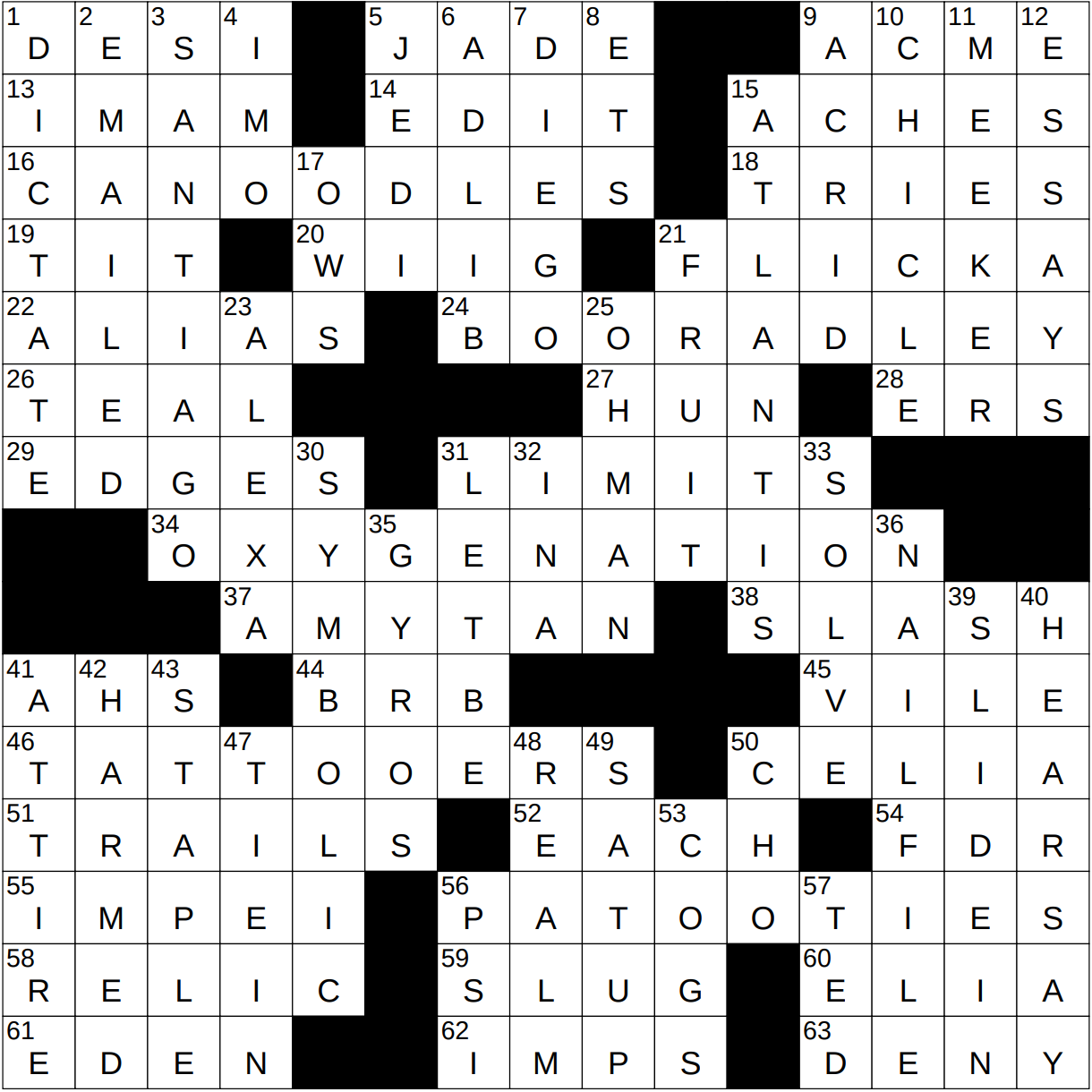 Themed answers have been OXYGENATED (had O-O inserted) to give another word:

To canoodle is to indulge in caresses and kisses.

“My Friend Flicka” is a 1943 screen adaptation of the children’s novel of the same name by Mary O’Hara. The film stars a young Roddy McDowall in the lead role. Flicka is a horse …

22 Captain Marvel, for one : ALIAS

In Harper Lee’s classic novel “To Kill a Mockingbird”, Boo Radley is the reclusive neighbor living next door to the children Jem and Scout. The kids are both afraid of, and at the same time fascinated, by Boo.

The prefix “icosa-” is most often seen in the word “icosahedron”, which describes a polyhedron with 20 faces shaped as equilateral triangles. “Icosa-” comes from the Greek “eikosi” meaning “twenty”.

54 Prez who founded the March of Dimes : FDR

President Roosevelt was a major driver in the founding of the National Foundation for Infantile Paralysis. The Foundation’s most successful fundraising campaign was to encourage the public to just send a dime to support the charity, so that even before the Foundation officially changed its name, the public were already calling it March of Dimes. After President Roosevelt passed away in office, Congress passed legislation calling for a new design for the dime, one featuring the image of FDR. The Roosevelt dime was introduced in 1946, on the day that would have been the President’s 64th birthday.

Back in the 1920s, the term “patootie” was used for a sweetheart, a very pretty girl. Somehow, the term has evolved into slang for the posterior, rear end.

3 World capital on the so-called Pacific Ring of Fire : SANTIAGO

The name “Ring of Fire” is given to the area surrounding the Pacific Ocean which is prone to large numbers of earthquakes and volcanic eruptions. In fact, 75% of the planet’s active volcanoes are found in the Ring of Fire.

The Force is a metaphysical power much cited in all of the “Star Wars” movies. We may even hear someone in real life say “May the Force be with you”. Fans of the movie franchise even celebrate May 4th every year as Star Wars Day, using the pun “May the 4th be with you”!’

Diego Maradona had to have been the most famous of Argentina’s soccer players. He was also one of the country’s most controversial sportsmen and was noted for his outspoken manner with journalists, as well as his cocaine addiction.

Chicle is a natural gum or latex that can be extracted from the Manilkara chicle tree that is native to Mexico and Central America. Companies like Wrigley were major users of chicle prior to the sixties as the product was used as the base ingredient in chewing gum. Today chewing gum manufacturers generally use a synthetic rubber that is cheap to manufacture as a replacement for natural chicle. I am so happy I don’t chew gum!

15 Where Aquaman reigns as king : ATLANTIS

40 Grist for the rumor mill : HEARSAY

Hearsay is information that one person has about some event, without that person actually seeing the event firsthand. For example, I am typing up this blog on my laptop, so now you can tell others that I typed this blog on my laptop. However, if you do tell that to others, it is hearsay, because you didn’t actually see me do the typing. Maybe I lied … maybe I used my desktop!

When grain has been separated from its chaff, to prepare it for grinding, it is called “grist”. Indeed, the word “grist” is derived from the word “grind”. Grist can be ground into a relatively coarse meal, or into a fine flour. The names can be confusing though. For example, the grist from maize when ground to a coarse consistency is called “grits”, and when ground to a fine consistency is called “corn meal”. There is an idiomatic phrase “grist for one’s mill”, meaning something used to one’s advantage. The grinding mechanism, or the building that holds the mechanism, is known as a “gristmill”.

The McDonald’s Happy Meal was introduced in 1977. It was inspired by a selection of food in a Guatemalan McDonald’s designed to suit children that was called “Menu Ronald”. The toys in Happy Meals often tie-in with some movie, and so are part of an advertising campaign.