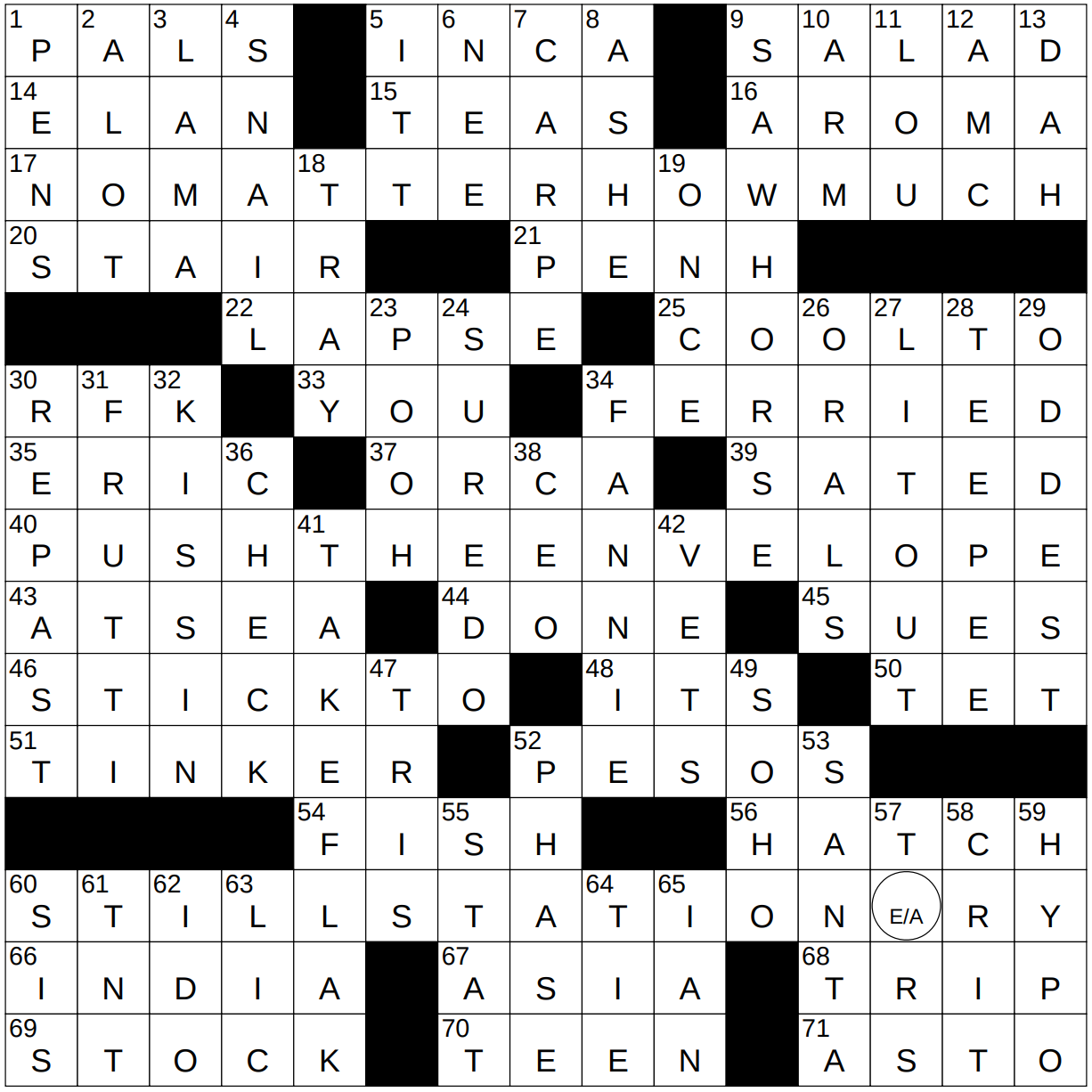 Constructed by: Rob Baker
Edited by: Will Shortz

Themed answers give us a quip, one that ends with both STATIONARY and STATIONERY. And so, there’s a clever rebus square at the end of the quip:

The Inca Empire was known as the Tawantinsuyu, which translates as “land of the four quarters”. It was a federal organization with a central government that sat above four “suyu” or “quarters”, four administrative regions.

Phnom Penh (also “Pnom Penh”) is the capital of Cambodia, and has been so since the French colonized the country in the late 1800s. The city’s name translates from the Khmer language as “Hill of Penh”.

Robert “Bobby” Francis Kennedy (RFK) was the US Attorney General (AG) in the administration of his brother President John F. Kennedy and President Lyndon B. Johnson from 1961 to 1964. He then served as a US Senator for the State of New York from 1965 until 1968, when he was assassinated. Bobby was killed during his own run for the Democratic nomination for the presidency.

Squids are cephalopods with large eyes, two tentacles and eight arms. They can move very rapidly through the water, using jet propulsion. Very commonly, squid is served as a food under the name “calamari”.

60 End of the quip : … STILL STATIONARY/STATIONERY

66 Where shampoo was invented : INDIA

Agatha Christie (née Miller) was the best-selling novelist of all time, having sold about 4 billion copies worldwide in total. The only books to have sold in higher volume are the works of William Shakespeare and the Bible.

Lou Rawls was an American soul and blues singer known for his smooth vocal style. With his singing career well on the way, Rawls was asked to sing “The Star Spangled Banner” in 1977 at a Muhammad Ali fight in Madison Square Garden. This performance led to him being asked to sing the anthem many, many times in the coming years with his last rendition being at a World Series game in 2005. Rawls passed away in January of the following year.

Our word “repast”, meaning “meal”, came to us via French (in which language “repas” is “meal”). Ultimately the term comes from the Latin “repascere” meaning “to repeatedly graze”.

The adjective “tutti-frutti” describes a prepared confection that has a combination of fruit flavors. “Tutti frutti” is Italian for “all fruits”.

The Federal National Mortgage Association is commonly called “Fannie Mae”, a play on the initialism “FNMA”. Fannie Mae was founded during the Great Depression as part of President Roosevelt’s New Deal.

“Flak” was originally an acronym standing for the German term for an aircraft defense cannon (FLiegerAbwehrKanone). “Flak” then became used in English as a general term for antiaircraft fire and ultimately a term for verbal criticism, as in “to take flak”.

47 Heroine Prior of the “Divergent” series : TRIS

The area of London called Soho had a very poor reputation for most of the 20th century as it was home to the city’s red-light district. Soho went through a transformation in recent decades, and has been a very fashionable neighborhood since the 1980s.

“Elf” is a comedy movie that was released for the 2003 Christmas season. It was directed by Jon Favreau and stars Will Ferrell in the title role, with James Caan supporting and Ed Asner playing Santa Claus. It’s all about one of Santa’s elves who finds out he is human and goes to meet his father in New York City. The film was adapted into a stage musical that premiered on Broadway during the Christmas season of 2010.

Ed Asner was most famous for playing the irascible but lovable Lou Grant on “The Mary Tyler Moore Show” and on the spin-off drama “Lou Grant”. Off-screen Asner was noted for his political activism. He served two terms as president of the Screen Actors Guild (SAG), and was very involved in the 1980 SAG strike. When “Lou Grant” was canceled in 1982, despite decent ratings, there was a lot of talk that the cancellation was a move by the network against Asner personally. In fact, one of Asner’s activist colleagues, Howard Hesseman (who played Johnny Fever) found that his show “WKRP in Cincinnati” was also canceled … on the very same day.

“TNT” stands for Turner Network Television. The TNT cable channel made a big splash in the eighties when it started to broadcast old MGM movies that had been “colorized”, not something that was a big hit with the public. In recent years, the TNT programming lineup is touted with the tagline “We Know Drama”.

Ian McShane is an English actor who is famous in his homeland, and to PBS viewers in the US, for playing the title role in “Lovejoy”. In this country, he is perhaps better known for playing the conniving saloon owner on the HBO western drama “Deadwood”.