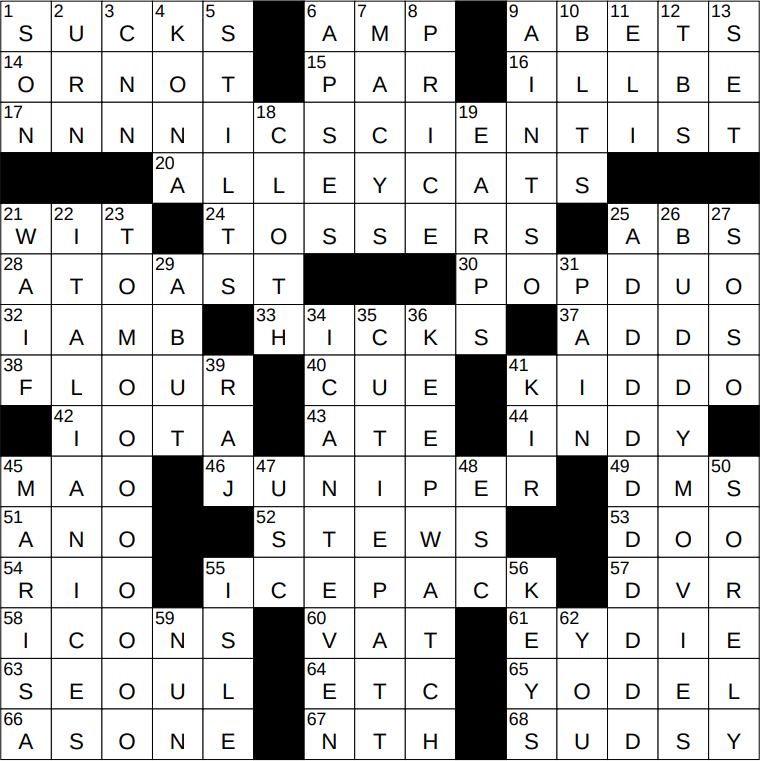 Constructed by: Parker Higgins & Ross Trudeau
Edited by: Will Shortz

Themed answers use a specific number of letters in place of syllables:

9 Provides a hideout for, maybe : ABETS

Singing duo Sonny & Cher started out in the mid-1960s as backing singers working with Phil Spector. The couple married in 1964, and the next year released their breakthrough numbers “Baby Don’t Go” and “I Got You Babe”. Sonny and Cher divorced in 1975, and dissolved their act that same year. Cher moved onto a successful solo career that continues to this day. Sonny Bono was elected as a US Congressman for California in 1995. Sadly, he didn’t finish his term in the House as he died from injuries sustained in a skiing accident in 1998.

38 One of the pounds of a pound cake : FLOUR

Basically “English” is another name for “side-spin” that is applied to a cue ball in billiards.

54 Setting for the memorable cable car scene in “Moonraker” : RIO

“Moonraker” is the third of Ian Fleming’s “James Bond” novels, and was first published in 1955. It is unique in the series in that it is the only one in which all of the action takes place entirely in Britain. The title “Moonraker” was used for the eleventh in the series of “James Bonds” movies, but the film’s plot was very different from that of the book.

Eydie Gormé is best known for her work with her husband Steve Lawrence. The duo started performing traditional popular music together in the late fifties. One of the couple’s children is David Nessim Lawrence, a composer who wrote the score for the 2006 movie “High School Musical”.

6 Features in some houses of worship : APSES

The original Macy’s store was opened by Rowland Hussey Macy in Haverhill, Massachusetts in 1851. This store, and several others that Macy opened, all failed. Macy picked himself up though, and started over again in New York City. Those early New York stores all focused on the sale of dry goods, but added departments quickly as the clientele grew. The Macy’s red star logo has been around since the company was first established. Macy chose the star because it mimicked the star tattoo that he got as a teenager when he was working on a whaling ship out of Nantucket.

“Booksmart” is a 2019 comedy film about two high school students breaking out of their relatively bookish ways just prior to graduation. The movie was actress Olivia Wilde’s directorial debut, and apparently, the critics loved this film.

47 College inits. on both the East and West Coasts : USC