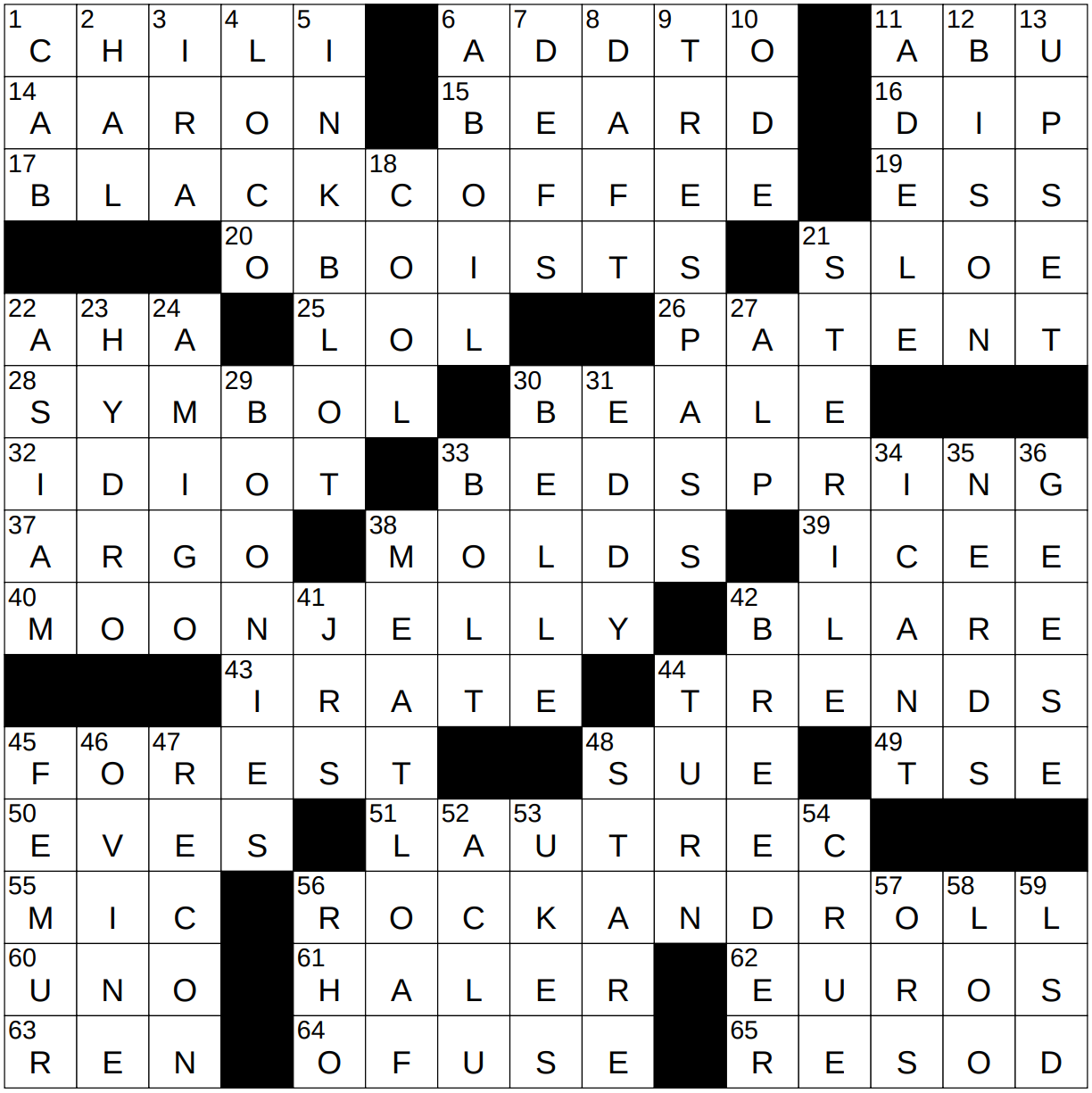 Constructed by: Robert Won
Edited by: Will Shortz

Aaron Copland was the most American of all classical composers, I think. Perhaps his most famous work is the “Fanfare for the Common Man”. The piece was written in 1942 and was intended to be uplifting in the gloomy years leading up to WWII. “Fanfare” is recognized not just for performances of the original, but also for the progressive rock version that was recorded by Emerson, Lake & Palmer in 1977.

20 They play among the reeds : OBOISTS

The moon jelly (also “common jelly”) is a type of jellyfish found in almost all of the world’s oceans. It is prey to many different predators, including sunfish and sea turtles, as well as some seabirds.

Even though Robin Hood is a character from legend, Sherwood Forest does really exist. It is located in Nottinghamshire in England, and has been around since the last ice age.

The Buffalo nickel is also called the Indian head nickel, and was minted from 1913 to 1938. The coin is so called because the obverse bears the profile of a Native American male, and the reverse an image of an American bison.

Monticello, President Thomas Jefferson’s plantation home, first appeared on US currency in 1928, when it featured on the reverse of a two-dollar bill. The image was replaced on the bill in 1966. Monticello also appears on the reverse of the 5-cent coin, starting in 1938 and continuing to this day.

“Compadre” is Spanish for “friend, buddy”.

29 Outskirts of the outskirts : BOONIES

“Boondocks” (often shortened to “boonies”) is a term used in North America for a remote, usually rural area. Often the term is used derogatively, implying that a remote location is unsophisticated. “Boondocks” was first used by American soldiers stationed in the Philippines in the early 1900s. The word evolved from the Tagalog “bundok” meaning “mountain”.

36 Flappers in a gaggle : GEESE

“Meat Loaf” was the stage name of rock musician Marvin Lee Aday from Dallas, Texas. Meat Loaf’s second album is “Bat Out of Hell”, one of the best selling albums of all time. “Bat Out of Hell” still sells hundreds of thousands copies every year, and has sold over 40 million copies worldwide.

42 Operator of a stud farm : BREEDER

44 Community card between “flop” and “river” in hold’em : TURN

45 It’s connected to the tibia : FEMUR