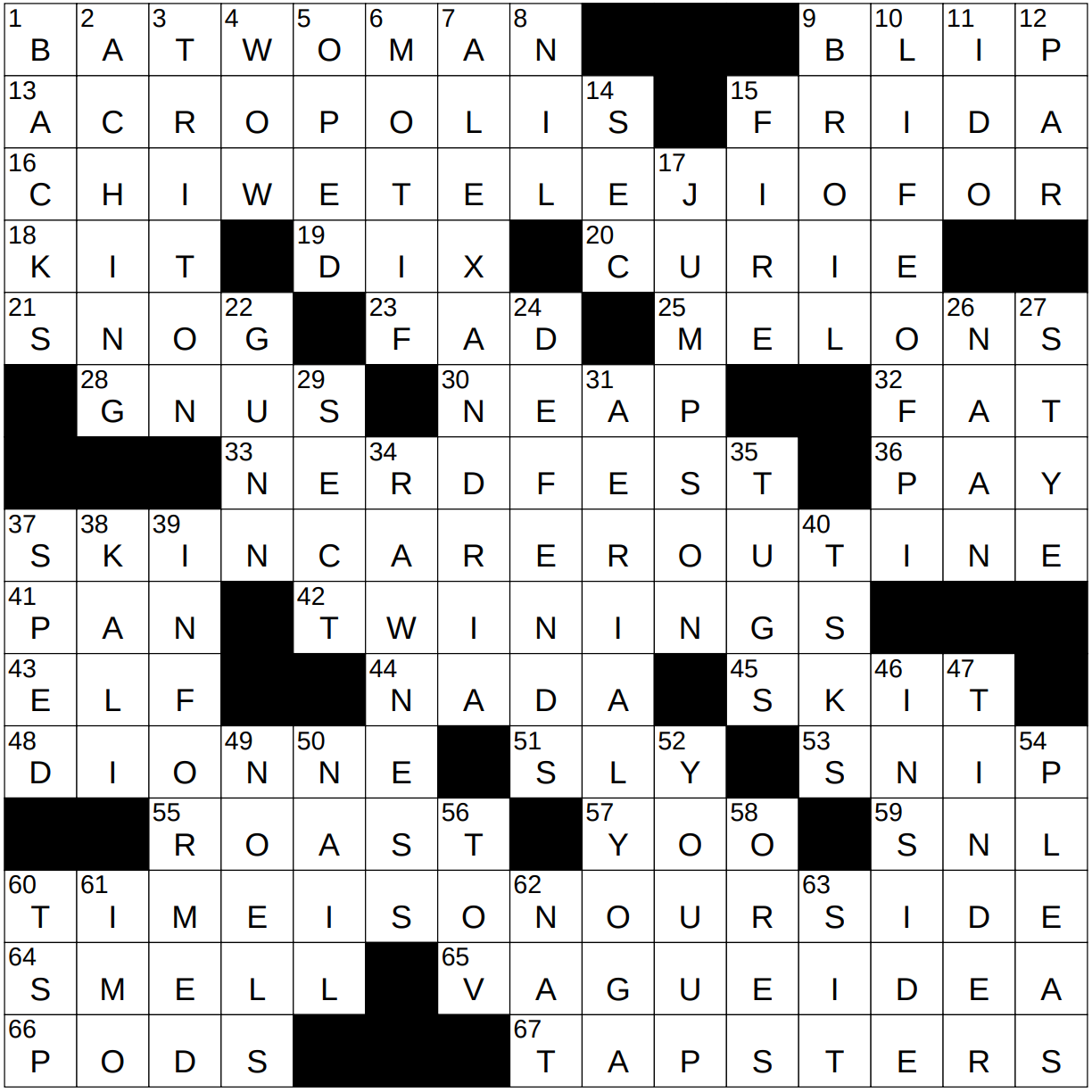 Dorothea Dix was a social activist who lobbied on behalf of the mentally ill, especially those without means. Dix was the driving force behind the construction of the first mental asylums in the US.

20 Only person to win a Nobel Prize in two scientific fields : CURIE

28 Prey for some hyenas : GNUS

A brownie is an elfin figure in Scottish and English folklore. Brownies are purported to live in houses, helping with work around the house, but only at night when they can’t be seen. Believers might leave small items of food for the brownies, to encourage them to help out.

Dionne Warwick is a very, very successful singer, one with more Top 100 hits than any female vocalist other than Aretha Franklin. Warwick had a pretty successful cousin who was a singer as well … named Whitney Houston.

Studio 8H is an NBC TV studio located at 30 Rockefeller Plaza in New York City. When completed in 1933, it was the largest radio studio in the world, and was intended for orchestral performances as well as variety programs with large studio audiences. Studio 8H was converted for television in 1950, and since 1975 has been the home of “Saturday Night Live” (SNL).

Triton was a Greek god, the messenger of the sea. He was usually depicted as “merman”, with the body of a man and the tail of a fish. Triton carried a trident, like his father Poseidon, and a twisted conch shell that he used as trumpet. By blowing in the conch shell he could calm or raise the waves.

6 Prophecy or hallucinations, in “Macbeth” : MOTIF

7 City with a famous library : ALEXANDRIA

10 Best-selling novel that begins in Pondicherry, India : LIFE OF PI

31 Fitness activity done while suspended from a hammock : AERIAL YOGA

Our word “hammock” comes via Spanish from Haiti, and evolved from a word used to describe a fishing net.

38 Master of death, in Hinduism : KALI

58 Galena and cinnabar, for two : ORES

Cinnabar is an ore from which mercury is extracted. It is a bright red or scarlet mineral in its natural form.

61 Initialism to which an “h” is sometimes added : IMO