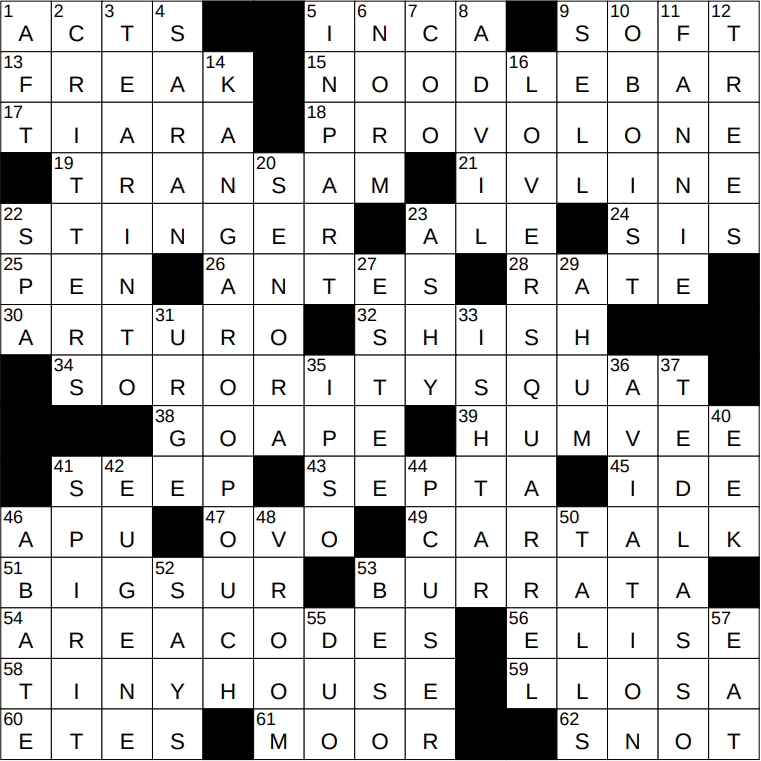 Constructed by: Sophia Maymudes & Margaret Seikel
Edited by: Will Shortz

1 Source of the quote “It is more blessed to give than to receive” : ACTS

An andén (plural “andenes”) is a set of step-like terraces dug into a hillside for growing crops. Andenes help when farming on a steep hillside by giving easier access, increasing exposure to sunlight and controlling erosion. The original andenes were built by pre-Colubian peoples in Central and South America, hence the Spanish term “andén” meaning “platform”.

When Meghan Markle married Prince Harry, she followed tradition by wearing something old, something new, something borrowed, and something blue:

The Trans Am, produced from 1969 to 2002, was a specialty version of the Pontiac Firebird. My favorite Trans Am is KITT, the artificially intelligent car in the eighties TV show “Knight Rider” …

A rush is a drive by a fraternity or sorority to recruit new members on campus.

The US slang “go ape” is actually a cleaner version of a similar expression, and is American slang that only dates back to about 1955.

Public transportation in and around Philadelphia is managed by the Southeastern Pennsylvania Transportation Authority (SEPTA).

46 “The Simpsons” character with an 18-letter last name : APU

Car Talk is a very entertaining radio show aired on NPR on weekends. The show is hosted by brothers Tom and Ray Magliozzi (aka “Click and Clack, the Tappet Brothers”). The hosts spend most of their airtime giving advice on automotive repair, and do a lot of kidding around as well. Click and Clack retired in 2012, so today’s broadcasts are repeats. Tom Magliozzi passed away in 2014.

54 Numbers that come after 1 : AREA CODES

Renée Elise Goldsberry is an actress and singer who is best known to me for playing the attorney Geneva Pine on the TV show “The Good Wife”. Goldsberry also originated the role of Angelica Schuyler Church in the hit Broadway musical “Hamilton”.

“Wuthering Heights” is the only novel written by Emily Brontë, and one that she published using the pen name Ellis Bell. It was published in December of 1847, a date chosen to take advantage of the wave of success enjoyed by Charlotte Brontë’s “Jane Eyre” that had been published just two months earlier.

14 Marsupium, by another name : KANGAROO POUCH

36 Ohio claims to be its birthplace : AVIATION

Dayton is a city in the southwest of Ohio that is famously home to Wright-Patterson Air Force Base. The city is also referred to as the “Birthplace of Aviation”, as it was in Dayton that Orville and Wilbur Wright built and improved the Wright Flyer. The Wright Flyer made the first controlled and sustained flight of a powered, heavier-than-air aircraft in 1903 in Kitty Hawk, North Carolina.

37 TV character who said “I do love a locker room. It smells like potential” : TED LASSO

“Ted Lasso” is a marvelous sports-comedy TV show about an American college football coach who moves to the UK to manage an English soccer team. The title character is played very admirably by Jason Sudeikas. Sudeikas first played Lasso in a series of TV commercials commissioned to promote NBC’s coverage of the British Premier League. Great stuff, and highly recommended …

MS-DOS (short for “Microsoft Disk Operating System”) was the main operating system used by IBM-compatible PCs in the eighties and for much of the nineties. Microsoft introduced the Windows operating environment in 1985 to sit above MS-DOS as a graphical user interface (GUI). That move was made in response to the success of Apple’s GUI released with the Lisa and Macintosh platforms. A court case ensued, one that was eventually settled in court in favor of Microsoft.

55 What Salt-N-Pepa were not, despite their name : DUO