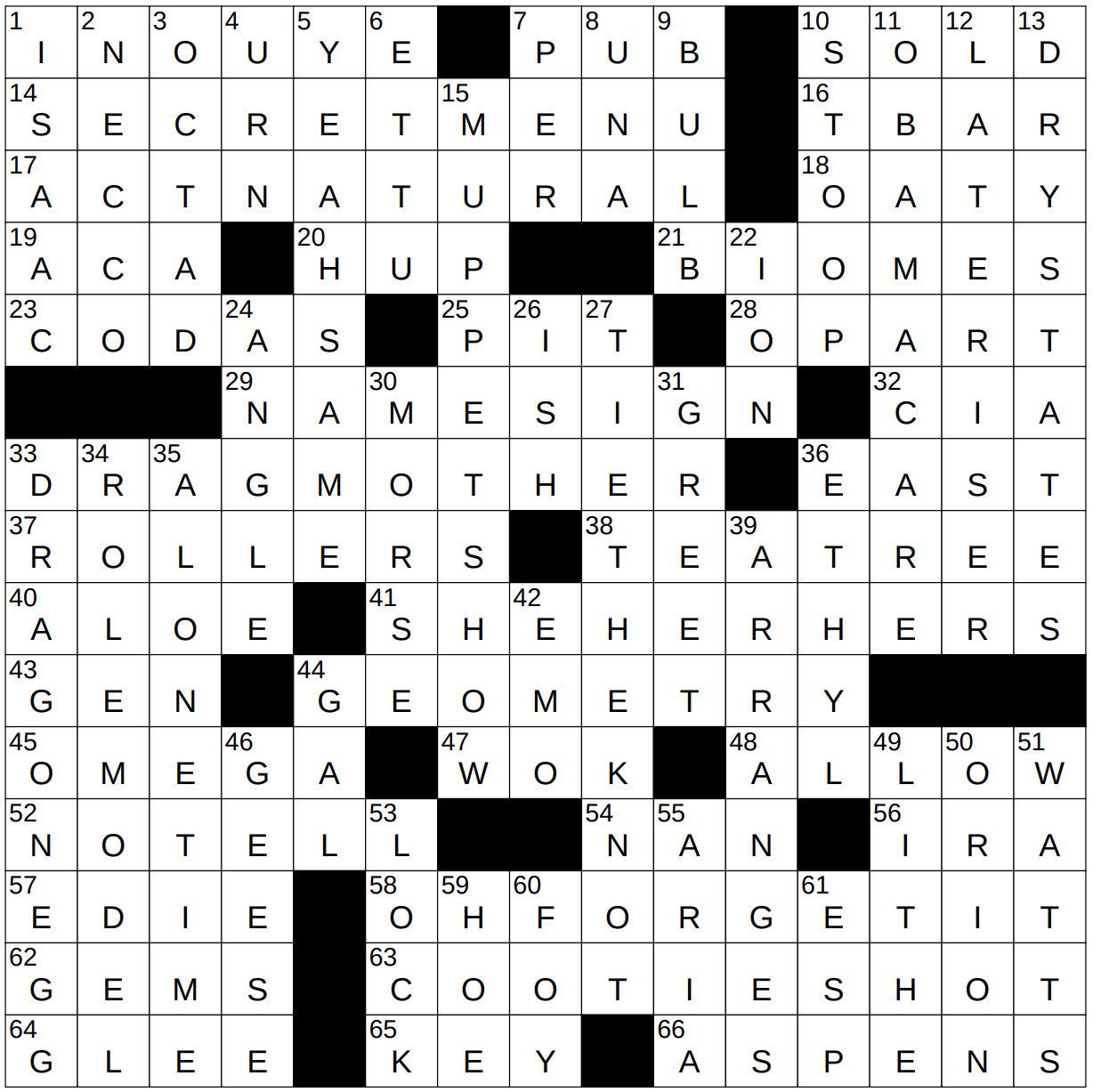 1 Senator after whom Honolulu’s airport is named : INOUYE

Senator Daniel Inouye was a US Senator for the state of Hawaii and was the President pro tem of the Senate (the US Vice President is the President of the Senate). Given this role, he was the highest-ranking Japanese-American in the country’s history as he was third in the line of succession to the office of US President. Senator Inouye passed away in 2012. Honolulu’s airport was renamed to Daniel K. Inouye International Airport in 2017 in his honor.

14 The burger chain In-N-Out has a famous one : SECRET MENU

In-N-Out Burger is a fast food chain that’s very popular out here on the left coast. Unusually for a fast food business, In-N-Out Burger has no franchises and is privately owned. The company also prides itself on paying all employees above minimum wage. Also, if you check the packaging of the food and drink items, you’ll find a bible verse discreetly printed on the bottom of cups and wrappers, reflecting the Christian beliefs held by the company ownership. In-N-Out Burger was founded in 1948 by Harry and Esther Snyder, and is now owned by Lynsi Snyder, the couple’s only grandchild.

16 Transport unlikely to operate in the summer : T-BAR

28 Museum pieces you might find to be moving? : OP ART

33 Mentor to a queen : DRAG MOTHER

44 Course you need a compass to navigate? : GEOMETRY

Our word “geometry” comes from Greek. The Greek “geometria” translates as “geometry, measurement of earth or land”. Hence, there is a link between terms like “geography” and “geology”, and the mathematical word “geometry”.

1 His burial place is said to be in Israel’s Cave of Machpelah : ISAAC

According to the Bible, Abraham’s son Isaac was born to Abraham’s wife Sarah when she was beyond her childbearing years and when Abraham was 100 years old. Isaac himself lived until he was 180 years old. When Isaac was just a youth, Abraham was tested by Yahweh (God) and told to build an altar on which he was to sacrifice his only son. At the last minute, an angel appeared and stopped Abraham, telling him to sacrifice a ram instead.

Necco Wafers were the best-known product line of the candy manufacturer called the New England Confectionery Company. The firm’s name was abbreviated to “NECCO”, an acronym that became synonymous with the wafers.

“Inspector Morse” is a series of detective novels penned by English crime writer Colin Dexter. The novels were adapted into a very successful television show that occasionally appears in the US on PBS. Morse’s given name is Endeavor, which is also the title of a prequel series “Endeavor” about Morse as a rookie detective. Morse is a very colorful character with a penchant for classical music, real ale and crosswords. I can identify with that …

50 Constellation with Betelgeuse and Bellatrix : ORION