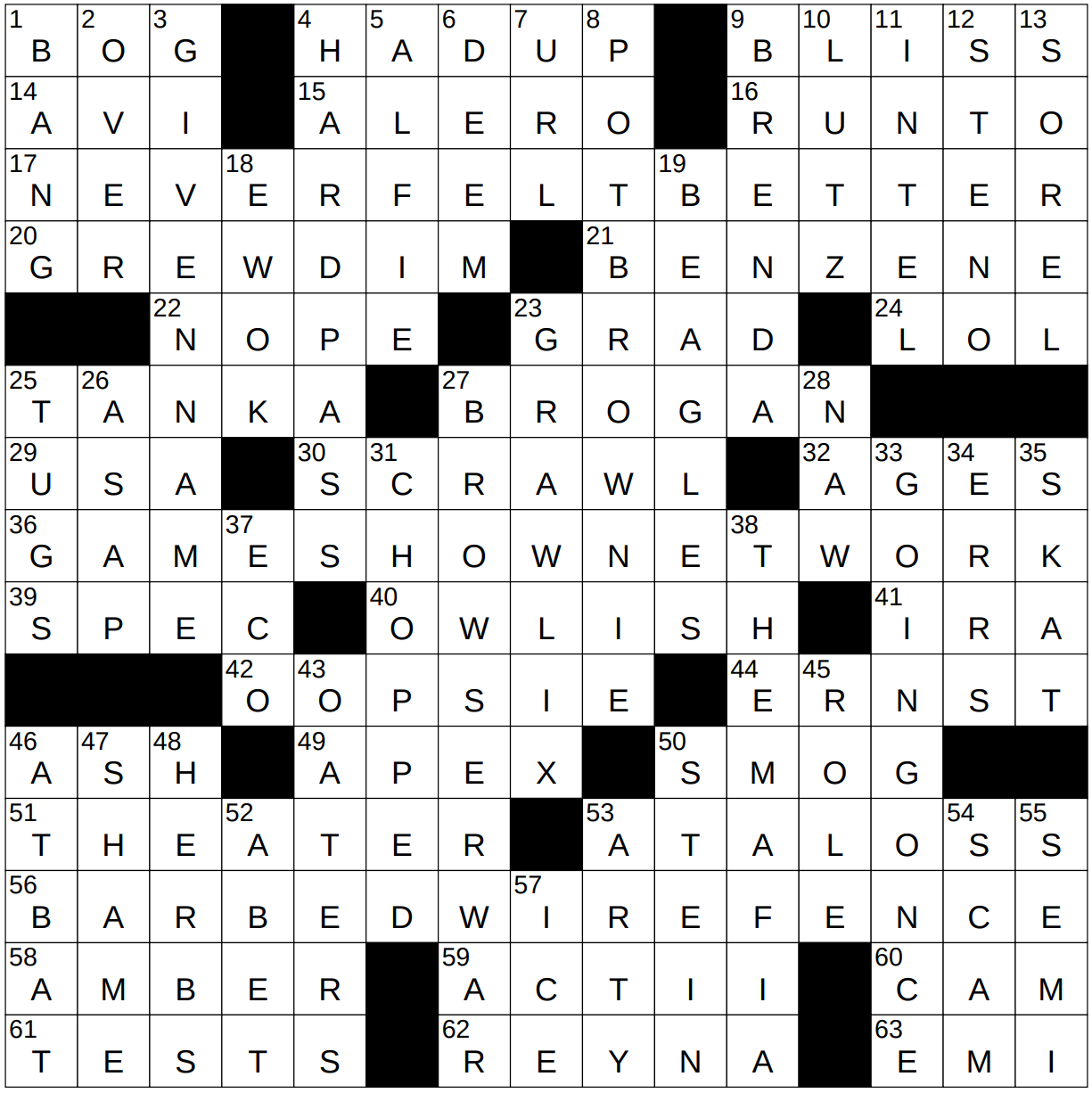 The prefix “avi-” means “bird-related” as in “aviculture”, the breeding of birds. “Avis” is Latin for “bird”.

15 Olds that was once in the news : ALERO

The Alero was the last car made by General Motors under the Oldsmobile brand. It was produced from 1999 to 2004.

Benzene is a remarkable chemical compound, from a molecular standpoint anyway. It is made up of six carbon atoms arranged in a ring, with one hydrogen atom attached to each carbon. Benzene is a significant component of gasoline, and is also very carcinogenic.

A tanka is a Japanese poem comprising five lines with thirty-one syllables, in the pattern 5-7-5-7-7.

39 Writing is sometimes done on it : SPEC

41 Part of some after-work plans, in brief : IRA

John Steinbeck was born not far from here, in Salinas, California in 1902. His most famous novels are probably “The Grapes of Wrath” from 1939, “East of Eden” from 1952 and the novella “Of Mice and Men” from 1937. For his work, Steinbeck won the Nobel Prize for Literature in 1962.

8 Delectable made with grass : POT BROWNIE

A dossier is a collection of papers with information about a person or subject. “Dossier” is a French term meaning “bundle of papers”.

12 One working for a dictator : STENO

The beagle breed of dog is a scent hound, one developed for tracking small game. Because of this characteristic, beagles are often used as detection dogs in customs halls around the world. The world’s most famous beagle is probably Snoopy from the comic strip “Peanuts”.

23 String of typographical symbols, like @%$&!, to represent an obscenity : GRAWLIX

A string of typographical symbols such as “@#%!” that is used to replace a swear word is called a “grawlix”. The term “grawlix” was coined by Mort Walker, the creator of comic strip “Beetle Bailey”, in 1964.

27 Navigator was in the first one : BROWSER WAR

35 Game with matadors and schneiders : SKAT

Actor James Gandolfini is perhaps best known for playing Mafia boss Tony Soprano in the HBO show “The Sopranos”. For my money, one of Gandolfini’s best performances was in the 2013 romantic comedy “Enough Said”, opposite Julia Louis-Dreyfus. Sadly, Gandolfini passed away just before that film was released.

48 Components of a bouquet garni : HERBS

“Bouquet garni” is French for “garnished bouquet”, and is the name given to a bundle of herbs often tied together and added to soups, stocks and stews. The bouquet garni adds flavor, but is removed prior to serving. The list of herbs included in the “bundle” varies, but thyme and bay leaf are often the base ingredients.

52 Give some bad assistance : ABET