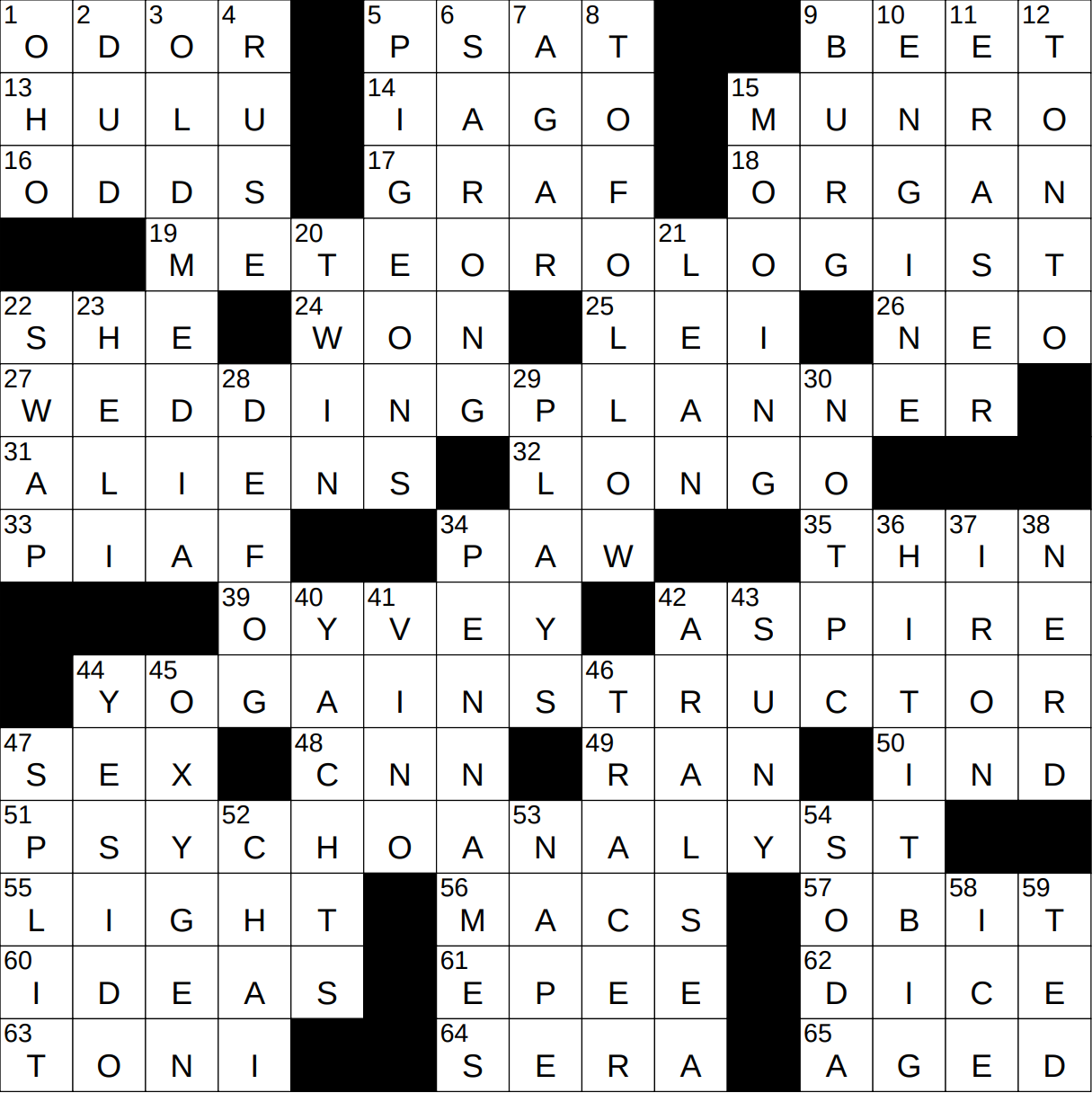 Today’s Theme (according to Bill): Jobs

Themed clues are common phrases reinterpreted to refer to a particular JOB:

14 Shakespeare villain who says “I am not what I am” : IAGO

Alice Munro is a writer from southwestern Ontario in Canada. She won the 2013 Nobel Prize for Literature.

Meteorology is the science dealing with weather and weather conditions. The term “meteorology” comes into English via French from the Greek “meteoron” meaning “thing high up” and “-logia” meaning “treatment of”.

25 Necklace that can be made with kukui nuts : LEI

The literal translation of the title to the French song “La Vie en rose” is “Life In Pink”, but a better translation would be “Life Through Rose-Colored Glasses”.

“Oy vey” is a Yiddish expression of dismay that translates literally as “oh, pain”. The more usual translation is “woe is me”.

55 It travels at nearly 300 million meters per second : LIGHT

In order to be labeled as “single malt” scotch, the whisky must come from a single distillery (hence “single”), and from a mash of malted grain (hence “malt”) that has been processed in a pot still.

A carrier pigeon is a homing pigeon that has a message attached to its leg.

In Italian, in a “ristorante” (restaurant) one might order a glass of “vino” (wine), or maybe two …

42 It was once the world’s fourth-largest lake : ARAL SEA

The Aral Sea is a great example of how humankind can have a devastating effect on the environment. In the early sixties the Aral Sea covered 68,000 square miles of Central Asia. Soviet irrigation projects drained the lake to such an extent that today the total area is less than 7,000 square miles, with 90% of the lake now completely dry. Sad …

43 Sch. system with campuses in Buffalo and Binghamton : SUNY

The State University of New York (SUNY) is the largest system of third-level colleges and universities in the world, with almost 500,00 students attending over 60 campuses across the state.

46 Bullet with a trail : TRACER

Tracer ammunition has a small chemical charge at the base that leaves a bright, smoky trail so that the path of the bullet or projectile is visible. This allows the shooter to correct his or her aim more easily.

In ten-pin bowling, a split takes place when the number-one pin (headpin) is knocked down with the first ball and two or more non-adjacent pins are left standing. The most difficult split to deal with is the infamous 7-10 split, where just the rear pins at the extreme right and left remain standing.

54 Many a cocktail mixer : SODA

The acronym “TED” stands for “Technology, Entertainment and Design”. TED is a set of conferences held around the world by a non-profit group called the Sapling Foundation. The conference subjects are varied, and the meetings are often led by big names such as Bill Clinton, Al Gore, Bill Gates and Jane Goodall. The Sapling Foundation then makes recordings of the conferences available for free online with the intent of disseminating the ideas globally. These conferences are known as “TED Talks”. There are also TEDx events, which are locally-run talks presented under license from TED.
“TED Radio Hour” is an NPR podcast hosted by Guy Raz that uses excerpts from prior TED Talks to examine various subjects of interest.