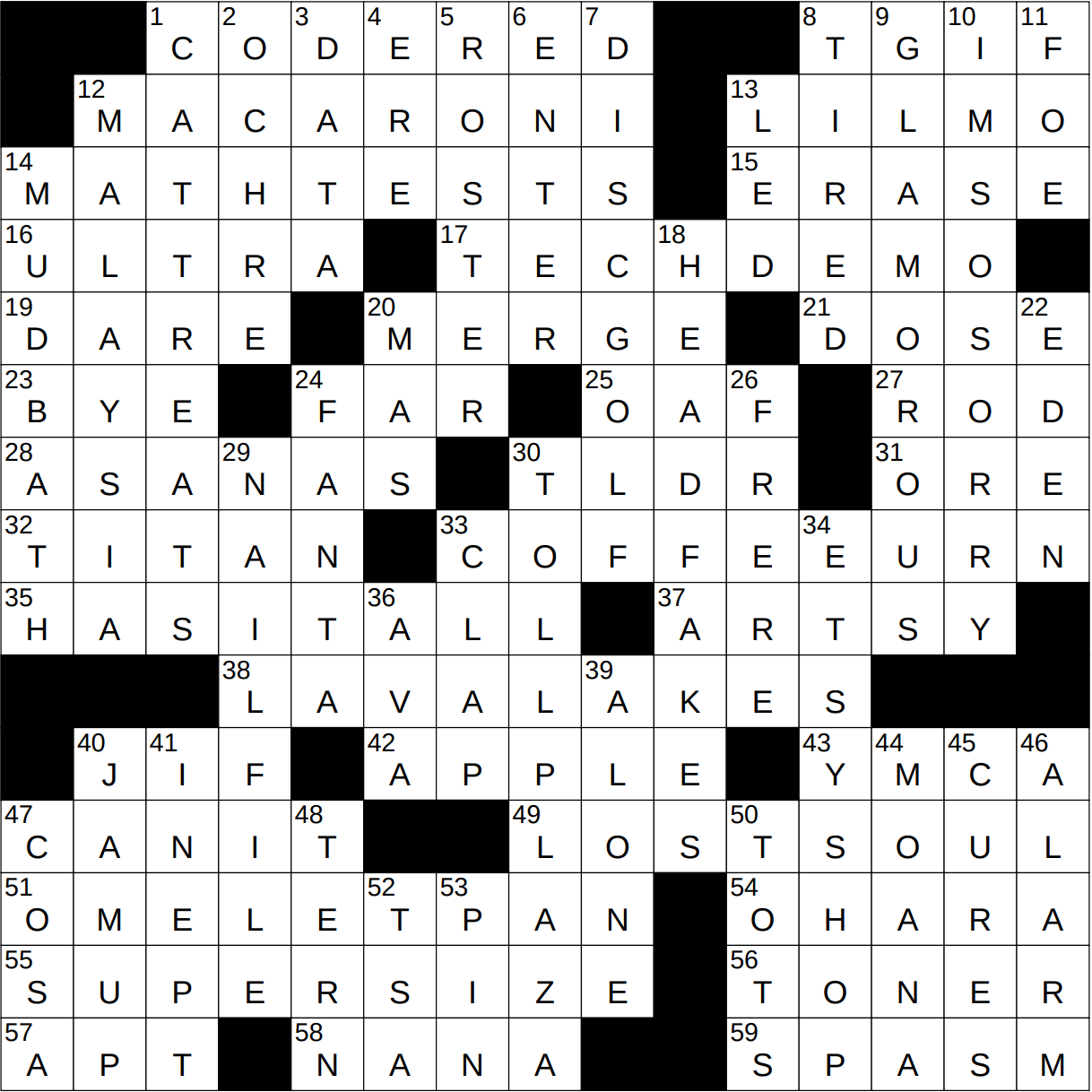 12 Material for a child’s necklace : MACARONI

14 They’ve got their own problems : MATH TESTS

Here’s another term that catches me out all the time, having done my schooling on the other side of the Atlantic. The term “mathematics” is shortened to “math” in the US, but to “maths” in Britain and Ireland.

42 Flavor of many Anglo-Indian chutneys : APPLE

Chutney is a typically southern Asian condiment made from spices with vegetables or fruit. The term “chutney” comes from the Sanskrit “caṭnī” meaning “to lick”.

Kelley O’Hara is a soccer player who was a member of the national team when the US won the FIFA World Cup in 2015, and Olympic gold in 2012.

2 Hue made from limonite : OCHRE

3 What’s spread on a spreadsheet : DATA

Our word “roster”, meaning “list, register”, actually comes from the same root as our word “roast”, would you believe. “Roster” came into English from the Dutch “rooster”, meaning “table, list”. An alternative use of the Dutch “rooster” was “gridiron”, from the “roosten” meaning “to roast”. The connection is that a roster of names is often listed on a sheet of paper that has grid lines resembling the marks left by a gridiron on roasted meat. Quite interesting …

Disc golf is also known as Frisbee golf, and sometimes even Frolf. Believe it or not, disc golf predates the introduction of the Frisbee. The first game was played at a school in Bladworth, Saskatchewan in 1926. The participating schoolkids threw tin lids into circles drawn on a course they created in the school grounds. They named the game “Tin Lid Golf”. By the way, I try to play disc golf at least three times a week. Lots of fun …

12 Land once known as the “peninsula of gold” : MALAYSIA

The Malay Peninsula is a long, thin land mass that forms the southernmost part of the Asian mainland. On the peninsula are the countries of Malaysia, Thailand, Myanmar and Singapore (an island nation off the southern tip of the peninsula). People of the Malay ethnic group are mainly found on the Malay peninsula.

22 Setting of the first panel in Hieronymus Bosch’s “The Last Judgment” : EDEN

The soft drink Fanta has quite an interesting history. As WWII approached, the Coca-Cola plant in Germany had trouble obtaining the ingredients it needed to continue production of the cola beverage, so the plant manager decided to create a new drink from what was available. The new beverage was built around whey (leftover from cheese production) and pomace (left over after juice has been extracted from fruit). The inventor asked his colleagues to use their “imagination” (“Fantasie” in German) and come up with a name for the drink, so they piped up “Fanta!”

Back in the 15th century, a turnpike (tpk., trke.) was a defensive barrier across a road. By the 17th century the term was used for a barrier that stopped travelers until a toll was paid. By the 18th century a turnpike was the name given to a road with a toll.

On a road trip around the country a few years ago, my wife and I had a very disappointing stop in Amherst, Massachusetts intending to visit the old home of Emily Dickinson. We hadn’t done our homework and failed to note that the home was only open for tours on certain days of the week, and not the day we were there (so be warned!). Emily Dickinson wrote nearly 1800 poems in her lifetime, with less than a dozen published before she died in 1886. Emily’s younger sister discovered the enormous collection, and it was published in batches over the coming decades.

A schlemiel is an awkward and clumsy person. “Shlemiel” is the Yiddish for “bungler”, with the term coming from the German story “The Wonderful History of Peter Schlemihl”, published in 1813.

The Transportation Security Administration (TSA) operates its precheck program known as “TSA Pre✓” (or “TSA PreCheck”). Members of the program receive expedited screening at most airports. In order to become a member, a traveler must apply online, appear in person at a designated office for a background check and fingerprinting, and pay a fee for a 5-year membership.