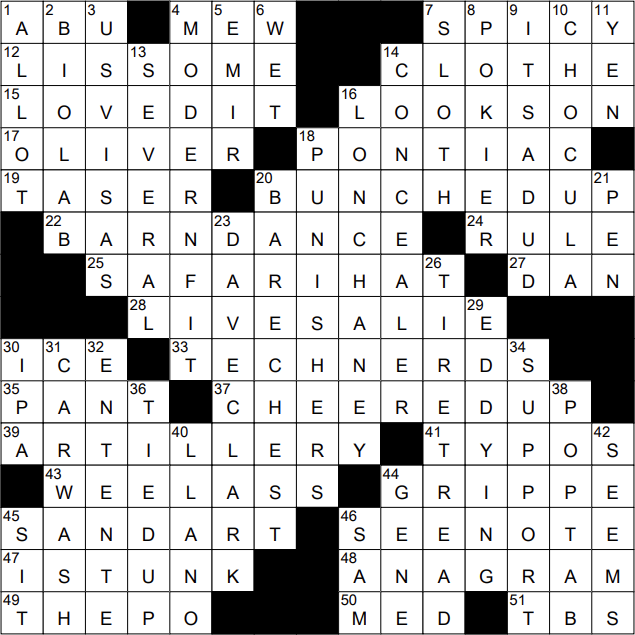 A sylph (also “sylphid”) is a mythological creature, an invisible and wispy being of the air. We also use the term “sylph” to describe a slender and graceful woman.

17 Comedian John who is said to resemble a love child of Harry Potter and Owl from “Winnie-the-Pooh” : OLIVER

“Last Week Tonight” is a satirical late-night talk show hosted by British comedian John Oliver. The HBO show shares a look and feel with Comedy Central’s “The Daily Show”, of which Oliver is an alumnus.

In a legislative body, for example, a “gag rule” prohibits the tabling or discussion of a particular topic.

Pith helmets were worn by mainly Europeans in the tropics, often on safari or as part of a military uniform. The helmet was light in weight, covered with cloth and made from cork or pith. Pith helmets were also called “safari helmets”, “topees” and “topis”.

“Grippe” is an archaic term for influenza, and is the French term for the disease.

The Sand Mandala is a beautiful creation made with colored sand in the Tibetan Buddhist tradition. Mandalas are elaborate designs created by monks over many, many hours. Once the design is completed it is immediately destroyed, symbolizing the transitory nature of material life.

48 Schoolmaster for the classroom, e.g. : ANAGRAM

3 They’re issued by the Bureau of Consular Affairs : US VISAS

7 Along with the anteater, one of two animals in the order Pilosa : SLOTH

General Mills introduced us to a whole series of monster-themed breakfast cereals, starting in 1971 with Count Chocula and Franken Berry. Then came Boo Berry, Fruit Brute and Fruity Yummy Mummy.

16 Silent film star known as the “Man of a Thousand Faces” : LON CHANEY

Swimming trunks are shorts used, usually by males, when swimming. The term “trunks” is used because centuries ago, people routinely wore underwear that covered the entire “trunk” of the body. Swimming usually involved stripping down to those “trunks”. We’re less modest when swimming nowadays, but the term “trunks” has persisted.

The Dave Clark Five came right on the heels of the Beatles in the British Invasion of the sixties. They had a great hit single “Glad All Over” that knocked the Beatles’ “I Want to Hold Your Hand” off the top of the charts in 1964. My favorite tune of theirs, “Bits and Pieces”, followed later that year, and “I Like it Like That” was a hit in 1965. The band’s popularity waned in the late sixties, as they didn’t follow the Beatles and others into the “psychedelic sound”, and they broke up in 1970.

An entente cordiale (sometimes just “entente”) is a friendly understanding, usually between two nations. The term, which translates from French as “cordial agreement”, was first used to describe a set of agreements between the UK and France that were put in place in 1904.