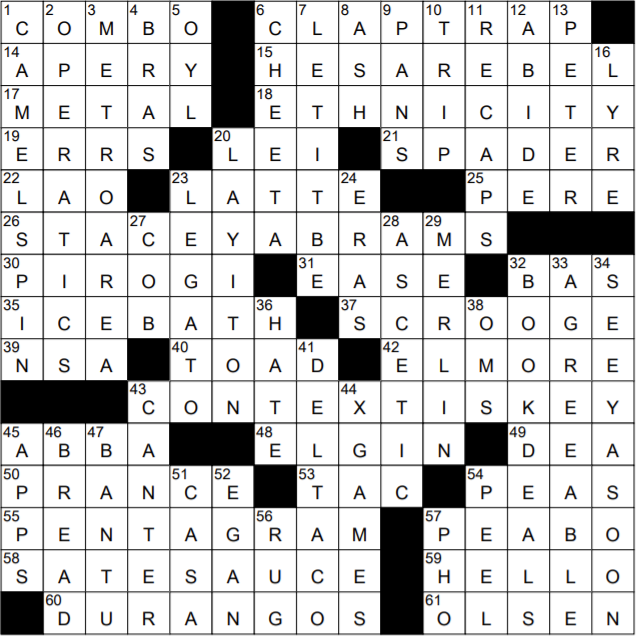 Constructed by: Mary Lou Guizzo
Edited by: Will Shortz

Gene Pitney wrote the sixties hit song “He’s a Rebel”, and he intended it to be recorded by the Shirelles. The Shirelles passed on the song, and so producer Phil Spector gave the song to the Crystals. At the time the song’s recording was scheduled, the Crystals were on tour so Spector had Darlene Love perform the song in the studio, backed by the Blossoms. But when the recording was released, the song was credited to the Crystals and they had to add it to their concert repertoire. So, the Crystals had a number one hit that they didn’t even record!

21 Actor James of “The Blacklist” : SPADER

Actor James Spader’s breakthrough role was the male lead in the 1989 film “Sex, Lies and Videotape”. After building a successful career on the big screen, Spader played some high-profile characters on the small screen in shows like “The Practice”, “Boston Legal” and “The Blacklist”. Spader worked as a yoga instructor while he was starting out his career, and indeed met his ex-wife while working at a yoga studio in the eighties.

22 People with a language of the same name : LAO

Pirogi (also “pierogi”) are Eastern European pies or dumplings, made from unleavened dough, that can have a sweet or savory filling.

40 A sculpture of a three-legged one is considered lucky in feng shui : TOAD

Feng shui is the ancient Chinese tradition of arranging objects, buildings and other structures in a manner that is said to improve the lives of the individuals living in or using the space. “Feng shui” translates as “wind-water”, a reference to the belief that positive and negative life forces ride the wind and scatter, but are retained when they encounter water.

45 Group whose logo is a mirror ambigram : ABBA

Peabo Bryson is a singer from Greenville, South Carolina. Bryson is noted for singing hits on Disney film soundtracks, often duets. Examples are “Beauty and the Beast” with Céline Dion, and “A Whole New World (Aladdin’s Theme) with Regina Bella.

58 Condiment made with peanuts : SATE SAUCE

1 Figure skating move based on the arabesque in ballet : CAMEL SPIN

A camel spin is a figure skating move in which the skater spins on one leg with the free leg extended outwards with the knee held above the hip. The version of the move known as a flying camel spin is initiated with a jump before adopting the formal spin position. The latter was first performed by US figure skater Dick Button.

In the ballet position known as “arabesque”, the dancer stands on one leg, with one leg extended behind the body.

The chimpanzee named Cheeta was a very popular character in most of the Tarzan movies and television shows. However, he/she (the sex changed back and forth) never appeared in the original novels by Edgar Rice Burroughs.

7 1970 music documentary that won an Oscar for Best Original Score : LET IT BE

“Let It Be” was the last album that the Beatles released as an active group playing together. The title song was written by Paul McCartney, and it is clearly one of his own favorites. McCartney says that he was inspired to write the song after having had a dream about his mother (who had died some years earlier from cancer). In fact, he refers to her (Mary McCartney) in the line “Mother Mary comes to me”. Paul’s first wife, Linda, is singing backing vocals on the song, the only time she is known to have done so in a Beatles recording. 28 years after that 1970 recording was made, Paul, George and Ringo sang “Let It Be” at a memorial service for Linda, who was also lost to cancer. Sad stuff, but a lovely song …

The zither is a stringed instrument, one in which the strings do not extend beyond the bounds of the sounding box. That means that the instrument has no neck, unlike a guitar.

23 Italian for “tied together” : LEGATO

28 Antithesis of a hedonist : ASCETIC

A hedonist is someone who seeks to maximize the amount of pleasure in his or her life. “Hedone” is the Greek word for “pleasure”.

46 It’s found at the bottom of the food pyramid : BREAD

A chemical peel is a technique used to improve the look and feel of the skin. It involves using a chemical to deliberately injure the outermost layer of the skin. The damaged skin dies and peels off, revealing regenerated skin below.