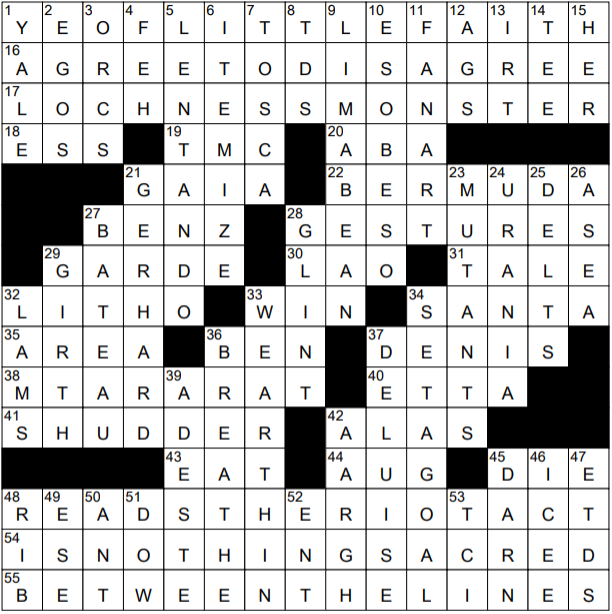 17 Subject of the so-called “surgeon’s photograph” of 1934 : LOCH NESS MONSTER

The Surgeon’s Photograph is an image that was taken in 1934, supposedly of the Loch Ness Monster. It is perhaps the most famous picture of Nessie to this day, the one with a “head” and “neck” sticking up out of the water. The picture’s renown doesn’t seem to have abated, even though in the mid-nineties the photograph was shown to be a hoax. The picture is called the Surgeon’s Photograph because it was taken by a Dr. Wilson.

The leading letter in the word “squad” is a letter S (ess).

22 British territory in the Atlantic : BERMUDA

“En garde” is a French term that has been absorbed into the sport of fencing. Originally a warning (“on guard!”), the phrase is used at the start of an encounter to warn the fencers to take a defensive position.

30 Language spoken along the Mekong : LAO

Lithography is a printing technique that was invented in 1796 as a cheap way to publish theatrical works. In the litho process the image is drawn on a metal plate, although originally it was drawn on a stone (hence the prefix “litho-“). The image is drawn in such a way that some regions of the plate repel ink, and then when paper is applied to the plate, those areas are ink-free. A “lithograph” is a print that is made using the technique, and is often a reproduction of a work of art.

“Bailiwick” is a word dating back to the mid-1600s. The term originally meant “district of a bailiff”.

Denis Diderot was a French philosopher and writer who is best known as chief editor and co-founder of “Encyclopédie, ou dictionnaire raisonné des sciences, des arts et des métiers” (Encyclopedia, or a Systematic Dictionary of the Sciences, Arts, and Crafts). The “Encyclopédie” was published between 1751 and 1772, and is famous for representing the thought of the Age of Enlightenment.

38 High point of the Old Testament, for short : MT ARARAT

The lima bean is also known as the butter bean or madagascar bean. It was introduced to Europe from the area around Lima, Peru, hence the name.

The X-Men are a team of superheroes created by Stan Lee for Marvel Comics. Nowadays, the X-Men are perhaps best known as the subject of a series of movies, with Hugh Jackman playing Wolverine and Patrick Stewart playing Professor Xavier (or simply “Professor X”). Some very respected actors have also played the villains whom the X-Men have to battle. For example, the enemy called Magneto is portrayed by veteran Shakespearean actor Sir Ian McKellen.

The great Italian polymath Galileo Galilei made many discoveries in the world of astronomy. For example, he was the first to identify Jupiter’s four largest moons. Notably, Galileo used his telescope to confirm the heliocentric model, in which the planets revolve around the Sun. For his denial of geocentrism, Galileo spent his final days under house arrest, having been deemed “suspect of heresy” by the Roman Inquisition in 1615.

“Bateau” is a French word meaning “boat”. The term can be used in English to describe any small craft, but in particular in North America to describe a flat-bottomed boat with a shallow draft that was especially popular in the colonial period.

Actor Burt Reynolds is famous for playing Bandit in “Smokey and the Bandit” and Lewis Medlock in “Deliverance”, but his critically acclaimed performance was as Jack Horner in the 1997 movie “Boogie Nights”. Off the screen, Reynolds was quite the man around town, and was romantically linked to the likes of Tammy Wynette, Lucie Arnaz (daughter of Lucille Ball), Sally Field, Dinah Shore and Chris Evert. He was married to Judy Carne, as well as Loni Anderson.

47 Some terminal info, for short : ETDS

Amarillo, in the Texas Panhandle, is known as “The Yellow Rose of Texas” because Amarillo is the Spanish for “yellow”. The city was originally called Oneida.

Tele-Communications, Inc (TCI) was the largest provider of cable television service in the US for a while. The company was founded in 1968 and was headquartered in Denver. TCI was bought by AT&T in 1999.