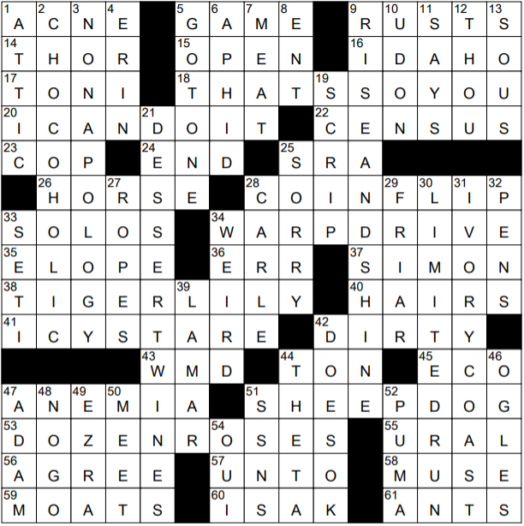 Tiger Lily is a character appearing in the 1904 play “Peter Pan” by JM Barrie. She is the daughter of the chief of the Piccanniny tribe of Native Americans who live in Neverland. Tiger Lily is besotted with Peter, and jealous of Wendy and Tinker Bell.

47 Cause of weakness : ANEMIA

51 What Babe aspires to be in “Babe” : SHEEPDOG

60 “Out of Africa” author Dinesen : ISAK

1 Story that goes over your head? : ATTIC

J. R. R. Tolkien’s novel “The Lord of the Rings” consists of the three volumes:

29 Accomplice in “Romeo and Juliet” : FRIAR

Carl Sagan was a brilliant astrophysicist, and a great communicator. He was famous for presenting obscure concepts about the cosmos in such a way that we mere mortals could appreciate. Sagan also wrote the novel “Contact” that was adapted into a fascinating 1997 film of the same name starring Jodie Foster.

39 Rapper/producer who won the 2018 Pulitzer for Music : LAMAR

Kendrick Lamar is a hip-hop singer from Compton, California. Lamar’s full name is Kendrick Lamar Duckworth, with the singer’s given name honoring Motown artist Eddie Kendricks. Notably, his 2017 album “Damn” won a Pulitzer Prize for Music, becoming the first non-classical or non-jazz album to do so.

44 Letter in the Greek spelling of Athens : THETA

The letter theta is the eighth in the Greek alphabet, and the one that looks like the number zero with a horizontal line across the middle.

Air France is my favorite airline (okay … after Aer Lingus, the Irish airline). I used to fly Air France a lot (I lived in France for a while), but haven’t done so since the company merged with KLM in 2004. Back in 2008, Air France-KLM was the world’s largest airline in terms of revenue.