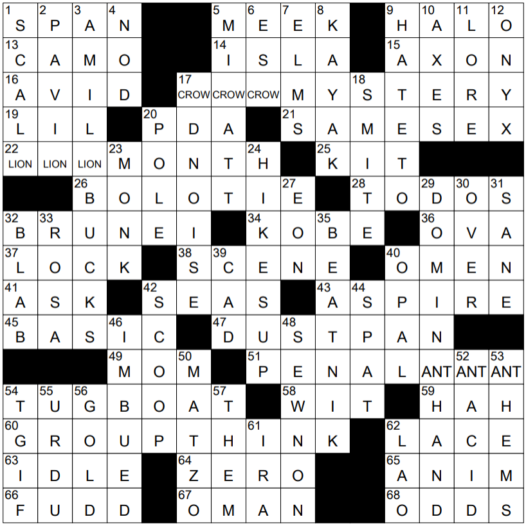 We have a rebus today, with a twist. Three down-answers use CROW in one square, three use LION, and three use ANT. The corresponding across-answers use MURDER (of CROWS), PRIDE (of LIONS), and COLONY (of ANTS). Very, very clever …

5 Like the eventual inheritors of the earth, in Matthew : MEEK

Scottish writer Sir Arthur Conan Doyle is most closely associated with his wonderful character Sherlock Holmes. Doyle also wrote a series of science fiction stories featuring the character Professor Challenger. The first book in which Challenger appears is the famous “The Lost World”, a story about prehistoric creatures that are found living in the modern age on an isolated plateau in South America.

There doesn’t seem to be a definitive etymology for “murder” as the collective noun for crows. One suggestion is that it comes from the scavenging behavior of crows, sometimes feeding on rotting bodies of dead animals.