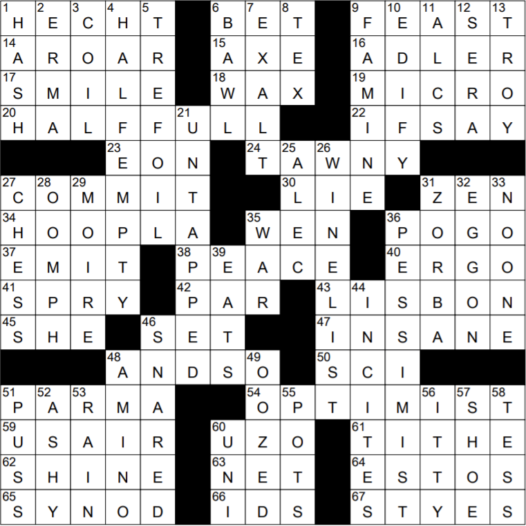 Themed answers in the across-direction are associated with OPTIMISM, and in the down-direction with PESSIMISM. Also, the themed answers come in pairs that cross each other in the grid:

Ben Hecht had many jobs in Hollywood, but mainly is remembered as a screenwriter. Hecht earned the nickname “the Shakespeare of Hollywood” largely due to the large number of screen credits he received, getting writing credit for about seventy films. Included in the list of screenplays he worked on are “The Front Page”, “Some Like It Hot”, “Gone with the Wind” and “A Farewell to Arms”.

Debra Messing is most famous for playing Grace Adler on the television series “Will & Grace”.

The hidden-camera prank show called “Candid Camera” was created and produced by Allen Funt, and first aired on television in 1948. The show actually started as “Candid Microphone”, a radio series that was broadcast from 1947 until it was eclipsed by the television version.

Something described as tawny is yellow-brown or tan in color. The term comes from the Anglo-French “tauné” meaning “the color of tanned leather”.

“Ergo” is a Latin word meaning “hence, therefore”, and one that we absorbed directly into English.

That would be golf …

Vasco da Gama left on his first voyage of discovery in 1497. da Gama journeyed around the Cape of Good Hope, the southernmost tip of Africa, and across the Indian Ocean making landfall in India. Landing in India, his fleet became the first expedition to sail directly from Europe to the sub-continent. Vasco da Gama was well known for acts of cruelty, especially on local inhabitants. One of his milder atrocities was inflicted on a priest whom he labeled as a spy. He had the priest’s lips and ears cut off, and sent him on his way after having a pair of dog’s ears sewn onto his head.

Parma is a city in northern Italy that is famous for its ham (prosciutto) and cheese (parmesan). The adjective “Parmesan” means “of or from Parma”.

A trefoil is a symbol that appears like a trifoliate leaf, a leaf with three leaf-like parts.

The 1956 song “Que Será, Será (Whatever Will Be, Will Be)” was first performed by Doris Day in the Hitchcock film “The Man Who Knew Too Much”. Day later used the same tune as the theme song for the sitcom “The Doris Day Show” that aired in the late sixties and early seventies.

The story of the Wooden Horse of Troy is told in Virgil’s poem “The Aeneid”. According to the tale, the city of Troy finally fell to Greeks after a siege that had lasted for ten years. In a ruse, the Greeks sailed away in apparent defeat, leaving behind a large wooden horse. Inside the horse were hidden 30 crack soldiers. When the horse was dragged into the city as a victory trophy, the soldiers sneaked out and opened the city’s gates. The Greeks returned under cover of night and entered the open city.

25 Eldest of the Baldwin brothers : ALEC

The film “Zorba the Greek” and the musical “Zorba” are adaptations of the 1952 novel “Zorba the Greek” by Nikos Kazantzakis. The 1964 film version stars Anthony Quinn in the title role, and Alan Bates. The movie is set and was filmed on location on the island of Crete, the home of author Kazantzakis.

I have to confess that I have tried to read Leo Tolstoy’s “War and Peace” twice in my life, and failed both times (it is l-o-n-g; 1,225 pages in the first published edition). Even though the 1956 movie adaptation runs for 3 1/2 hours, it’s still the easy way out! The film version stars Audrey Hepburn as Natasha Rostova and Henry Fonda as Count Pierre Bezukhov.