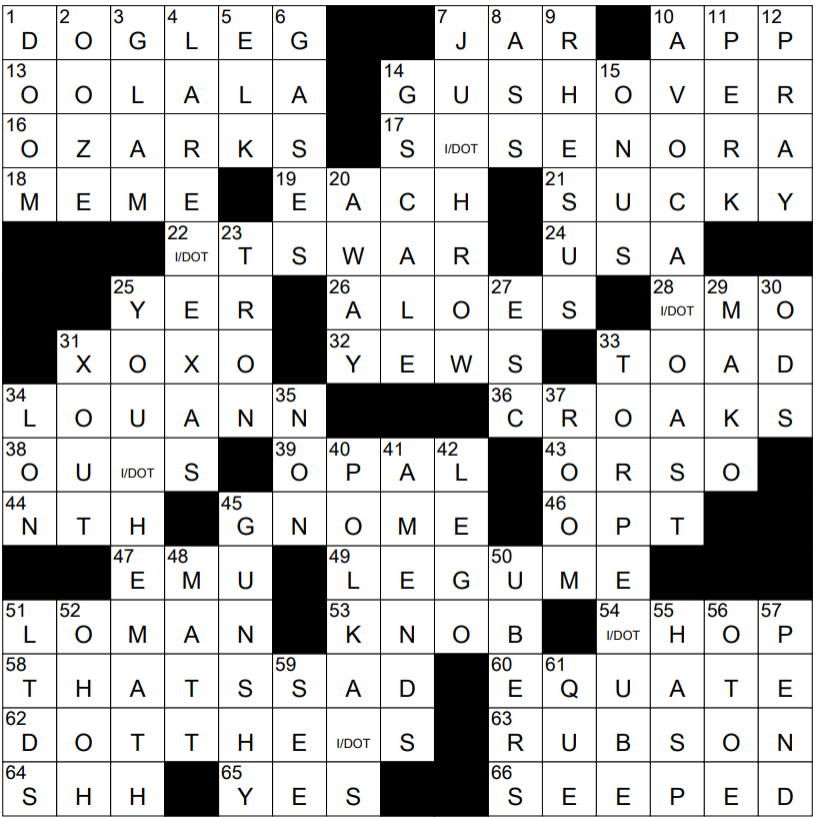 Constructed by: August Miller
Edited by: Will Shortz

Today’s Reveal Answer: Dot the Is

Some squares in today’s grid have a DOT over a letter I. The letter I is used in the across-answers, and the letters DOT are used in the down-answers:

16 Home of the Boston Mountains : OZARKS

The Ozark Mountains aren’t really mountains geographically speaking, and so the Ozarks are better described by the alternate name, the Ozark Plateau. It’s not really certain how the Ozarks got their name, but my favorite theory is that “Ozarks” is the phonetic spelling of “aux Arks”, short for “of Arkansas” in French.

“Yer Blues” is a John Lennon song, credited to Lennon and McCartney, that is a track on “The White Album”, recorded in 1968. Lennon recorded the song while the band was on retreat in Rishikesh, India, and while Lennon was “trying to reach God and feeling suicidal”.

Jim Nabors was discovered by Andy Griffith and brought onto “The Andy Griffith Show” as Gomer Pyle, the gas station attendant. Famously, Nabors then got his own show called “Gomer Pyle, U.S.M.C.” On the new show, Gomer had a girlfriend, Lou-Ann Poovie, played by Elizabeth Macrae.

Girasol is a type of opal that exhibits a bluish glow when illuminated. The stone is also known as “water opal”, especially when sourced from Mexico.

51 “Death of a Salesman” surname : LOMAN

“Death of a Salesman” is a famous play by Arthur Miller that was first produced in 1949. “Death of a Salesman” won a Pulitzer and several Tony Awards over the years. The “Salesman” is the famous character Willy Loman. The play originally opened up on Broadway and ran for 724 performances. It was directed by Elia Kazan, and the lead role was played by veteran actor Lee J. Cobb.

53 It may turn slowly in a horror movie : KNOB

That would be a doorknob slowly turning, as you dial 911 …

62 Attend to details … or a hint to entering six Down answers in this puzzle : DOT THE IS

Roxy Music is a British band formed by Bryan Ferry, who also served as the lead singer. One of the group’s more famous former band members was Brian Eno, someone who turns up in crosswords far too often …

Author Larry McMurtry’s most famous novels are 1961’s “Horseman, Pass By” (adapted to film as “Hud”), 1966’s “The Last Picture Show”, 1975’s “Terms of Endearment” and 1985’s “Lonesome Dove” (for which McMurtry won a Pulitzer). He also co-wrote the adapted screenplay for 2005’s “Brokeback Mountain”, which is based on a short story by Annie Proulx.

5 Game measured by its number of points : ELK

The chemical element nitrogen (atomic number 7) was first isolated and discovered by Scottish physician and chemist Daniel Rutherford in 1772. Rutherford did not identify nitrogen as an element, but isolated it as a gaseous component of air that did not support combustion, and that he called “noxious air”.

Neon was discovered in 1898 by two British chemists, Sir William Ramsay and Morris Travers. They chilled a sample of air, turning it into a liquid. They then warmed that liquid and separated out the gases that boiled off. Along with nitrogen, oxygen and argon (already known), the pair of scientists discovered two new gases. The first they called “krypton” and the second “neon”. “Krypton” is Greek for “the hidden one” and “neon” is Greek for “new”.

Avocado toast is trendy, but delicious. My homemade version includes a generous sprinkling of freshly cracked black pepper, and a splash of hot sauce. Yum …

“Magic Mike” is a 2012 movie starring Tatum Channing as a young male stripper. The film’s storyline is loosely based on Channing’s real-life experiences, as he worked as a stripper in Tampa, Florida when he was 18 years old.