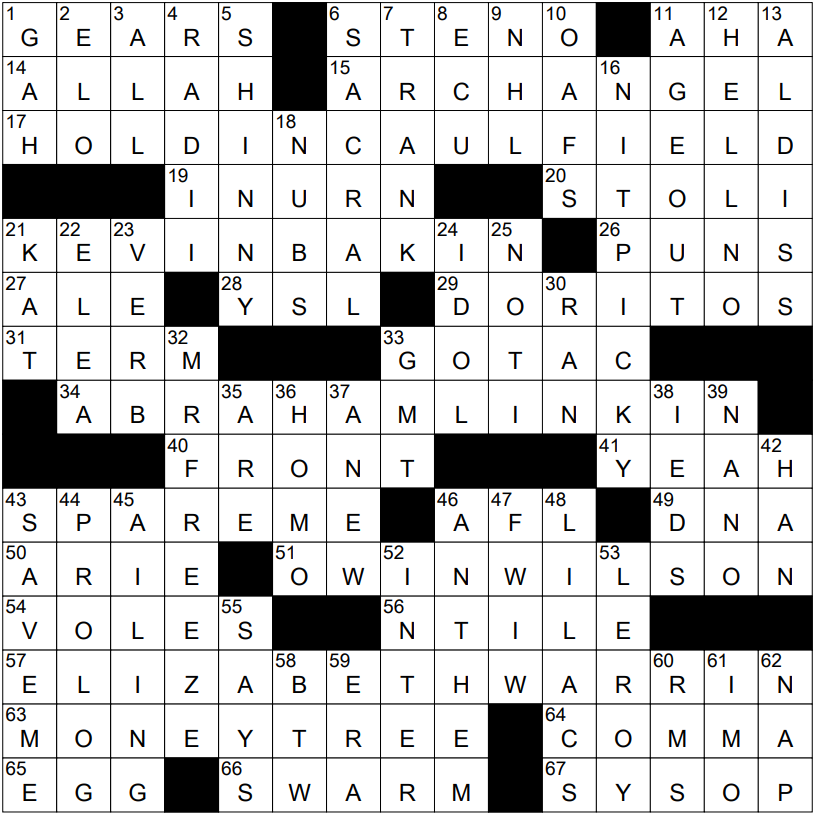 Themed answers sound like the names of famous people:

Kevin Bacon is an actor from Philadelphia who appeared first on the big screen in the 1978 comedy “National Lampoon’s Animal House”. That wasn’t to be the big break that Bacon needed though, which came with “Footloose” in 1984. A fun fact about him is that he is the subject of a popular trivia game called “Six Degrees of Kevin Bacon” in which players have to show that a particular actor can be related to Kevin Bacon in fewer than six links, with each link being a movie in which two actors appear together.

28 Letters on a luxury handbag : YSL

President Lincoln’s actions that resulted in the freeing of slaves led to him earning the nickname “the Great Emancipator”.

The Emancipation Proclamation was issued by President Abraham Lincoln on January 1, 1863 during the Civil War. The order freed slaves in Confederate territory, but did not apply to the five slave states that were not in rebellion. Slavery became illegal in the whole of the United States in December 1865 when the Thirteenth Amendment to the US Constitution was ratified.

Vole populations can increase very rapidly. Mama vole is pregnant for just three weeks before giving birth to litters of 5-10 baby voles. Then, the young voles become sexually mature in just one month! If you have one pregnant vole in your yard, within a year you could have over a hundred of the little critters.

A kind blog reader pointed out to me that the use of “shimmy up” has an interesting history. One can also say “shinny up” a rope or pole, meaning to climb using one’s shins. This was the original term for the maneuver, but then it was mixed up with the word “shimmy”, a term from dancing meaning to shake from side to side. Now it seems that about half of us use “shimmy up” and half “shinny up”. I guess we are watching our language evolve!

The ecu is an Old French coin. When introduced in 1640, the ecu was worth three livres (an older coin, called a “pound” in English). The word “ecu” comes from the Latin “scutum” meaning “shield”. The original ecu had a coat of arms on it, a shield.

9 Org. for Ducks and Penguins : NHL

The Walt Disney Company founded the Mighty Ducks of Anaheim hockey team in 1993, with the franchise’s name being a nod to the 1992 Disney movie called “The Mighty Ducks”. The name was changed to the Anaheim Ducks when Disney sold the team before the 2006-2007 season.

The Penguins are the professional hockey team based in Pittsburgh. They have been around since 1967, and were one of the first expansion teams when the NHL grew from six to twelve teams. The expansion team were to play in Pittsburgh’s Civic Arena, a domed structure known locally as the Igloo. It was the “Igloo” name that inspired a fan to suggest the “Penguins” moniker, which won a contest to choose the name of the new franchise.

According to some sources, Samuel L. Jackson is the highest-grossing actor of all time. He earns that ranking because of his talent and box-office draw, but also because of the large number of films in which he appears.