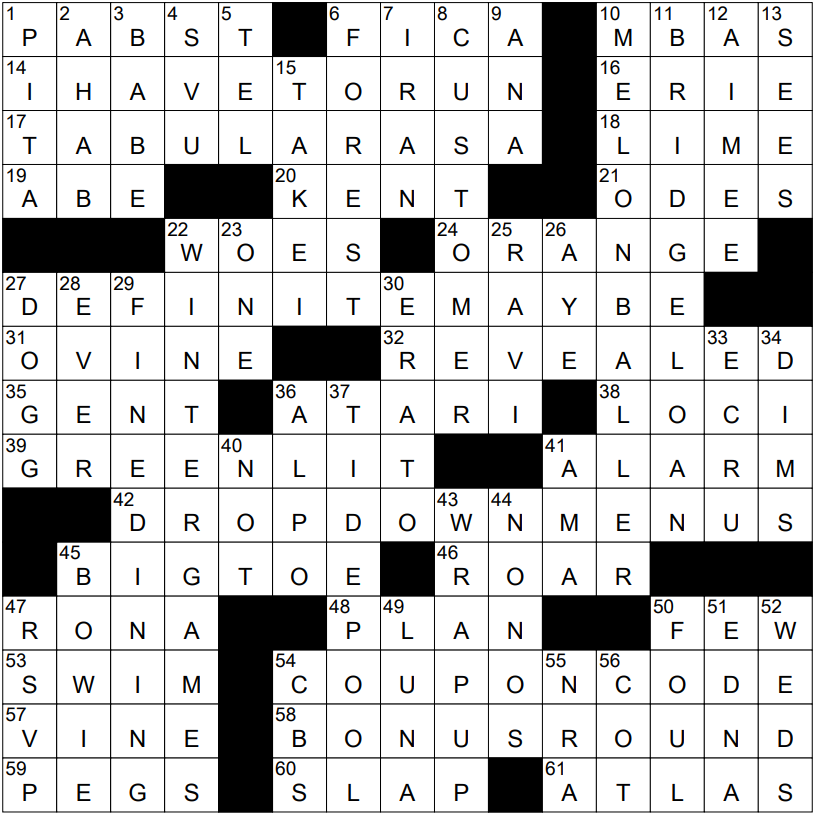 Bernard Stroh was the son of a German brewer. Bernard immigrated to the US in 1848 and set up his own brewery in 1850 in Detroit. Years later, the Stroh Brewing Company introduced a European process called fire-brewing. This results in higher temperatures at a crucial stage in the brewing process, supposedly bringing out flavor. Apparently, Stroh’s is the only mainstream American beer that still uses this process.

The Joseph Schlitz brewery in MIlwaukee was once the largest beer producer in the country. The brewery was founded in 1849, and was acquired by Joseph Schlitz in 1858. Schlitz had worked in the brewery as a bookkeeper and took over management of the company after the founder, August Krug, passed away. A few years later, Schlitz married the founder’s widow and changed the company name to his own.

6 Acronym on a pay stub : FICA

The Federal Insurance Contributions Act tax (FICA) was introduced in the 1930s as part of President Roosevelt’s New Deal. FICA payments are made by both employees and employers in order to fund Social Security and Medicare.

Tabula rasa (plural “tabulae rasae”) is the idea that people are born with a “blank, clean slate”, and that knowledge comes from experience and perception. “Tabula rasa” translates literally from Latin as “scraped tablet”.

In the animated TV show called “The Simpsons”, Grampa Abe Simpson is voiced by Dan Castellaneta, the same actor who provides the voice for Homer.

20 Name of a family that took in an extraterrestrial : KENT

36 Company whose corporate logo is known as “the Fuji” : ATARI

On a merchant ship, the first mate (sometimes “first officer, chief mate”) is the highest-ranking deck officer, and reports directly to the captain.

Tha Dogg Pound is a rap duo made up of Daz Dillinger and Kurupt.

33 Color whose name comes from the French for “unbleached” : ECRU

The Soviet Union’s Luna program sent a series of unmanned spacecraft to the moon, some ebing orbiters and some landers. Luna 2 hit the moon’s surface in 1959, and became the first manmade object to reach the moon. Luna 17 and Luna 21 carried robotic vehicles that roamed around the moon in 1970 and 1973. Some Luna missions went to the moon, collected samples and then returned those samples to Earth.

In the musical “Hairspray”, Edna Turnblad is one of the main characters. “Hairspray” was originally a John Waters movie, from 1988. In that film, Edna was played by Divine, a famous drag queen who featured in many Waters films. In the stage musical that opened in 2002, the original Broadway cast featured Harvey Fierstein as Edna. The 2007 movie adaptation of the musical had John Travolta in the role.

James Corden is an English actor and comedian who is best known in the US as the host of “The Late Late Show”, a talk show for which he took the helm in 2015. Prior to establishing his career on this side of the Atlantic, Corden was quite the celebrity in Britain and Ireland. He appeared in the sitcom “Gavin & Stacey” (great show), which he also co-wrote. He also hosted the comedy-sports panel show “A League of Their Own” (also great).