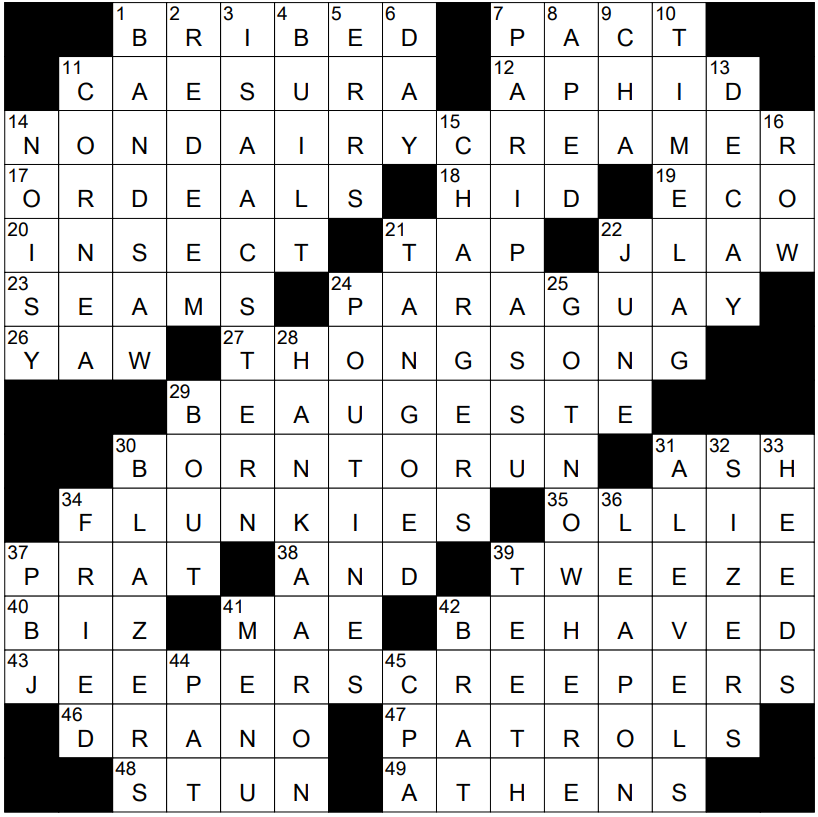 Constructed by: Natan Last
Edited by: Will Shortz

11 Pause in the middle of a line of poetry : CAESURA

In poetry, a caesura is an audible pause that breaks up a line of verse. An example would be (from Alexander Pope): “To err is human; to forgive, divine.”

20 Last word of the first sentence of Kafka’s “The Metamorphosis” : … INSECT

“The Metamorphosis” is a famous novella by Franz Kafka that is regarded by many as one of the greatest pieces of short fiction written in the 20th century. The story tells of the metamorphosis of Gregor Samsa into a gigantic insect. His sister Grete Samsa becomes his caregiver.

Paraguay is a landlocked country in South America that is bordered by Argentina, Brazil and Bolivia. Paraguay’s capital is Asunción, which is home to almost a third of the nation’s population.

“Beau Geste” is a 1924 novel by the British writer P. C. Wren. The hero of the piece is Michael “Beau” Geste, an upper-class Englishman who joins the French Foreign Legion and embarks on a life of adventure and intrigue.

“Born to Run” is a 1975 Bruce Springsteen song that was the title track of an album of the same name. Springsteen wrote the song, but he wasn’t actually the first to record it. Allan Clarke of the Hollies had that honor, but the release of the Clarke version was delayed until Springsteen’s hit the record shelves. “Born to Run” became Springsteen’s first US Top 40 hit.

31 Something picked up by a silent butler : ASH

A silent butler is a small container with a handle and lid that is used for collecting ash or crumbs from the dinner table.

A minion is a servile follower, a yes-man. The term “minion” comes from the French word “mignon” meaning “favorite, darling”.

“Prat” is a slang term for the buttocks. A “prat-fall” is when someone falls and lands on the buttocks. The term “prat” is also British slang for “contemptible person”.

Tweezers are small metal pincers used in handling small objects. Back in the 1600s, “tweeze” was the name given to the case in which such an implement was kept, and over time the case gave its name to the device itself. “Tweeze” evolved from “etweese”, the plural of “etwee”, which in turn came from “étui “, the French word for “small case”.

A bandsaw has a blade that forms a “band”, a continuous loop that rotates around a pair of wheels positioned one above the other.

3 Musician who helped save Carnegie Hall from demolition : ISAAC STERN

Isaac Stern was Ukrainian-born, and moved with his family to San Francisco at a very young age. He was a wonderful violin virtuoso, and was awarded the Presidential Medal of Freedom by President George H. W. Bush in 1992. Stern passed away in 2001 at 81 years of age.

The prestigious Carnegie Hall in midtown Manhattan opened for business in 1891. The magnificent edifice was named after the philanthropist Andrew Carnegie, who provided the funds for construction.

Thomas Pynchon is an American novelist who won the 1973 National Book Award for Fiction for “Gravity’s Rainbow”. He is a well-known recluse, and is famously shy of dealing with the media. There are remarkably few photographs of Pynchon in the public domain.

“Pari passu” is Latin for “with an equal step” and is used in the sense of “ranking equally” or “without preference”.

Mandarin Chinese is a group of dialects that are spoken across northern and southwestern China. If Mandarin is considered as one language, then it has more native speakers than any other language on the planet.

11 Part of the body first successfully transplanted in 1905 : CORNEA

21 Danced to the music of Carlos Acuña, say : TANGOED

Gwendolyn Brooks was a poet from Chicago who was the first African American to win a Pulitzer. She won the Pulitzer Prize for Poetry in 1950 for her book of poetry titled “Annie Allen”.

“Poutine” is a dish that originated in rural Quebec in the late fifties. It is made with french fries covered in a brown gravy sauce, all topped with cheese curds.

28 Record holder for the most M.L.B. All-Star selections : HANK AARON

30 Attire at some academies : BLAZERS

A blazer is a less formal version of a suit jacket, usually one with a less formal cut and often metal buttons. The original “blazer” was a red jacket worn by members of the rowing club at Cambridge University in England. The “blazer” is so called because the Cambridge version was “blazing red” in color.

45 Occupation of Leo Bloom in “The Producers,” for short : CPA

“The Producers” is a 1968 satirical movie written and directed by Mel Brooks, and was indeed the first film he ever directed. Brooks adapted the movie into a hugely successful Broadway musical that won a record 12 Tony Awards. The original leads in the stage show, Nathan Lane and Matthew Broderick, then appeared in a 2005 movie adaptation of the musical version of the original film.