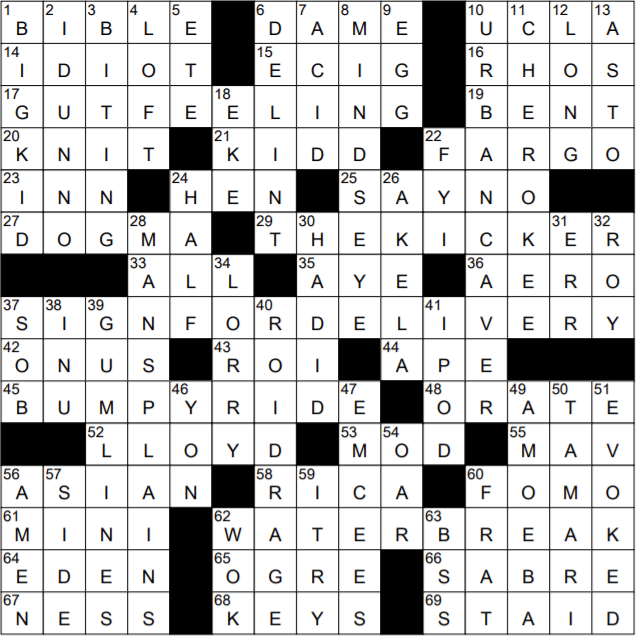 Constructed by: Rose Conlon
Edited by: Will Shortz

Themed answers are common phrases reinterpreted as SIGNS of an impending DELIVERY, the birth of a child:

Gideons International is an evangelical Christian group that focuses on distributing free copies of the Bible across the world, most visibly in bedside lockers in hotel rooms. Apparently, the Gideons are handing out free Bibles today at the rate of two per second.

Rho is the Greek letter that looks just like our Roman letter “p”, although it is equivalent to the Roman letter R. It is the 17th letter in the Greek alphabet.

William Kidd was a Scottish privateer who went by the name “Captain Kidd”. Although Kidd was a privateer, someone authorized by the government to attack foreign shipping, he was eventually arrested and executed for piracy. There is a common opinion held today that the charges against Kidd were actually trumped up. Captain Kidd’s story was the basis of a 1945 film called “Captain Kidd” starring Charles Laughton in the title role. Laughton also appeared as Captain Kidd in 1952’s comic movie “Abbott and Costello Meet Captain Kidd”.

Fargo, North Dakota is the biggest city in the state. The original name for the city was Centralia, when it was a stopping point for steamboats that traveled the Red River in the late 19th century. The town really grew with the arrival of the Northern Pacific Railway, so the name “Fargo” was adopted in honor of one of the railroad company’s directors, William Fargo (of Wells Fargo Express fame).

The architect Frank Lloyd Wright embraced the philosophy of designing structures that were in harmony with the environment. One of his most famous works is an elaborate home in rural Pennsylvania known as Fallingwater, which is partially built over a waterfall.

5 When to take a cruise on la Seine : ETE

The Seine is the river that flows through Paris. It empties into the English Channel to the north, at the port city of Le Havre.

11 Like Sequoyah, for whom the tree is named : CHEROKEE

The Cherokee Nation of Oklahoma are descended from the Old Cherokee Nation that was forced to relocate from the Southeast in the late 1830s on the infamous Trail of Tears. Today’s Cherokee Nation numbers about 300,000 people, with almost two thirds of that population living in Oklahoma.

Akela is the wolf in “The Jungle Book” by Rudyard Kipling. The wolf gave his name to a cubmaster in the scouting movement, who is now known as “Akela”.

28 Speaks patronizingly, in a way : MANSPLAINS

Tottenham is an area in north London in England. It is home to a famous football (soccer) club called Tottenham Hotspur, the team that I used to follow as a kid many moons ago …

The Shiba Inu is a Japanese breed of dog that was developed for hunting. Although the exact etymology of “Shibu” is unclear, the term translates as “brushwood”. “Inu” is Japanese for “dog”.

Tamari is a variety of soy sauce that is made without wheat, and so is often used by those on a gluten-free diet.