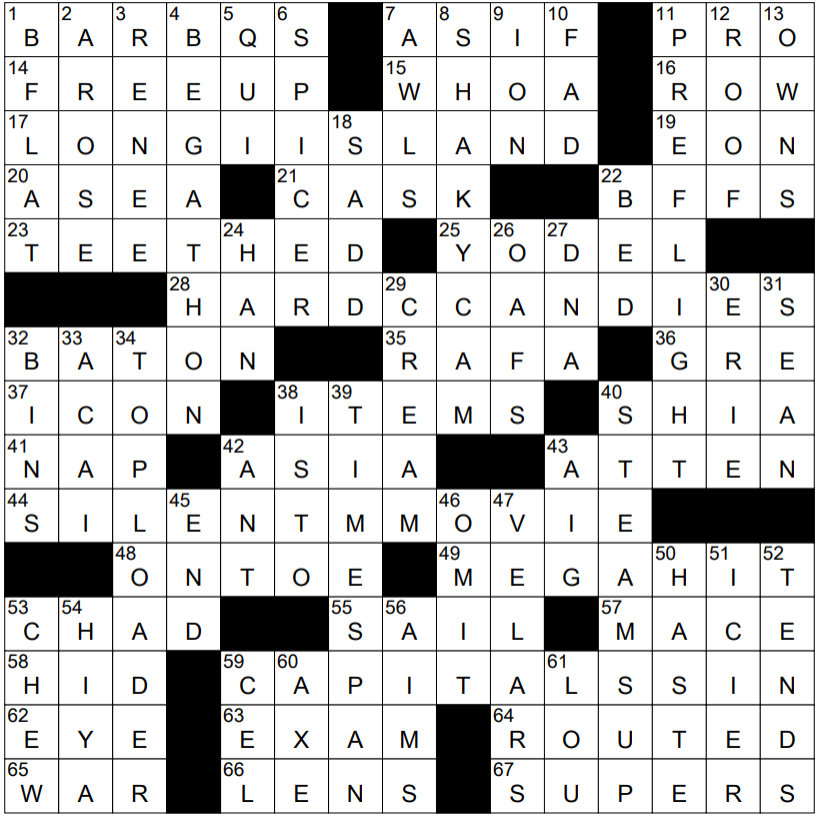 Themed answers are common two-word phrases with a repeat of the first letter of the second word. The first part of the answer describes a significant letter in the clue:

It is believed that our word “barbecue” (BBQ, Bar-B-Q) comes from the Taíno people of the Caribbean in whose language “barbacoa” means “sacred fire pit”.

The Isle of Wight is the largest island in England, and lies about five miles off the south coast of the country. For many centuries, the island was a kingdom in its own right. One popular tourist attraction on the Isle of Wight is Osborne House, a former royal residence that was built as a summer home for Queen Victoria, and that was designed by the queen’s consort Prince Albert. Queen Victoria died in Osborne House, in 1901.

The Nestlé Crunch candy bar was introduced way back in 1937.

40 One observing the holiday of Arba’een : SHIA

42 Home for the Himalayas : ASIA

“Sloth”, meaning “indolence, sluggishness”, comes from the Middle English word “slowe”, which is also the root of our contemporary word “slow”. The animal, the sloth, is so named as it exhibits slow-moving behavior.

1 What most clarinets are tuned to : B-FLAT

27 What makes you unique : DNA

Cream was a “supergroup” from Britain, meaning the band was composed of musicians from other successful groups. The band’s members were Eric Clapton (from the Yardbirds), and Jack Bruce and Ginger Baker (both from the Graham Bond Organisation).

Sean Spicer became White House press secretary when President Donald Trump assumed office on January 20th, 2017. Prior to taking his position with the Trump administration, Spicer had served as the communications director for the Republican National Committee since 2011. Spicer also appeared as a contestant on “Dancing with the Stars” in 2019. That was … interesting …

33 Source of a purple purée : ACAI