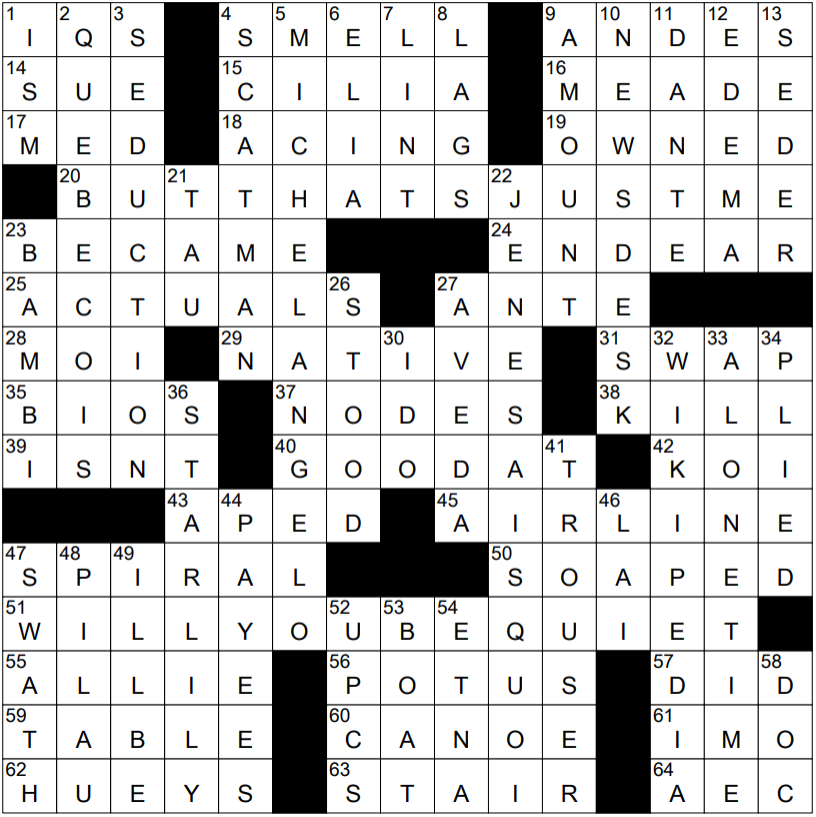 16 One leader of the Army of the Potomac : MEADE

George Meade was a career army officer with a depth of experience in civil and military operations even before the onset of the Civil War. During the war he rose to the level of Commander of the Army of the Potomac, and is best remembered for leading the Union forces that defeated General Robert E. Lee at Gettysburg in 1863.

27 Alternative to a blind, in poker : ANTE

The military helicopter known as the Bell UH-1 Iroquois is usually referred to as the “Huey”. It was first used by the US Army for medevac and utility operations in the mid-fifties. About 7,000 Hueys saw service in the Vietnam War. The US military phased out the Huey relatively recently, mainly replacing it with the UH-60 Black Hawk.

2 One represented by a blue-and-white flag with four fleurs-de-lis : QUEBECOIS

The flag of Quebec, called the Fleurdelisé, was adopted by the province on January 21, 1948. Quebec commemorates that day every January 21st, which is known as Flag Day.

Scatman Crothers was a jazz musician who is perhaps best remembered for playing Louie the Garbage Man on the seventies sitcom “Chico and the Man”.

5 Chief inspiration for the Mannerist style of art : MICHELANGELO

Both animals and plants can suffer from edema, which is a swelling caused by excessive accumulation of fluid.

21 Symbol for torque in mechanics : TAU

Horst Rechelbacher was traveling in India in 1970 when he was introduced to the Hindu science of longevity called Ayurveda, which inspired him to set up his own company of skin and hair care products that he called Aveda. The company opened its doors in 1978 and is based in Blaine, Minnesota.

Leucocrinum is a perennial plant that is native to the American West. It is a stemless plant, and grows to a height of maybe 4 inches. Because it has star-shaped flowers and long, narrow leaves, the leucocrinum is also known as the star lily.

French composer Francis Lai is known for his film scores. His most notable scores to American audiences are probably for 1970’s hit film “Love Story”, and the less memorable 1978 sequel “Oliver’s Story”.

A punt is a small boat with a flat bottom and a square-cut bow that is used in shallow water. Punts are propelled by a punter, who uses a pole to push against say a lakebed or the bank of a river. Punts differ from gondolas both structurally and in the method of propulsion, as a gondolier uses an oar.

54 Italian place whose name comes from a Greek word meaning “I burn” : ETNA