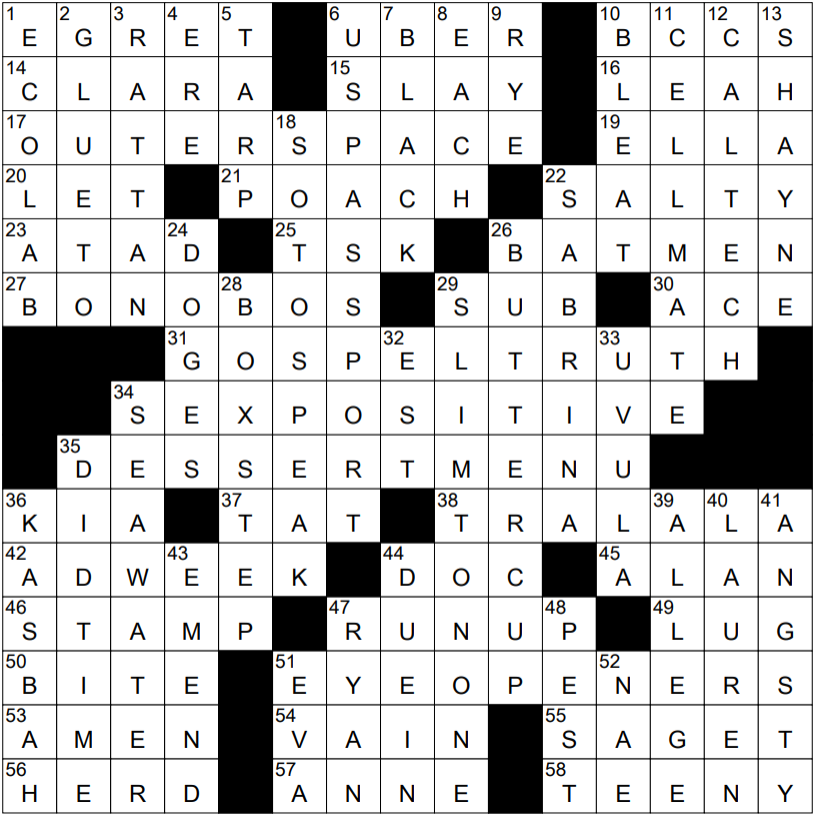 10 Includes surreptitiously, in a way : BCCS

Clara Schumann was a famous concert pianist, and the wife of composer Robert Schumann. Clara is known not only for her talent on the piano, but also for premiering works by Johannes Brahms, who was a dear friend of the Schumanns.

In the Torah, the Israelites are traced back to Jacob, grandson of Abraham and twin brother of Esau. Jacob had twelve sons through his concurrent wives Leah and Rachel, and his two concubines Bilhah and Zilpah. The sons became the ancestors of the Twelve Tribes of Israel. The sons were:

Our verb “to poach”, meaning “to cook in liquid”, comes from the Old French verb “pochier”, meaning “to put into a pocket”. The idea is that the yolk of a “poached” egg is “pocketed” in the egg white.

Eggs Benedict is a dish traditionally served at an American breakfast or brunch. It usually consists of a halved English muffin topped with ham and poached eggs, all smothered in Hollandaise sauce. The exact origin of the dish is apparently debated, but one story is that it is named for a Wall Street stockbroker called Lemuel Benedict. In 1894 in the Waldorf Hotel, Benedict ordered toast, poached eggs, crispy bacon and Hollandaise sauce as a cure for his hangover. The hotel’s maître d’ Oscar Tschirky was impressed by the dish and added the variant that we use today to the hotel’s menu, naming it for the gentleman who had first ordered it.

“Batman Begins” is a 2005 movie in the “Batman” franchise, in which Christian Bale plays the title character. This film tells the story of how Batman came to be, and deals with Bruce Wayne’s original fear of bats, the death of his parents, and the events leading to his adoption of the Batman persona.

“Batman Forever” is a 1995 superhero film, one in a string of movies featuring the comic book hero Batman. This one has Val Kilmer in the title role, with the two main villains played by Jim Carrey (the Riddler) and Tommy Lee Jones (Two-Face).

Christian Bale is an actor from Wales in the UK, although he is better known for his work on this side of the Atlantic. Bale’s big break in movies came in 1987 with the starring role in Spielberg’s “Empire of the Sun” at only 13 years of age. He has also played Batman three times, in “Batman Begins” (2005), “The Dark Knight” (2008) and “The Dark Knight Rises” (2012).

27 Close relatives of ours : BONOBOS

Kia Motors is the second-largest manufacturer of cars in South Korea, behind Hyundai (and Hyundai is a part owner in Kia now). Kia was founded in 1944 as a manufacturer of bicycle parts, and did indeed produce Korea’s first domestic bicycle. The company’s original name was Kyungsung Precision Industry, with the Kia name introduced in 1952.

When weaving with a loom, a shuttle is a tool that carries the thread across the weft yarn, back and forth so that the fabric “grows” in length.

Alan Watts was a British philosopher who lived much of his life in the San Francisco Bay Area. He was noted for popularizing Eastern philosophy in the West.

Bob Saget was a real enigma to me. He made a name for himself playing very sugary roles in TV shows like “Full House” and “America’s Funniest Home Videos”, and yet in the world of stand-up comedy Saget was known for very blue and raunchy routines.

Anne Burrell is co-host of the show “Worst Cooks in America” that airs on the Food Network. Here’s a Burrell quote:

I always use my “Holy Trinity” which is salt, olive oil and bacon. My motto is, ‘”bacon always makes it better”. I try to use bacon and pork products whenever it can.

William Shakespeare’s “Romeo and Juliet” doesn’t end well for the title characters. Juliet takes a potion as a ruse to fool her parents, to trick them into thinking she is dead. The potion puts her in a death-like coma for 24 hours, after which Juliet plans to awaken and run off with Romeo. Juliet sends a message to Romeo apprising him of the plan, but the message fails to arrive. Romeo hears of Juliet’s “death”, and grief-stricken he takes his own life by drinking poison. Juliet awakens from the coma, only to find her lover dead beside her. She picks up a dagger and commits suicide. Nobody lives happily ever after …

6 Book with an eagle on its cover : US PASSPORT

The New York city of Rye is the youngest in the state, having received its charter in 1942. Rye is home to the historic amusement park called Playland, which in 1987 was designated a National Historic Landmark. Opened in 1928, today’s Playland is actually owned and operated by Westchester County, making it one of the only government-operated amusement parks in the whole country.

The hit TV show “Sabrina the Teenage Witch” is based on a comic book series of the same name. The title character is played by actress Melissa Joan Hart. Sabrina lives with her two aunts, Hilda and Zelda, who are both 600 years of age. There’s also a cat called Salem, who has magical powers.

In dance, a box step is a step that creates a square or box pattern on the floor. The box step features in several ballroom dances including the rumba and waltz.

“Casbah” is the Arabic word for a “citadel”. “Casbah” (also “Kasbah”) usually refers to the citadel in the city of Algiers and the area surrounding it.

“To noodge” is a slang verb meaning “to nag”. It comes into English from the Yiddish word “nudyen” meaning “to bore, be tedious”.