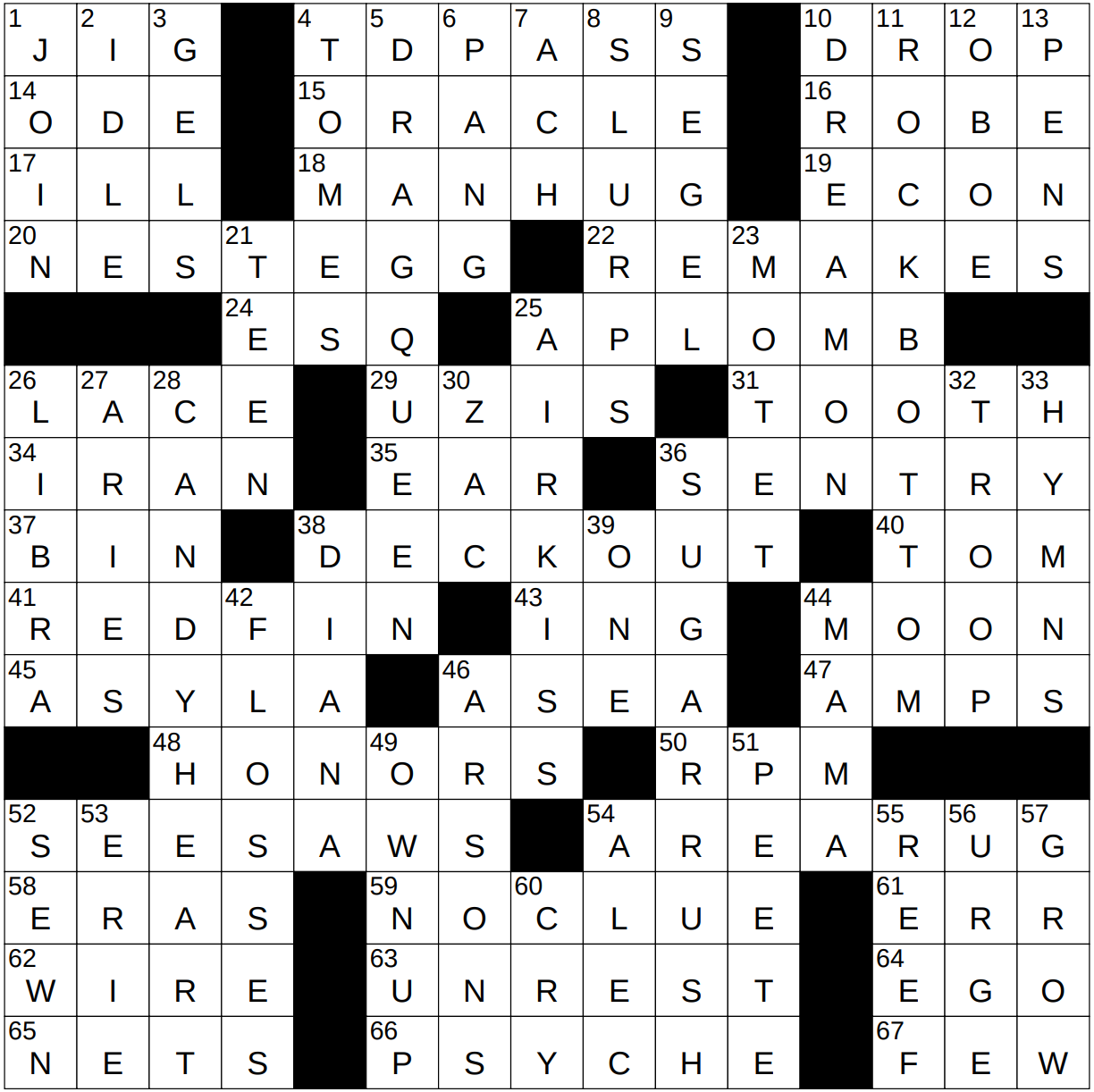 Themed answers are all in the down-direction. The word at the BOTTOM of each themed answer is a ROCK band:

1 Dance that might be accompanied by a fiddle : JIG

Tom Holland is an English actor whose big break came when he was cast in London’s West End production of “Billy Elliot the Musical”. Several years later, Holland landed the part of Spider-Man, starting with the 2016 film “Captain America: Civil War”. Tom’s father is Dominic Holland, who is quite a successful stand-up comedian in the UK.

44 Destination for an Apollo mission : MOON

66 Greek goddess of the soul : PSYCHE

In the myth of Cupid (aka “Eros”) and Psyche, the two title characters must overcome many obstacles to fulfill their love for each other. Overcome them they do, and the pair marry and enjoy immortal love.

9 Jason of “Freaks and Geeks” : SEGEL

“Freaks and Geeks” is a comedy-drama TV series aimed at teens that aired in 1999-2000. The executive producer for the show was Judd Apatow, and it launched the acting career of James Franco, Seth Rogen, Jason Segel and others.

It is common practice for a US president to use more than one pen to sign a bill into law. The pens are then distributed to key figures involved in bringing the law into effect. The first president to use multiple pens to sign a bill was Franklin Delano Roosevelt. The most pens used in one signing was by President Lyndon Johnson, who used 72 pens to sign the landmark Civil Rights Act of 1964. Not everyone sticks to the multiple-pen tradition though. President George W. Bush never used more than one pen at a time to sign a bill into law.

28 *Seasonal confection that may say “I Luv U” : CANDY HEART (giving “Heart”)

Heart is a rock band from Seattle, Washington that was founded in the seventies and is still going strong. The band has had a changing lineup, except for sisters Ann and Nancy Wilson.

Zac Efron is an actor from San Luis Obispo, California. Apparently, Efron is a heartthrob to “tweenyboppers”. His big break came with the hit Disney movie “High School Musical”.

33 Songs that might be accompanied by an organ : HYMNS

Charles, Prince of Wales married Lady Diana Spencer in 1981 at St. Paul’s Cathedral in London. The wedding was a huge television event, with about 750 million people tuning in worldwide. Although the event was billed as the start of a fairytale marriage, the couple separated in 1992 and divorced in 1996. Famously, Lady Diana died in a car crash in Paris the following year.

Dental floss has been around a long time, with the term “dental floss” being introduced in the early 1800s. Anyone fond of the writings of James Joyce (that wouldn’t be me!) might recall a character using dental floss in his famous novel “Ulysses” that was published between 1918 and 1920.

Calvin Peete was the most successful African-American golfer on the PGA tour before Tiger Woods hit the circuit. Peete played on the Ryder Cup teams of 1983 and 1985.

Lake Huron takes its name from the Huron Native-American people that lived by its shores. Early French explorers often called the lake “La Mer Douce”, which translates as “the freshwater sea”.