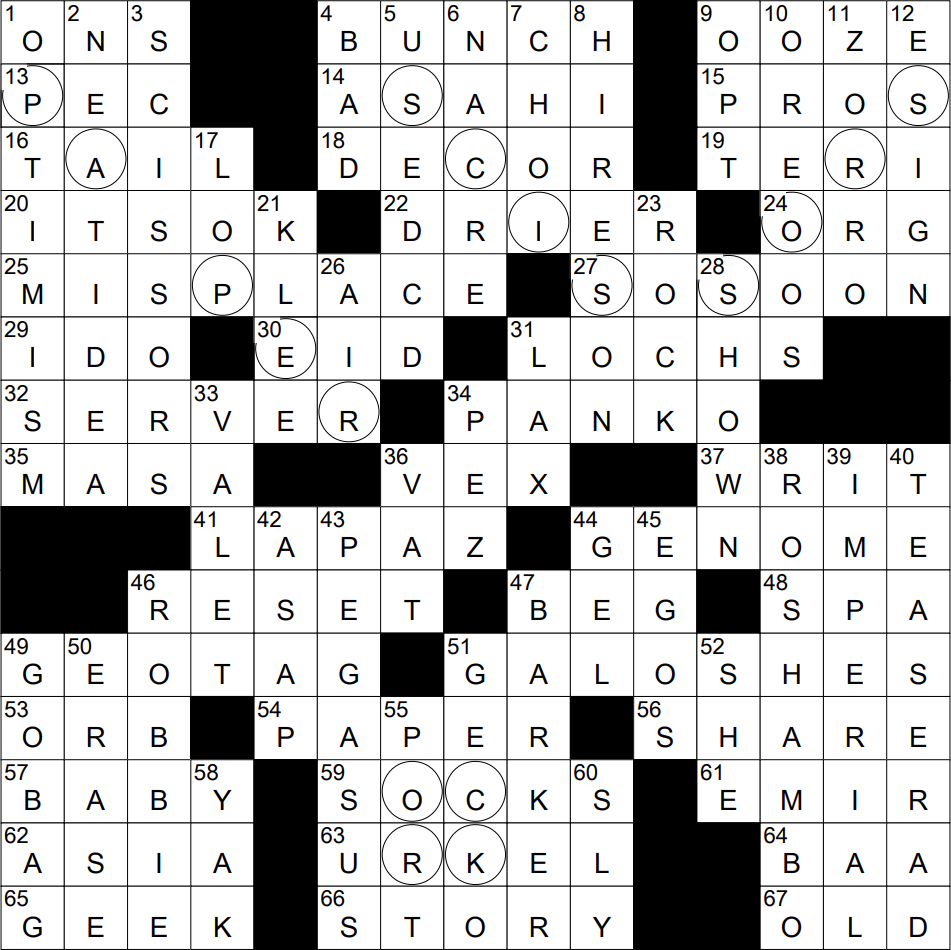 Themed clues and answers refer to the game of ROSHAMBO. In a very clever grid, we have SCISSORS cutting PAPER, ROCK breaking SCISSORS and PAPER covering ROCK:

“Masa” is the Spanish word for “dough”, with the term often used as an abbreviated form of “masa de maíz”. Masa is used to make tortillas and tamales, for example.

The administrative capital of Bolivia, La Paz, is officially named Nuestra Senora de La Paz (Our Lady of Peace). La Paz is the seat of the Bolivian government, even though the constitutional capital of the country is Sucre.

The genome is all the hereditary information needed to reproduce an organism, in other words, all of its chromosomes. When scientists unravel the human genome, it takes up an awful lot of computer storage space, and yet all of this information is in almost every cell in our bodies. Each and every cell “knows” how to make a whole human being.

Oreo O’s cereal was made by Post from 1998 to 2007. The pieces of cereal were basically O-shaped (like Cheerios) but chocolate-flavored, dark brown in color and with white sprinkles on them. Oh, and lots of sugar.

Artist Paul Klee was born in Switzerland, but studied art in Munich in Germany. We can see many of Klee’s works in the San Francisco Museum of Modern Art. If you get to Bern in Switzerland, even more of them can be seen at the Zentrum Paul Klee that was opened in 2005. Klee’s most celebrated work is his pointillist painting from 1932 called “Ad Parnassum”, which is owned by the Kunstmuseum, also located in Bern.

34 Candy once marketed as a smoking cessation aid : PEZ

38 One name for the game depicted in this puzzle : ROSHAMBO

39 Like Rome starting in the first century B.C. : IMPERIAL

Ancient Rome went through three distinct periods. From 753 to 509 BC, Rome was a kingdom founded by the legendary Romulus. From 509 to 27 BC, Rome was a republic. The Roman Republic started with the overthrow of the last monarch Lucius Tarquinius Superbus. He was replaced by two elected consuls who were advised by a senate. The Republic evolved over time, but came to an end when Octavian expanded his power and declared himself “First Citizen”. Octavian effectively became Rome’s first emperor, and took the name “Caesar Augustus”. The “Fall of the Western Roman Empire” took place in the 5th century, formally ending in 476 CE when the last emperor Romulus Augustus was deposed. The Eastern Roman Empire survived as the Byzantine Empire, which was centered on Constantinople.

45 Bigwigs may have big ones : EGOS

A bug-out bag (also “go-bag”) is a portable collection of items that one would grab when evacuating from a disaster. One well-accepted guideline is that a bug-out bag contains all that would be needed to survive for 72 hours. A related kit is a get-home bag that might be kept in one’s car or place of work. A get-home bag contains the items needed to get back home in the absence of public transportation. My wife and I put together bug-out bags recently, having moved into an area that is at high risk for wildfires …