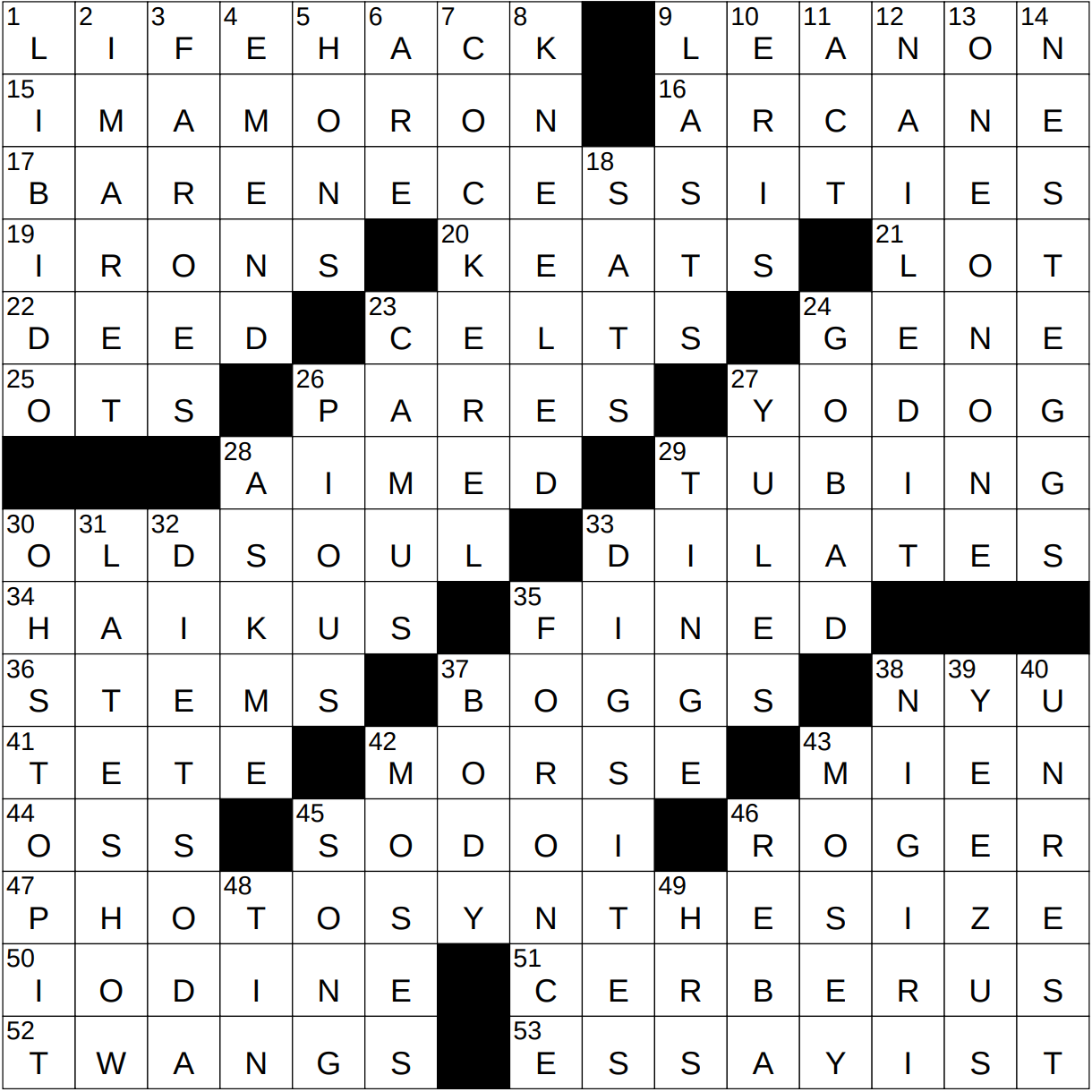 Constructed by: Daniel Sheremeta
Edited by: Will Shortz

20 Who wrote “The poetry of earth is never dead” : KEATS

“On the Grasshopper and Cricket” is an 1884 poem by John Keats:

The poetry of earth is never dead;
When all the birds are faint with the hot sun
And hide in cooling trees, a voice will run
From hedge to hedge about the new-mown mead.
That is the grasshopper’s, – he takes the lead
In summer luxury, – he has never done
With his delights; for, when tired out with fun,
He rests at ease beneath some pleasant weed.
The poetry of earth is ceasing never.
On a lone winter evening, when the frost
Has wrought a silence, from the stove there shrills
The cricket’s song, in warmth increasing ever,
And seems, to one in drowsiness half lost,
The grasshopper’s among some grassy hills.

The Boston Celtics NBA basketball team was founded just after WWII, in 1946. The Celtics won eight league championships in a row from 1958 to 1966. That’s the longest consecutive championship winning streak of any professional sports team in North America.

37 Wade in the Baseball Hall of Fame : BOGGS

Washington Square Park in New York City is largely surrounded by buildings belonging to New York University. The park’s most prominent feature in the park is the magnificent Washington Square Arch, a triumphal marble arch erected in 1892 to celebrate the centennial of George Washington’s inauguration as the nation’s first president in 1789.

41 Where to set une couronne : TETE

47 Soak up the sun, say : PHOTOSYNTHESIZE

51 Multiheaded dog guarding the gates of the underworld, in myth : CERBERUS

Cerberus is a dog with three heads that appears in both Greek and Roman mythology. Cerberus had the job of guarding the gates of Hades and preventing those who had crossed the River Styx from ever escaping. A sop is a piece of food that has been dipped in some liquid, as one might sop a piece of bread in soup. There is an idiomatic expression, “to give a sop to Cerberus”, which means “to give someone a bribe, pay someone off”. The idea is that if one could bribe Cerberus, give him a sop to eat, then he would let you pass and escape from Hades.

1 What an aphrodisiac boosts : LIBIDO

The word “aphrodisiac” is used for something that imbues sexual excitement. The word is derived from the “Aphrodite”, the Greek goddess of love and beauty.

The Faroe Islands (also “Faeroe Islands”) are a group of islands lying halfway between Scotland and Iceland. The Faroe Islands are part of the Kingdom of Denmark and were granted the power of self-governance in 1948.

Rudyard Kipling was a British poet and writer famous for his tales of the British Raj, the rule of the British Empire in India. Kipling was actually born in Bombay, but returned with his family to England when he was very young. After being educated in England, he returned to India and from there traveled the world. Kipling’s most famous works are the stories “The Jungle Book”, “Just So Stories”, “The Man Who Would Be King”, and the poems “Mandalay”, “Gunga Din” and “If-”.

Diet Pepsi Max was introduced to the soft drink market in 2007. The “Diet” was dropped from the name in 2009. In 2015, the name was further changed to “Pepsi Zero Sugar”.

Nigirizushi (“hand-pressed sushi”) is prepared by pressing a mound of rice into a ball and then draping seafood over the top.

43 Walk in a leisurely way : MOSEY

Reba McEntire is a country music singer and television actress. McEntire starred in her own sitcom “Reba” that aired on the WB and the CW cable channels from 2001 to 2007. She is sometimes referred to as “The Queen of Country”.