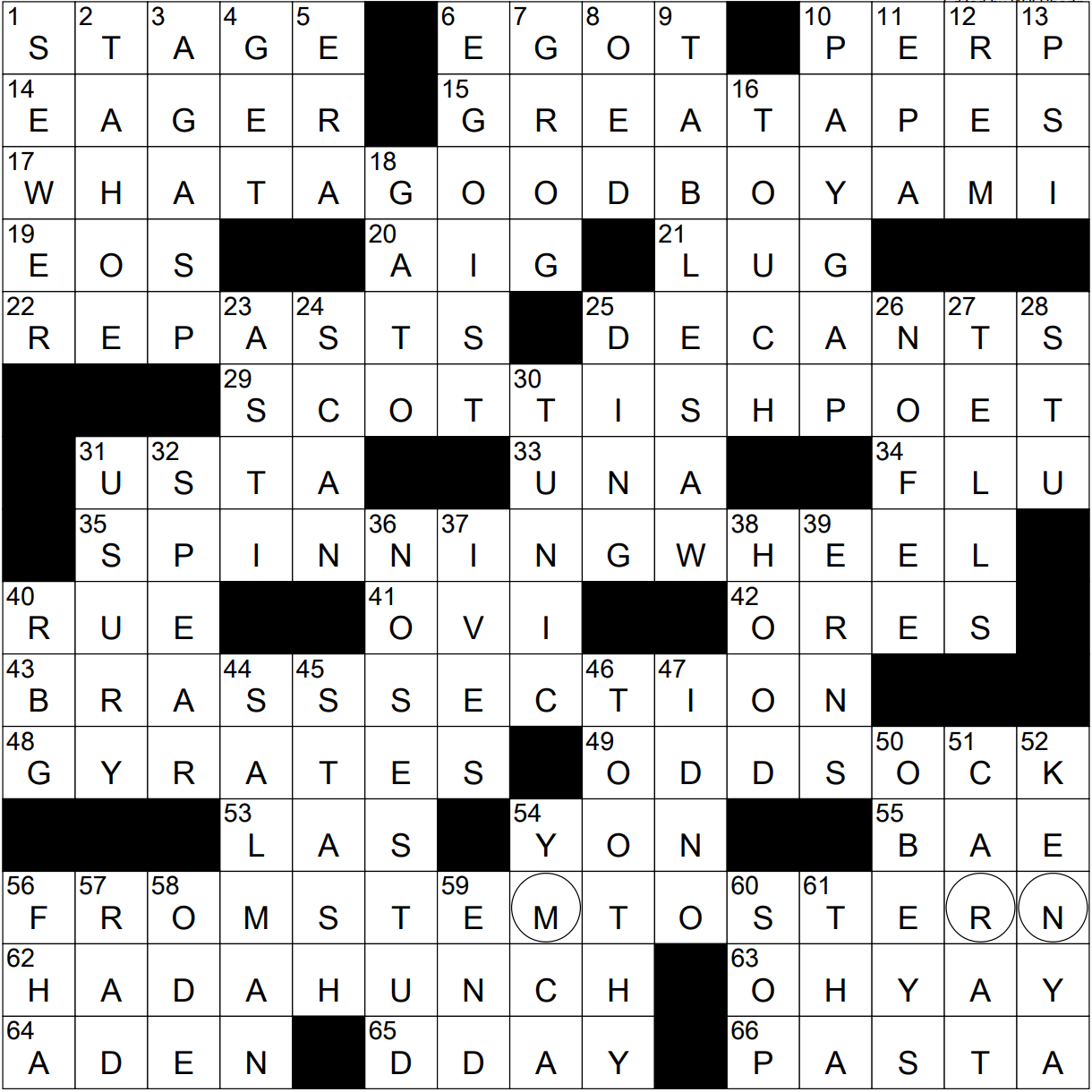 Constructed by: Ashish Vengsarkar & Narayan Venkatasubramanyan
Edited by: Will Shortz

Themed clues each have an intentional “typo” in that the lowercase “RN” is written as lowercase “M”. An example of such a ”typo” is STEM/stem coming from STERN/stern:

Aurora was the Roman goddess of the dawn, and was equivalent to the Greek goddess Eos. According to myth, Aurora renewed herself each and every morning and then flew across the sky to announce the rising of the sun.

The name of the province Québec comes from an Algonquin word “kebec” meaning “where the river narrows”. This refers to the area around Quebec City where the St. Lawrence River narrows as it flows through a gap lined by steep cliffs.

The dance called the Watusi was almost as popular as the twist in the early sixties. The Watusi took its name from the Batutsi tribe in Rwanda.

56 Thoroughly … or a hint for parsing some lowercase letters in four of this puzzle’s clues : FROM STEM TO STERN

The phrase “from stem to stern” means “entirely, from beginning to end”. It is nautical in origin. The stern is the back end of a sailing vessel, and the stem is an upright beam at the bow.

2 Lake in the Sierra Nevada : TAHOE

7 Subject of rationing in the old English navy : GROG

A table saw comprises a circular saw blade mounted vertically below a table. The edge of the blade protrudes through a slot in the table. Wood (usually) is supported by the table as it is cut by the blade.

Córdoba is a city in Andalusia in southern Spain that is sometimes referred to as “Cordova” in English. Córdoba might be the right destination for anyone seeking out a warm vacation spot in Spain. The city has the highest average summer temperatures in the whole of Europe.

Checks and checking accounts caused me some language trouble when I first came to the US. Back in Ireland (and the UK) we write “cheques” using funds from our “current” accounts.

38 Feature of many a Druid’s robe : HOOD

Salman of Saudi Arabia became the sovereign state’s king in 2015, following the death of his half-brother King Abdullah.

54 Facility often referred to by its first letter : YMCA

The Federal Housing Administration (FHA) was set up in 1934 to insure loans made by lenders for the building and purchasing of homes. The FHA was created in response to the bank failures of the Great Depression, with the intent of creating a more favorable environment for lending.

“Derrière” is a French term meaning “back part, rear”.