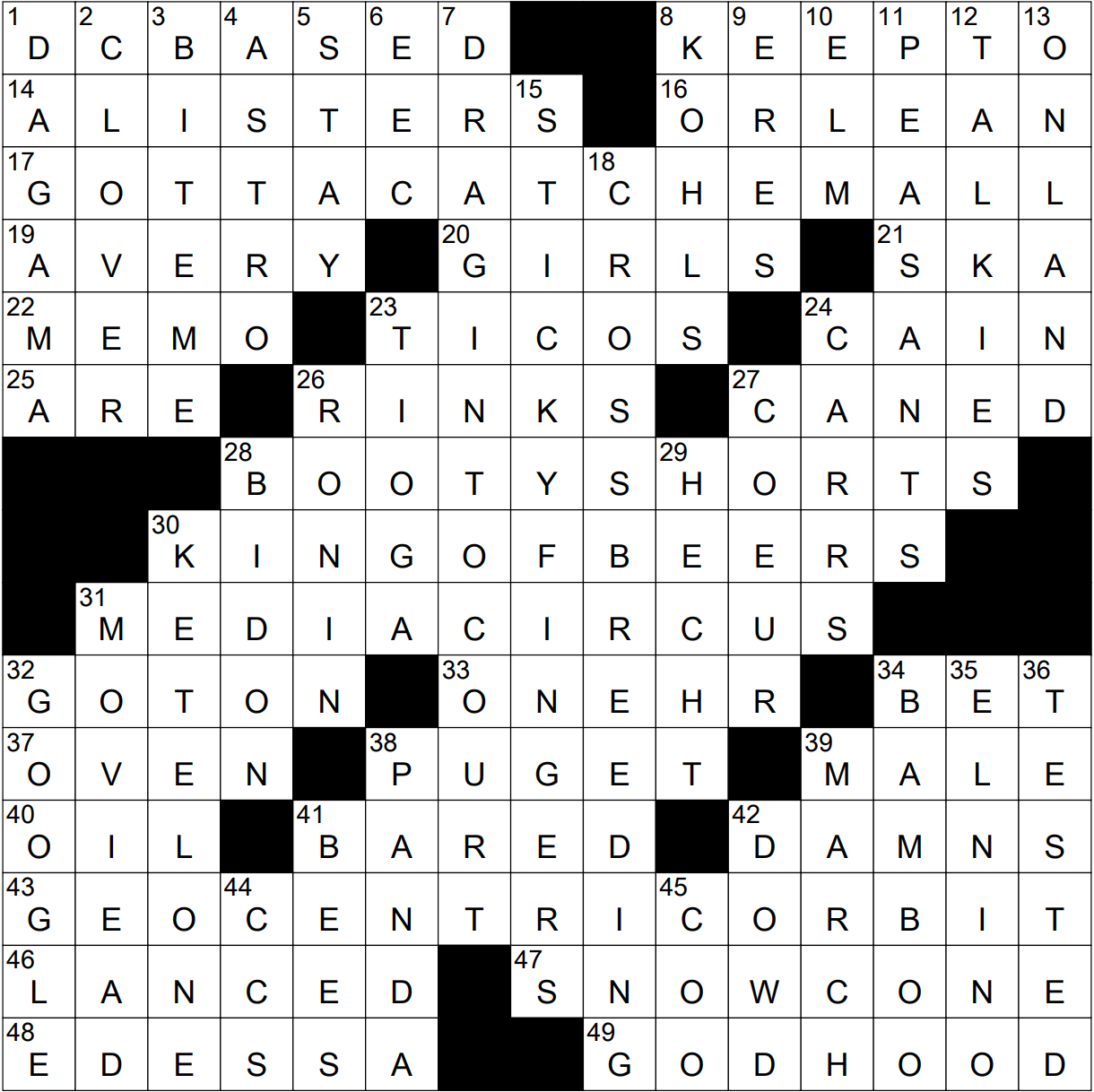 The District of Columbia (DC) was established by the Residence Act in 1790. Article One, Section 8 of the US constitution provides for the establishment of a district outside of the states, over which the federal government has authority. The constitution also specifies that the district cannot exceed an area of ten miles square.

“The Orchid Thief” is a 1998 book by journalist Susan Orlean about the poaching of the rare Ghost Orchid from a Florida State Park. The book was adapted into the 2002 film “Adaptation” starring Meryl Streep as the author Orlean.

19 Actor James of “The Fresh Prince of Bel-Air” : AVERY

On the nineties sitcom “The Fresh Prince of Bel-Air”, patriarch Philip Banks was played by James Avery.

24 Something that might be raised in a fight : CAIN

26 Locales for the Jets and the Sharks : RINKS

The San Jose Sharks hockey team play their home games at the HP Pavilion in San Jose, a venue that we locals call “the Shark Tank”.

The Wych elm is also known as the Scots elm. It is the most common species of elm found in Europe. The term “wych” comes from the Old English “wice” meaning “pliant, supple”. The word “wice” also gives rise to our word “wicker”.

38 Sound of the West Coast : PUGET

George Vancouver was a British explorer, and an officer in the Royal Navy. As well as exploring the coast of Australia, he is best known for his travels along the northwest coast of North America. The city of Vancouver was named in his honor. Traveling with him on his American voyage was a lieutenant Peter Puget, and in his honor, Vancouver named the waters south of the Tacoma Narrows “Puget’s Sound”. Nowadays, the name “Puget Sound” describes an area much greater than Vancouver had envisioned.

39 What stamens are, in botany : MALE

43 Travel around the world : GEOCENTRIC ORBIT

46 Stuck in the Middle Ages? : LANCED

European history is often divided in three major periods: classical antiquity and the modern period, with the Middle Ages in between. Specifically, the Middle Ages are said to have begun in 476 AD, when the last Roman Emperor was deposed by a Germanic chieftain. The end date for the Middle Ages is less specific, but is about 1500 AD. The list of events signaling the end of the Middle Ages includes Christopher Columbus’s first voyage to the New World (1492) and the Protestant Reformation (1517). The term “medieval” is used to describe something belonging to the Middle Ages.

The Greek city of Edessa is in the Central Macedonian region of the country. Edessa was the ancient capital of Macedon, and home to fabled King Midas.

Vasco da Gama left on his first voyage of discovery in 1497. da Gama journeyed around the Cape of Good Hope, the southernmost tip of Africa, and across the Indian Ocean making landfall in India. Landing in India, his fleet became the first expedition to sail directly from Europe to the sub-continent. Vasco da Gama was well known for acts of cruelty, especially on local inhabitants. One of his milder atrocities was inflicted on a priest whom he labeled as a spy. He had the priest’s lips and ears cut off, and sent him on his way after having a pair of dog’s ears sewn onto his head.

2 Good luck with that! : CLOVER

I haven’t seen “Ronin”, a 1998 action thriller about a group of ex-special forces and intelligence agents who collaborate to steal a mysterious suitcase. It stars Robert De Niro and Jean Reno, and sounds like my kind of film.

Robert De Niro is noted for his longtime and highly successful collaboration with the director Martin Scorsese, in such films as “Taxi Driver” (1976), “Raging Bull” (1980), “Goodfellas” (1990) and “Casino” (1995). De Niro is also noted for his commitment as a method actor. Famously, he gained a full 60 pounds in order to play Jake Lamotta in “Raging Bull”.

Ben Hecht had many jobs in Hollywood, but mainly is remembered as a screenwriter. Hecht earned the nickname “the Shakespeare of Hollywood” largely due to the large number of screen credits he received, getting writing credit for about seventy films. Included in the list of screenplays he worked on are “The Front Page”, “Some Like It Hot”, “Gone with the Wind” and “A Farewell to Arms”.

Ketel One is a brand of vodka from the Netherlands. The vodka is distilled from wheat in copper pot stills, and “ketel” is Dutch for “pot still, kettle”.

The grass known as bamboo is one of the fastest-growing plants in the world. Sadly, there are stories of growing bamboo being used as a device of torture. Supposedly, a victim can be staked out over bamboo shoots so that the shoots grow into the human flesh. Theoretically, bamboo can grow several inches in just three days.

41 Contests in which the competitors are eliminated one by one : BEES