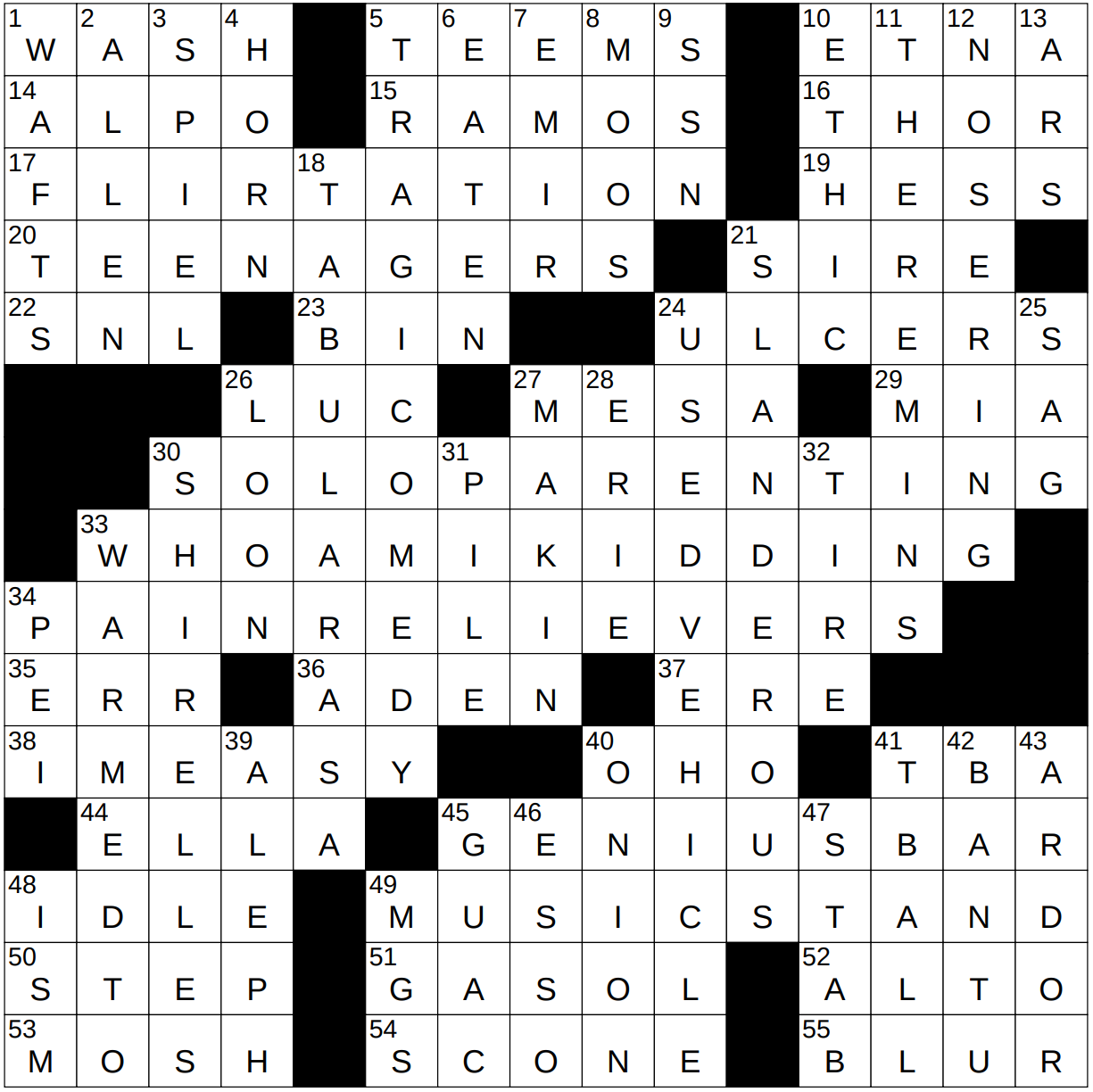 Constructed by: Erica Hsiung Wojcik
Edited by: Will Shortz

“To kibble” is to crush or grind coarsely. This verb evolved into the noun “kibble” meaning meat and/or grain that is ground into small pellets, especially when it is used for pet food.

16 He called Hulk a “friend from work,” in a Marvel movie : THOR

Thor Odinson is a superhero who was introduced to us by Marvel Comics in 1962. The character is based on the Norse god Thor, and comes complete with a magical hammer. Like so many comic book heroes it seems, Thor has made it to the big screen. Actor Chris Hemsworth played the role in the 2011 film “Thor” directed by the great Kenneth Branagh. Branagh must have needed the cash. Thor’s father Odin is played by Anthony Hopkins. He must have needed the cash too …

19 Victor ___, Nobel winner for the discovery of cosmic rays : HESS

Victor Hess was the physicist who discovered cosmic rays, winning him the Nobel Prize for Physics in 1936. Up until Hess did his experiments, it was believed that the ionizing radiation in the atmosphere originated from the Earth. Hess took measurements himself in a balloon at various altitudes (incurring some personal risk) and showed that the radiation did indeed decrease up to about 1km, but then started to increase again as the atmosphere thinned. This showed that we experience radiation at ground level that originates in outer space, a radiation later termed “cosmic rays”.

Cosmic rays aren’t actually rays at all. They are high energy particles that originate in outer space outside of our solar system. Cosmic rays interact with atoms in our atmosphere creating secondary particles that can reach the Earth’s surface.

The city of Mesa, Arizona is in effect a suburb of Phoenix. The original settlement of non-Native Americans was founded by Daniel Webster Jones who led a Mormon group from St. George, Utah. The settlement was first called Jonesville, then Fort Utah and eventually Lehi. A second group of Mormons arrived and formed a settlement on top of a nearby mesa. It was this use of a mesa that eventually gave the city its current name.

“O patria mia” is an aria from Verdi’s “Aida”. The aria is sung by the title character, with “O patria mia” translating as “O, my homeland”.

Sonny Bono was a recording artist who later moved into the world of politics. As a musical entertainer, Bono was most famous for his recordings as a duo with Cher, who later became his second wife. The couple divorced, but continued to work together. Bono went into politics, first as the mayor of Palm Springs, California and later as a representative for a California district in the US House of Representatives. Sadly, Bono was killed in a skiing accident in 1998. Coincidently, Michael Kennedy (son of Robert F. Kennedy) had died in a similar skiing accident just one week earlier. The epitaph on Bono’s gravestone reads “And the Beat Goes On”, a reference to the 1967 Sonny & Cher hit “The Beat Goes On”, which was written by Sonny.

2 Klein who once managed the Beatles and Rolling Stones : ALLEN

Allen Klein was a big player in the music industry starting in the sixties. He managed the Beatles as well as the Rolling Stones, both groups at the same time. Klein was a controversial figure though, eventually spending a couple of months in jail for making false statements on a tax return.