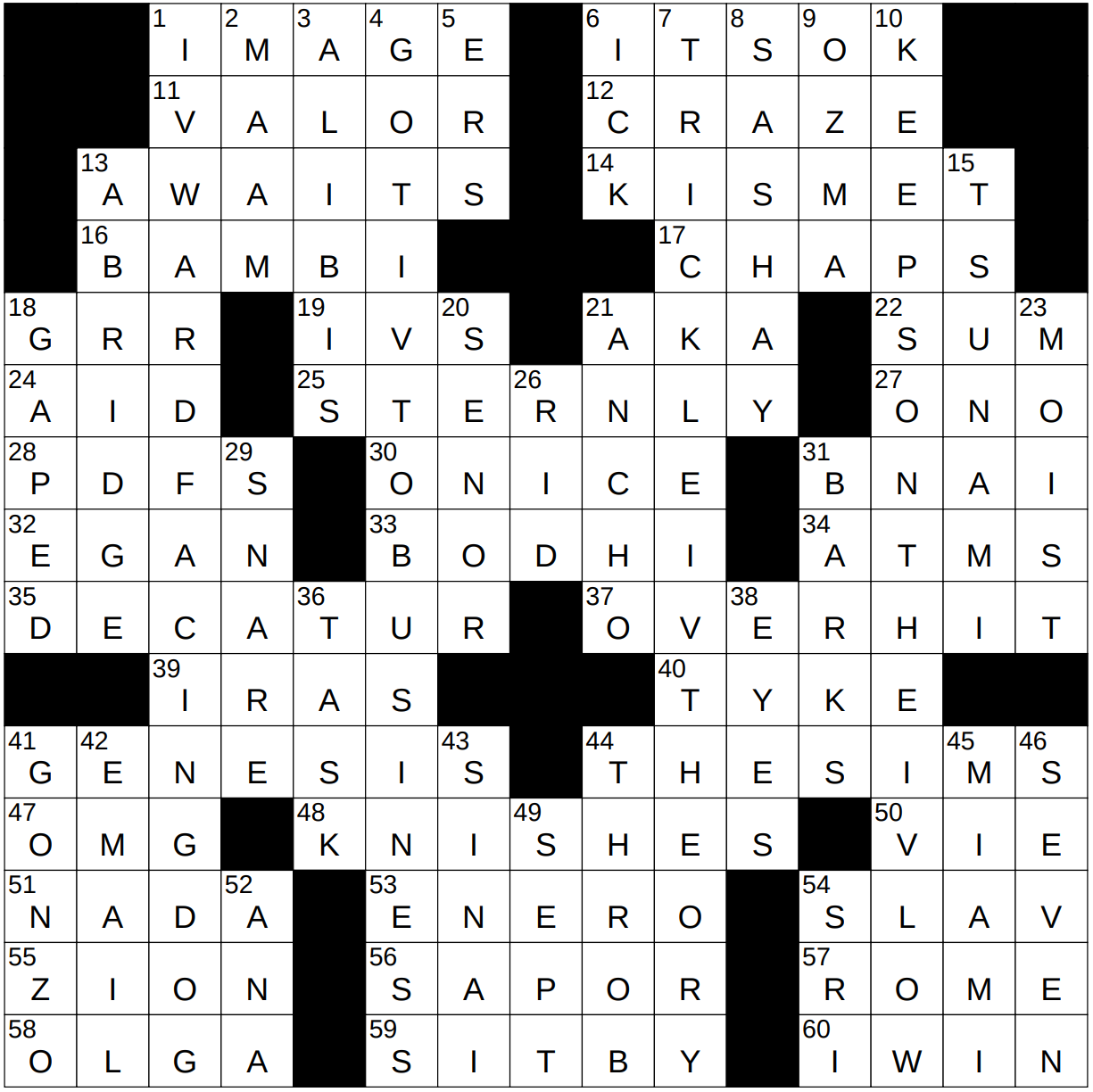 Today’s Theme (according to Bill): Down Arrow

The letters IV represent the word DOWN in themed down-answers, as together they resemble a DOWN-arrow:

Wordle is a web-based word game that a Welsh software engineer developed to play with his partner during the COVID pandemic. The name “Wordle” is a play on the engineer’s own name: Josh Wardle. Wardle published the game on its own website in 2021, primarily for the use of Wardle’s family. One month later, the game had 90 players, and a month later 300,000 players. A week later, the number of daily players had grown to two million! The New York Times purchased Wordle in 2022 “for an undisclosed price in the low-seven figures”.

21 Letters before an alternate name : AKA

35 Illinois city that was the first home of the Chicago Bears : DECATUR

The city of Decatur in Central Illinois is known as “the Soybean Capital of the World”. The city’s most famous resident was Abraham Lincoln, and it was in Decatur that the future US President gave his first political speech.

37 Send beyond the baseline of a tennis court, say : OVERHIT

Our modern sport of tennis evolved from the much older racquet sport known as real tennis. Originally just called “tennis”, the older game was labeled “real tennis” when the modern version began to hold sway. Real tennis is played in a closed court, with the ball frequently bounced off the walls.

39 Plans for some seniors, in brief : IRAS

44 Video game with a “rosebud” cheat code that grants free money : THE SIMS

Our word “palace” ultimately comes from the name of Rome’s Palatine Hill, “Mons Palatinus” in Latin. The original “palace” was the house of Augustus Caesar, which stood on the Palatine Hill.

The economic policies promoted by the Reagan administration in the eighties came to be known as “Reaganomics”. The policy had four main elements:

L. Frank Baum wrote a whole series of books about the Land of Oz. Princess Ozma appears in all of them except the one that’s most famous, namely “The Wonderful Wizard of Oz”.

10 Handles discreetly : KEEPS ON THE DOWN LOW

The words “abridge” and “abbreviate” both come from the same Latin root “abbreviare”, meaning to “make short”.

41 Muppet whose self-identified species is “Whatever” : GONZO

Gonzo the Great is a character in “The Muppets”. Gonzo was actually given top billing in the 1999 movie “Muppets from Space”.

46 Nitrogen, on the periodic table : SEVEN

The chemical element nitrogen (atomic number 7) was first isolated and discovered by Scottish physician and chemist Daniel Rutherford in 1772. Rutherford did not identify nitrogen as an element, but isolated it as a gaseous component of air that did not support combustion, and that he called “noxious air”.

Sanskrit is an Indo-Aryan language and one of the 22 scheduled languages of India. It has a rich tradition and is the language in which many historical and religious texts are written. There aren’t many speakers of the language today although efforts are underway to revive spoken Sanskrit.