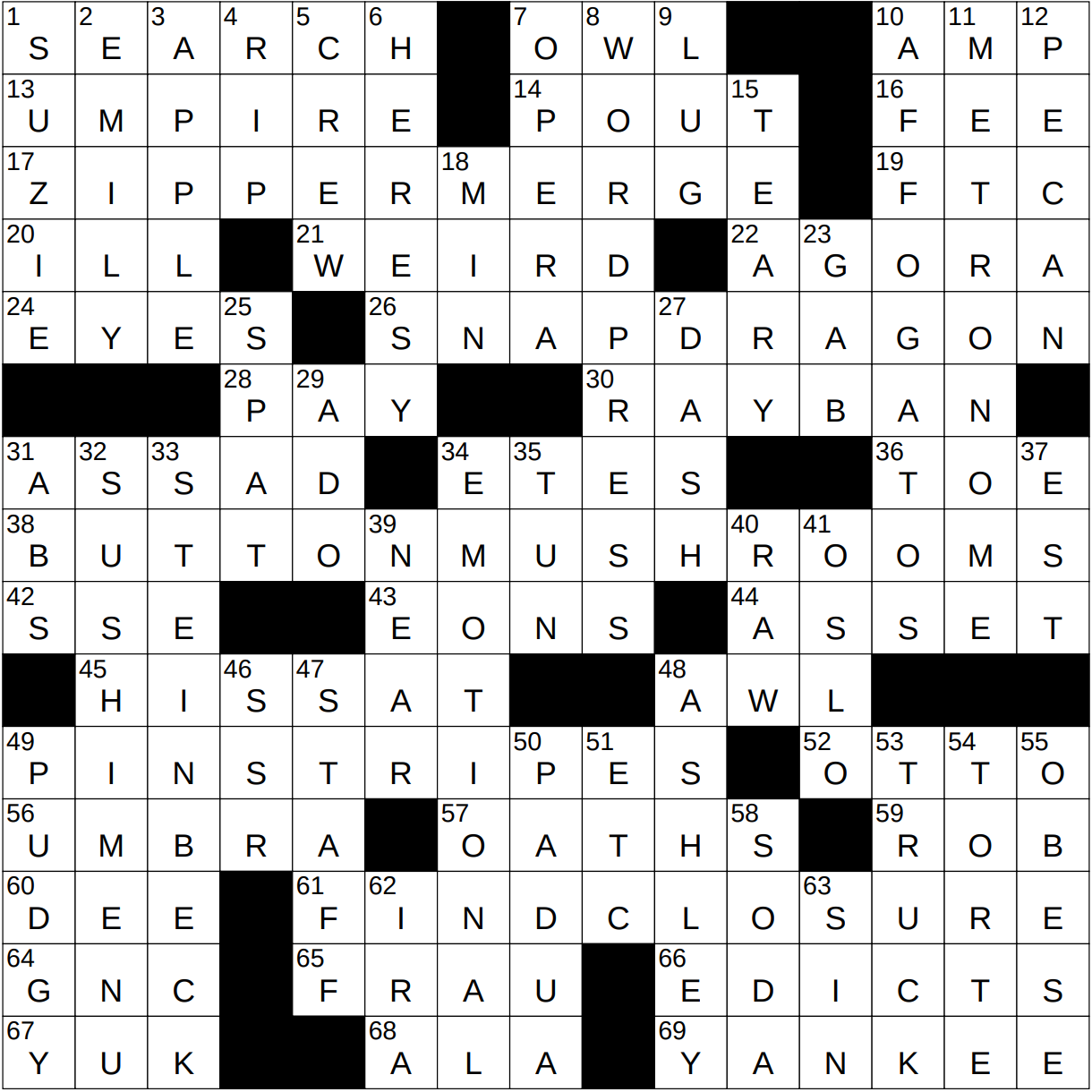 We FIND a type of CLOSURE used in clothing at the start of each themed answer:

“Bizarre” is a French word, one with the same meaning in French as English. However, back in the 16th century, “bizarre” used to mean “handsome, brave” in French. So that’s what my wife means when she refers to me as “bizarre” …?

26 *Garden plant that opens and shuts its “mouth” when squeezed : SNAPDRAGON

Snapdragons are so called because the plant’s flower is said to resemble that of a dragon. The snapdragon genus is “antirrhinum”, which is derived from the Greek for “like a nose”.

“To pony up” means “to pay”. Apparently, the term originated as a slang use of the Latin “legem pone” that was once used for “money”. “Legem Pone” was the title of the Psalm that was read out on March 25 each year, and March 25 was the first payday of the year in days gone by.

Ray-Ban sunglasses were introduced in 1937 for the US Army Air Corps. The Ray-Ban Aviator model of glasses became very popular with the pilots, and apparently with General Douglas MacArthur. MacArthur was wearing a pair when he was photographed “returning” to the Philippines in WWII.

Dr. Bashar al-Assad is the son of the former President Hafez al-Assad, whom he replaced as President of the Syrian Arab Republic in 2001. President Bashar al-Assad is a medical doctor, and speaks fluent English and conversational French. Assad was studying ophthalmology in London when he met his wife, who is an Englishwoman by birth.

49 *Design on some baseball uniforms : PINSTRIPES

The Chicago Cubs was the first professional baseball team to incorporate pinstripes into the design of the players’ uniforms.

Otto Mann drives the school bus on the TV show “The Simpsons”. He is a Germanic character voiced by Harry Shearer, and his name is a play on “Ottoman Empire”. Whenever Bart sees him, he greets Otto with the words “Otto, man!”

56 Darkest part of a shadow : UMBRA

69 Major-leaguer who wears 49-Across at home : YANKEE
(49a *Design on some baseball uniforms : PINSTRIPES)

There is an urban legend that the New York Yankees introduced uniforms with pinstripes to make Babe Ruth look slimmer. Not so …

5 Gaffer, best boy and others : CREW

7 Work from Bellini or Rossini : OPERA

A metronome is any device that produces a regular beat. The metronome was invented in 1815 by Johann Maelzel, who intended it to be an instrument for the use of musicians.

Spats are footwear accessories that cover the ankle and instep. Spats were primarily worn by men, and originally had the purpose of protecting shoes and socks from mud or rain. Eventually, spats became a feature in stylish dress. The term “spats” is a contraction of “spatterdashes”.

46 Azerbaijan or Lithuania, once: Abbr. : SSR

Azerbaijan is a former Soviet Republic lying on the Caspian Sea just northeast of Iran. The Azerbaijan Democratic Republic was established in 1918 and became the Muslim world’s first democratic and secular state. It didn’t last long though, as two years later it was absorbed into the Soviet Union.

A Linzer Torte is a torte with a lattice design on the top of the pastry. The torte is named for the Austrian city of Linz.