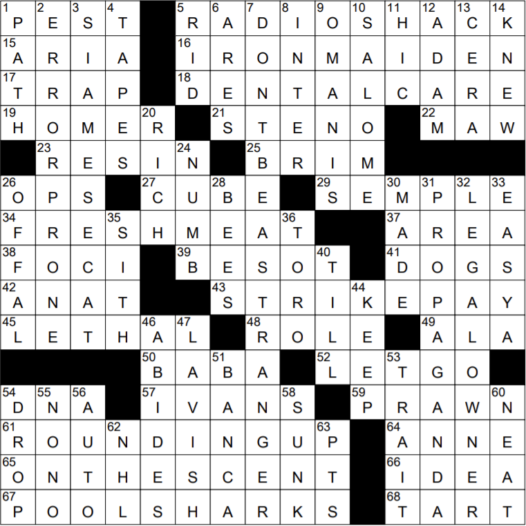 The store that came to be known as RadioShack was founded as “Radio Shack” in 1921 and focused on serving the amateur radio market. The name was chosen as a “radio shack” was the wooden structure that housed the radio equipment on a ship, and a ham radio station was also known as a “radio shack”. Radio Shack was losing money in the sixties and was bought for a song by Charles Tandy who merged it with his leather goods stores under the name Tandy Radio Shack & Leather (can you believe it?). Tandy eventually dropped all lines bar the electronic items and changed the name “back” to the trendy “RadioShack” in 2000.

Iron Maiden is a heavy metal band from London that has been around since 1975. Heavy metal – not really my cup of tea …

A snapback is a baseball hat with a flat brim and a snap closure at the back. The snap allows for the hat to be adjusted in size.

Aimee Semple McPherson was a pioneer in the arena of evangelism, being one of the first to use radio to get across her message. In 1926, McPherson disappeared under mysterious circumstances at Venice Beach, California. About a month later, Aimee’s mother received a ransom note, which she says that she tossed away thinking that her daughter had drowned. A few days later, McPherson was found wandering around in a Mexican town across the border from Douglas, Arizona, claiming that she had been kidnapped and had escaped. There were many discrepancies in her story though, and five witnesses claimed to have seen her in a seaside cottage in Carmel, California while she was “gone”. No one seems to know for sure what exactly happened during that month.

The American Library Association promotes libraries not only in the US, but internationally. The organization was founded in 1876, making it the oldest library association in the world.

The terms “prawn” and “shrimp” are often used interchangeably on menus. Over in the UK, the term “prawn” is most common, while “shrimp” is seen more often here in North America. Sometimes there is a differentiation from a food standpoint, with “prawn” being used for larger species and “shrimp” for smaller species. As a result, “jumbo prawns” seems to be an acceptable descriptor for a dish, whereas “jumbo shrimp” seems to be an oxymoron.

Anne Archer is an American actress, a native of Los Angeles and the daughter of actors Marjorie Lord (co-star in “The Danny Thomas Show”) and John Archer. Anne’s most famous role was in 1987’s “Fatal Attraction” in which she played the wronged wife. She also played the wife of Jack Ryan’s character in “Patriot Games” and “Clear and Present Danger”.

The exact origins of the Siamese cat aren’t very clear, but it is believed to be from Southeast Asia. The Siamese takes its name from the sacred temple cats of Thailand (a nation once called “Siam”).

“Get Fuzzy” is a cartoon strip by Darby Conley that has been running since 1999. The strip’s main characters are an advertising executive called Rob Wilco and his pets Satchel Pooch and Bucky Katt.

9 Subjects of a certain sultanate : OMANIS

Qaboos bin Said al Said is the current Sultan of Oman, who came to power in a coup in 1970 by deposing his own father. Qaboos has no children, and no agreed heir. His current instructions are for the royal family to agree on a successor after his death. Qaboos has also specified that should the royal not be able to agree on a successor, then the country’s Defense Council will make the decision, choosing between two names that the Sultan placed in a sealed envelope to be opened after his passing.

10 Strauss work with the “Dance of the Seven Veils” : SALOME

In the New Testament, Salome was a dancer and a seductress. She was the stepdaughter of Herod and when she danced for him on his birthday, her mother demanded as a reward the execution of John the Baptist. Salome is not actually named in the account in the gospels, and historians rely on other sources to determine that she was indeed “Salome”. Famously, the seductive dance that she performed is said to be the Dance of the Seven Veils. The dance isn’t named in the Biblical account, and is an elaboration that developed in later Christian mythology.

Hi-C orange drink was created in 1946 and introduced to the market in 1948, initially in the south of the country. The name “Hi-C” was chosen to emphasize the high vitamin C content in the drink, as it contained added ascorbic acid (vitamin C).

An angel investor is one who provides capital very early in a business’s life cycle. The term “angel” is borrowed from Broadway, where angels are wealthy people who provide funds to stage theatrical productions.

Angel food cake is an American creation, with the name being a reference to the sponge’s lightness, as if it is “food of angels”. The chocolate butter cake called Devil’s food cake came along later, and is considered to be a counterpart to the more angelic variety.

31 The art of politics? : PROPAGANDA

In 1622, Pope Gregory XV established a committee of cardinals charged with “propagating the faith”, with responsibility for missions aimed at growing the Roman Catholic Church. The committee was called “Congregation de Propaganda Fide”, using the Latin word “propaganda”, the feminine gerund of the verb “propagare” meaning “to propagate”. In the 18th century, the word “propaganda” from the committee’s name came to describe dissemination of a doctrine in general. During WWII, the term developed a negative connotation, which exists to this day.

In a sushi restaurant, the dish called “toro” is the fatty tissue from the belly of the bluefin tuna.

51 Where to get money in Milano : BANCA

In a “banca” (bank) in Italy, the currency of favor was the lira, and now it’s the euro.

The Senators are the NHL hockey team based in Ottawa, Canada. The current team, founded in the 1992-93 season, is the second NHL team in the city to use the name “Senators”. The original team was founded in 1917, and had a very successful run until the league expanded into the US in the late twenties. The cost of operating in what became the smallest NHL city eventually drove the Senators to St. Louis where they played for a year as the Eagles before finally folding.