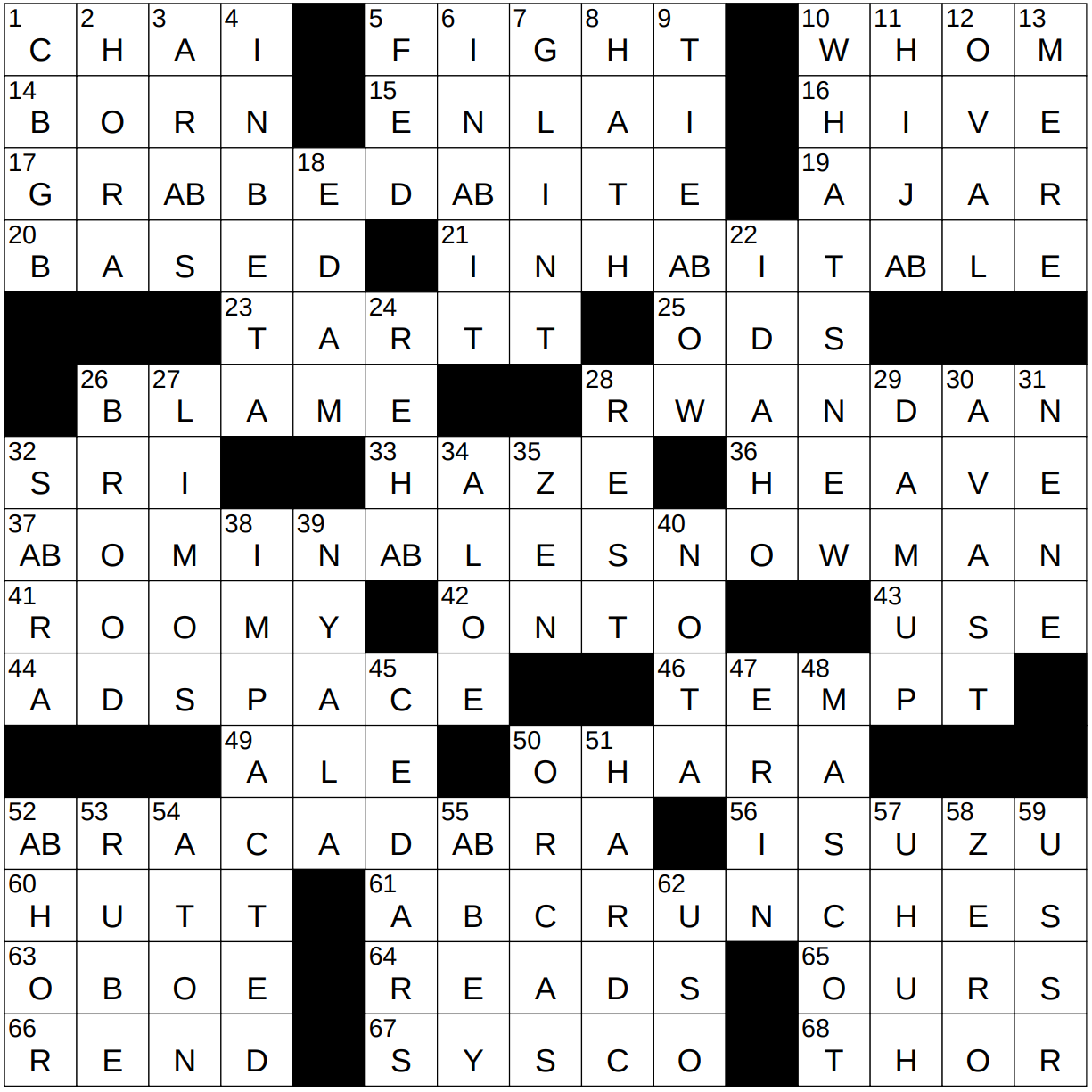 Constructed by: Jared Goudsmit
Edited by: Will Shortz

We have a rebus puzzle today, with the letters “AB” CRUNCHED together in several squares:

Novelist Donna Tartt won a Pulitzer for her 2013 novel “The Goldfinch”. That same novel was adapted into a 2019 film, which bombed at the box office.

26 Make a scapegoat of : BLAME

Kigali is the capital of the African nation of Rwanda, and is located in the center of the country. That location led to the city being picked as the capital in 1962, over the traditional capital of Nyanza. The choice was made on the occasion of Rwanda’s independence from Belgium. Kigali was the center of the Rwandan Genocide of 1994, in which half a million to one million Rwandans were killed. That was perhaps 20% of the country’s total population wiped out in the space of four months.

Something described as “capacious” is spacious, capable of holding much.

“Beetlejuice” is a 1988 comedy-horror film directed by Tim Burton and starring Michael Keaton in the title role. Beetlejuice is an underworld character who tries to scare away the new inhabitants of a house that is haunted by the ghosts of a deceased couple (played by Alec Baldwin and Geena Davis).

Isuzu is a Japanese auto manufacturer that is very successful in the medium and heavy truck market in particular. You’ll be seeing fewer and fewer Isuzu passenger cars on American roads though, as the company exited the US passenger car market in 2008.

63 Relative of a cor anglais : OBOE

It’s hard to drive down any highway in the US without coming across a Sysco truck. It really is a huge company, the largest food service enterprise in the country. “Sysco” is an abbreviation for Systems and Services Company.

1 N.Y.C. venue for the Ramones and the Cramps : CBGB

The music club known as CBGB opened in 1973 intending to feature country, bluegrass and blues music (hence the name “CBGB”, Country, BlueGrass and Blues). The club developed an association in the eighties with New York’s underground hardcore punk music.

4 Still being debugged : IN BETA

The set of five horizontal lines and four spaces used in Western musical notation can be called a staff or stave. Either way, the plural form is “staves”.

The head of the word “cool” is a hard letter C.

53 Cartoonist Goldberg who drew contraptions like the “Self-Operating Napkin” : RUBE