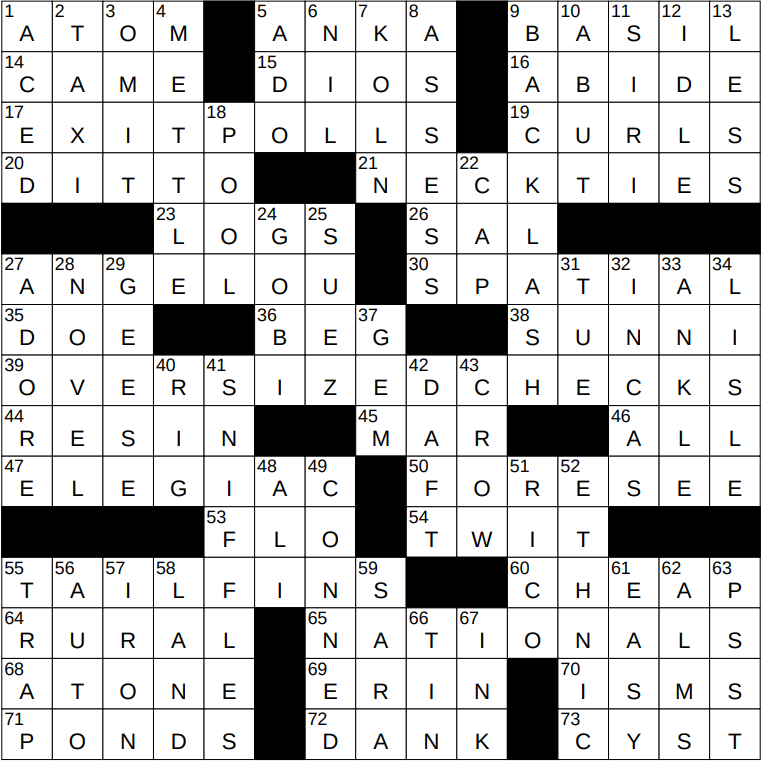 Themed answers each end with a homophone of specific NATIONALS:

5 Singer Paul with a star on Canada’s Walk of Fame : ANKA

Canada’s Walk of Fame acknowledges the accomplishments of successful Canadians. It was established in 1998 in Toronto. The “stars” have a clever design that incorporates five maple leaves.

The Thai people are an ethnic group found mainly in Central and Southern Thailand. That said, the term “Thai people” is also used to describe all people from Thailand.

A necktie can be tied using a Windsor knot, which results in a wide but symmetrical triangular knot. The knot was popularized by British King Edward VIII, who was known as the Duke of Windsor after he abdicated. On the very rare occasion that I wear a tie these days, I usually employ a half-Windsor knot.

A spatial relation defines how an object is related in space to another object, i.e. where the two objects are positioned relative to each other.

According to Dante’s “Divine Comedy”, the inscription at the entrance to hell is “Abandon hope, all ye who enter here”.

Tailfins started appearing on cars in the late forties, and became popular in the fifties. The first tailfins were introduced on the 1948 Cadillac by GM designer Harley Earl. Earl got his inspiration from WWII fighter aircraft.

“Mettle” is such a lovely word. It means “courage, fortitude, spirit”. “Mettle” is simply a variant spelling of the word “metal”.

“Ballyhoo”, meaning “hype, publicity”, was originally circus slang dating back to the early 1900s. No one really knows where the term comes from, but I can tell you there is a village in Co. Cork in Ireland called Ballyhooly!

Cologne is the fourth largest city in Germany, and is known as “Köln” in German.

The Suez Canal connects the Mediterranean Sea with the Red Sea. The canal took ten years to construct, and opened in 1869. The northern terminus of the waterway is Port Said, and the southern is Port Tewfik in the city of Suez, which gives the canal its name.

29 Plural that makes one wonder why there aren’t any meese : GEESE

The name “Tuesday” comes from an Old English word that translates as “Tiw’s Day”. In turn, “Tiw” was the Old English name for the Norse god “Týr”. Týr was the Norse god of single combat, victory and heroic glory.

Ravens and crows are very similar species, and it can be difficult to tell them apart. Ravens are a little larger and often travel in pairs, whereas crows are a little smaller and are usually seen in larger groups. Crows make a cawing sound, while the raven’s call is more like a croak.

67 Squirt from an octopus : INK