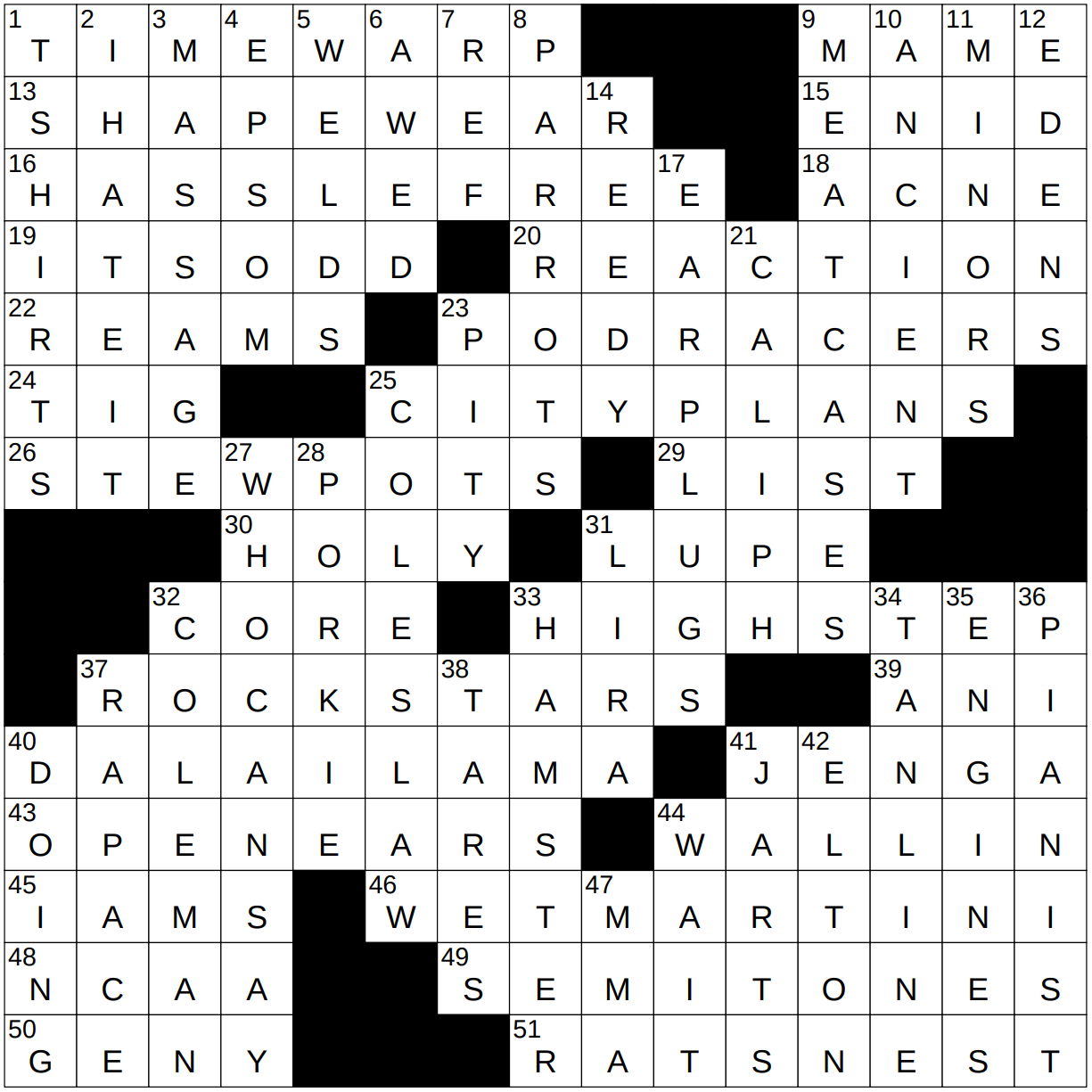 A time warp is a hypothetical concept much used in science fiction. The idea is that a distortion in the flow of time might cause events to move from one time period to another.

9 Classic musical with the song “If He Walked Into My Life” : MAME

23 Vehicles in “The Phantom Menace” : PODRACERS

An olla is a traditional clay pot used for the making of stews. “Olla” was the Latin word used in ancient Rome to describe a similar type of pot.

30 Ironic word before an expletive : HOLY …

Batman’s partner Robin is known for his very creative “Holy …!” exclamations. Here are few worth repeating from the original “Batman” TV show:

32 Planks can strengthen it : CORE

The plank is an isometric exercise that strengthens the abdominals, as well as the back and shoulder muscles. There are variations of the plank, such as the side plank and the reverse plank.

The tropical bird called the ani is related to the cuckoo. Cuckoos go around robbing other birds’ best, but anis don’t.

40 Writer of the autobiography “Freedom in Exile” : DALAI LAMA

Jenga is a relatively simple but entertaining game, one in which one stacks wooden blocks as high as possible until the resulting tower collapses. “Jenga” is the Swahili word for “to build”

Iams dog food was introduced by animal nutritionist Paul Iams. He felt that household pets were suffering somewhat by being fed a diet of table scraps, so he developed dry dog food that he felt was more nutritious and suitable for pet dogs. He founded the Iams company, now part of Procter & Gamble, in 1946.

49 Intervals represented by adjacent frets on a guitar : SEMITONES

50 Millennials, by another name : GEN-Y

4 Where The Oaks is run : EPSOM

7 Authority in the field, informally : REF

8 They don’t know what they’re talking about : PARROTS

21 Ruler chosen through the Islamic process of shura : CALIPH

25 One side of a fast-food restaurant : COLESLAW

36 One sitting on the bench, maybe : PIANIST

Elton Brand is a professional basketball player who played most of his career with the LA Clippers (from 2001 to 2008).

47 Sport with hits and strikes, for short : MMA