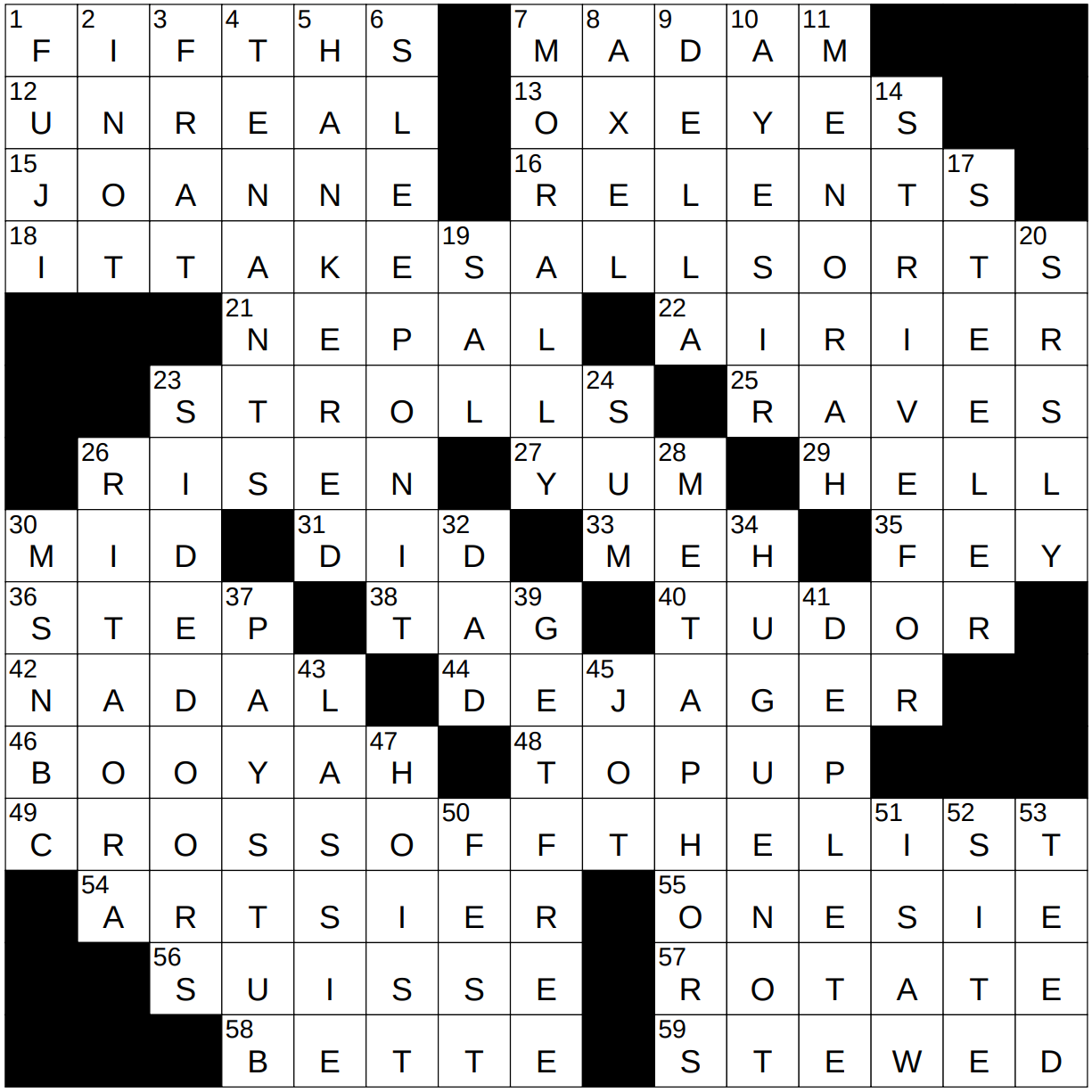 29 Tartarus, by another name : HELL

In Greek mythology, Tartarus was a deep abyss in Hades used to punish the wicked. Tartarus was also one of the Greek primordial deities, the first generation of gods and goddesses.

35 Actress whose nickname derives from her middle name, Stamatina : FEY

The Wars of the Roses was a series of civil wars fought for the throne of England between the rival Houses of Lancaster (with a symbol of a red rose) and York (with a symbol of a white rose). Ultimately the Lancastrians emerged victorious after Henry Tudor defeated King Richard III at the Battle of Bosworth Field. Henry was crowned King Henry VII, and so began the Tudor dynasty. Henry Tudor united the rival houses by marrying his cousin Elizabeth of York. Henry VII had a relatively long reign of 23 years that lasted until his death, after which his son succeeded to the throne as Henry VIII, continuing the relatively short-lived Tudor dynasty. Henry VIII ruled from 1509 until his death in 1547. Henry VIII was the last male to lead the House of Tudor, as his daughter Queen Elizabeth I died without issue. When Elizabeth died, the Scottish King James VI succeeded to the throne as James I of England and Ireland. James I was the first English monarch of the House of Stuart.

42 Decorated athlete whose name could be parsed as “zero” + “loss” : NADAL

55 Outfit with flaps and snaps : ONESIE

In French, “la Suisse” (Switzerland) is a “pays” (country) in the Alps.

2 Playing past regulation, informally : IN OT

9 Reese in “Touched by an Angel” : DELLA

The USS Enterprise was Vice Admiral William Halsey’s flagship. She was also the ship that he was aboard in the Pacific when the Japanese attacked Pearl Harbor. Apparently, Halsey remarked right after the attack, “Before we’re through with ’em, the Japanese language will only be spoken in hell.”

17 Member of the A.F.C. team with most division titles : STEELER

The Pittsburgh Steelers football team was founded in 1933, making it the oldest franchise in the AFC. Back in 1933, the team was known as the Pittsburgh Pirates. The Pirates name was chosen as the Pittsburgh baseball team was the Pirates. The name was changed to the Steelers in 1940, and then the Steagles in 1943 when the team merged with the Philadelphia Eagles. There was a further merger in 1944, with the Chicago Cardinal to form Card-Pitt. The Steelers name was resurrected in 1945.

In Spanish, one might set the “pimienta” (pepper) by the “sal” (salt).

The canine character Lassie is the creation of Eric Knight, an author who wrote a short story that he expanded into a novel called “Lassie Come Home” published in 1940. “Lassie Come Home” was turned into a movie three years later, the first of a very successful franchise. The original Lassie (a female) was played by a long-haired collie called Pal (a male). In fact, all of the dogs that played Lassie over the years were males, because they looked better on camera, retaining a thick coat even during the summer months.

A jot is something very small, with “jot” coming from the Latin “jota”. In turn, “jota” is from the Greek “iota”, which is the smallest letter in the Greek alphabet. The verb “to jot” comes from the noun, in the sense of making a small, short note.

52 One of the few places where traffic is appreciated : SITE

Yes indeed. I am very grateful for traffic to this site …